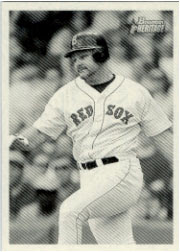 Dante Bichette was part of the exciting quartet of sluggers in the early days of the Colorado Rockies. Of course, like the others, his numbers were inflated somewhat by his home park. Bichette was a promising young player when he went over to Colorado.

Bichette was near the end of his career when the Red Sox acquired him from the Cincinnati Reds during the 2000 season. He still had something left though and hit seven home runs for the Red Sox during the stretch drive and had a slash line of .289/.336/.518/.854 in 30 games.

Bichette returned to the Red Sox the next season and was meant to be the principal designated hitter, but also spent time in the outfield. He was not a terrible fielder, and looked a lot worse than he actually was. 2001 was his last season in the Majors and Bichette hit only 12 home runs with a slash line of .286/.325/.460/.786. He was 37 that year, so not much was expected of him, but with Carl Everett also slumping, Boston was not able to make the playoffs.
Posted by Metallattorney at 4:43 PM