This is part one of a two part post that you can find on my other blog.  A seller on Ebay recently sold a bunch of random 1998 Donruss Crusade insert cards and I picked up a couple.

Here is the one for this blog: 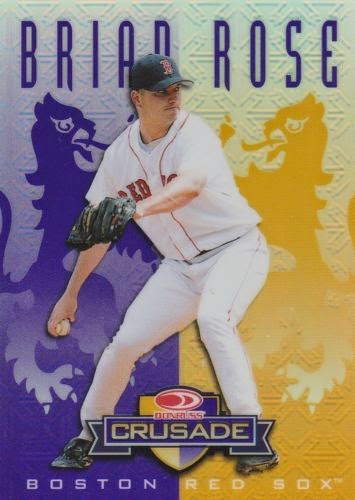 1.  1998 Donruss Crusade Brian Rose.  This was available in the Leaf Rookies and Stars packs as an extended card.  Rose was once supposed to be a terrific pitching prospect for the Red Sox but he never really developed at the Major League level and was eventually dealt away to the Rockies in the deal that brought Rolando Arrojo and Mike Lansing to Boston.
Posted by Metallattorney at 11:21 PM 1 comment:

A couple of recent trades lead me to these cards:

1.  2014 Topps Power Players Gold Jonny Gomes WS.  I was not aware of the existence of these cards.  Apparently these were available as prizes in the Power Players game for Topps this year.  I managed to talk someone into trading this one to me.

2.  2014 Topps Chrome Refractor Koji Uehara.  It will be interesting to see if Uehara is back next year.

3.  2014 Topps Chrome Refractor Dustin Pedroia.  Hopefully Pedroia will recover fully and be back to full strength next season.
Posted by Metallattorney at 9:47 PM 2 comments:

New Chrome with a Sizemore

When I found out that there was actually a Grady Sizemore Red Sox card in both 2014 Donruss and Topps Chrome, I knew I had to track them down.  Sizemore's time in Boston may have been brief, but as a team collector, I have to track down a card of every player that appears with a Red Sox logo on cardboard.  So here it is complete with a card of slightly better Shane Victorino: 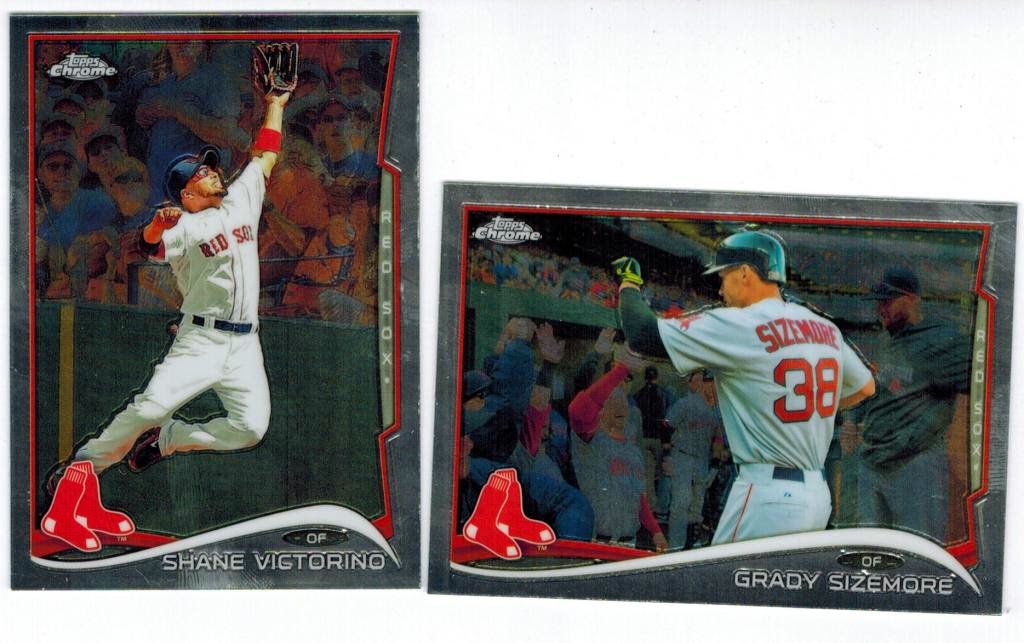 1.  2014 Topps Chrome Shane Victorino.  This is just a terrific action shot in a set full of great photography, but it does not match up to...

2.  2014 Topps Chrome Grady Sizemore.  It is a good thing this is a memorable shot, because Sizemore's time with the Red Sox certainly was not.
Posted by Metallattorney at 8:00 PM 3 comments:

Is the Season Over Yet?

Boston is not going anywhere this year.  About the only thing worth watching is the development of the young players and the emergence of Rusney Castillo.  It has been a trying season all year long and I have had some difficulty truly enjoying collecting the Red Sox.  I have been less active in trades and certainly have not been buying much.  But every once in awhile I manage to make an interesting deal.  This one qualifies: 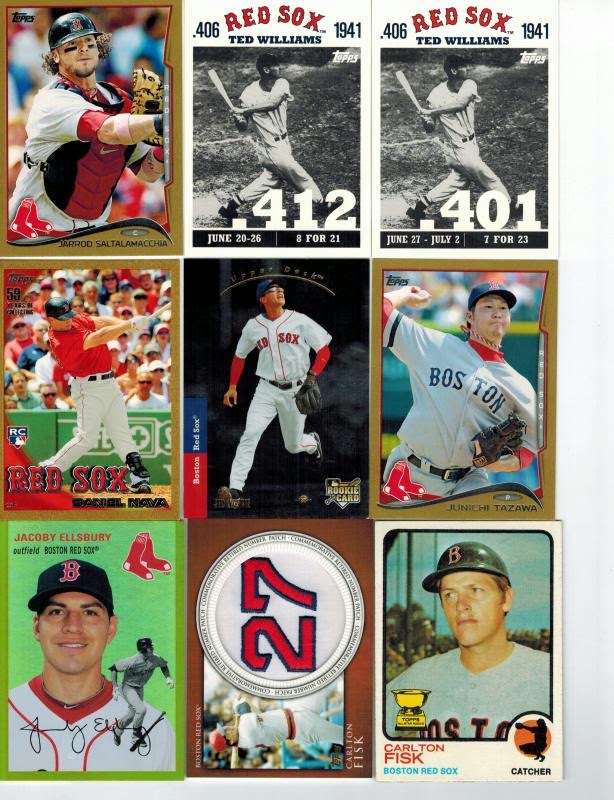 1.  2014 Topps Gold Jarrod Saltalamacchia.  Production from the catcher's position is one of the biggest problems this year.  Saltalamacchia would not have been great, but he would have been better than Pierzynski at least.

4.  2010 Topps Update Gold Daniel Nava.  I like Nava but I suspect he will be squeezed out next year.

5.  2008 Upper Deck Timeline Jed Lowrie.  A card from my wantlist is always appreciated.

6.  2014 Topps Gold Junichi Tazawa.  Tazawa has emerged as a solid middle relief option.  Just don't use him as a closer, or against the Blue Jays.

7.  2012 Topps Archives Gold Jacoby Ellsbury.  It is still nice to add an Ellsbury once in awhile.

8.  2012 Topps Commemorative Retired Number Patch Carlton Fisk.  Unfortunately I already have this one, so I have a double to send off somewhere.

I am a bit behind, so here is one package which was about as random as things can get.  Behold: 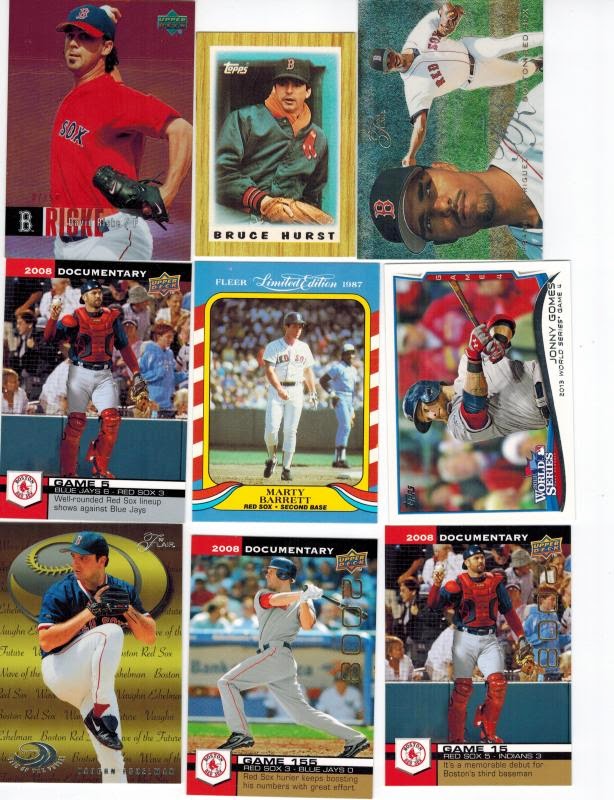 1.  2006 Upper Deck Special FX Red David Riske.  Only my second card of Riske who was acquired in the same trade as Coco Crisp and then dispatched for Javier Lopez.   I previously had a couple of these red cards.

3.  1995 Flair Frank Rodriguez.  I remember when Rodriguez was Boston's top prospect.  It did not work out well.  He struggled in 1995 and then was traded to Minnesota for Rick Aguilera.

4.  1998 Upper Deck Documentary Jason Varitek. Yay, a new Varitek card.  These have been a little rare lately.  Varitek remains the player of whom I have the most cards.  For now.

5.  1987 Fleer Limited Edition Marty Barrett.  Barrett was coming off of a terrific 1986 postseason in which he won the ALCS MVP and racked up a bunch of hits in the World Series.

7.  1995 Flair Wave of the Future Vaughn Eshelman.  Eshelman was a brief flash in the pan in 1995 when he pitched shutout innings in his first start and won his first three.

8.  2008 Upper Deck Documentary Gold Jason Bay.  I liked the Documentary set for the number of cards, but the fact that they were a bunch of the same pictures over and over is kind of a turnoff.

10.  2008 Upper Deck Documentary All Star Kevin Youkilis.  Youkilis had a terrific season in 2008 and finished third in the MVP race.

12.  2014 Topps Gold Shane Victorino.  After a great season in 2013, Victorino only played in 30 games this season.  Boston's outfield is pretty full going into next season, who knows if Victorino will be back?
Posted by Metallattorney at 7:27 PM No comments: 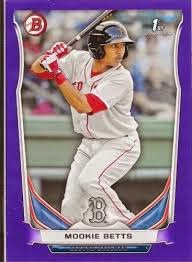 1.  2014 Bowman Prospects Purple Mookie Betts.  Of all of the rookies to spend time in Boston this year, Mookie has been by far the most productive.  He has been playing in the outfield thus far but will be spending some time at second base this week.  Hopefully this is a sign of things to come, but it is also possible that he will be traded.  Hopefully not.
Posted by Metallattorney at 9:31 PM 1 comment:

An Interesting Vintage and Oddball Trade

Here are the most recent pickups as the Red Sox continue to struggle: 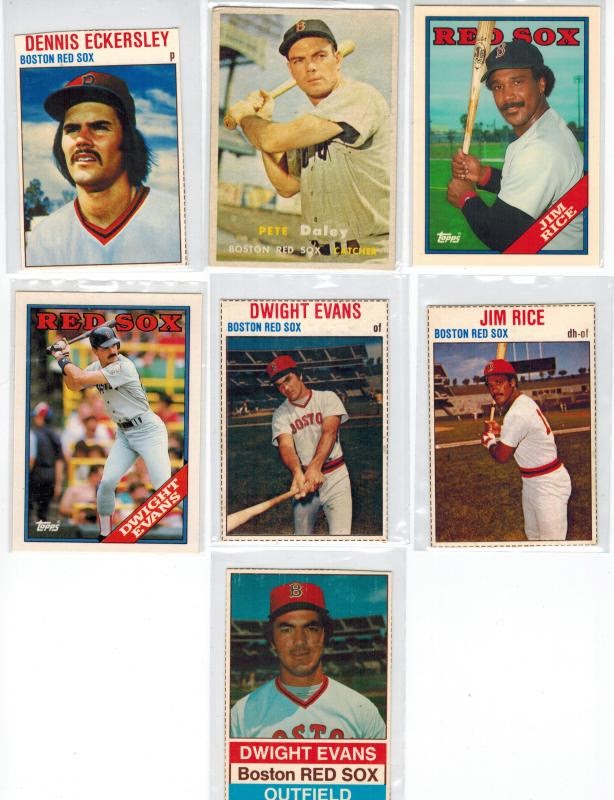 1.  1979 Hostess Dennis Eckersley.  It is kind of lazy that a card with one year of stats with the Red Sox has an airbrushed cap on it.

2.  1957 Topps Pete Daley.  Easily my favorite card from the trade.  Corners are a little soft, but it is 57 years old, which incidentally is my parents' age.

3.  1988 Topps Tiffany Jim Rice.  Rice was starting to go downhill at this point.

The Daley is definitely my favorite, but I do love the oddballs.
Posted by Metallattorney at 10:12 PM 2 comments:

Tom from Angels in Order recently contacted me to set up a Red Sox for Angels trade.  Since my blog trades have been pretty sparse these days I jumped at the chance to gain a new trade partner.  He sent me a bunch of Red Sox and I sent him a bunch of Angels.

Of course the Red Sox and Angels have a nice history together.  Boston was down three games to one in the 1986 ALCS when Dave Henderson single-handedly brought the team back in Game 5 and Boston rolled in Games 6 and 7.  Then Boston swept the Angels in the 2004 ALDS on their way to their first World Series win in 86 years, capped off by David Ortiz's walkoff home run in Game 3.  Boston also swept the Angels in 2007 in the ALDS on their way to another World Series win.  Manny Ramirez hit the game-winning blast in Game 2.  The Angels finally won a game against Boston in the postseason in 2008 but Boston still took that series 3-1.  Then the Angels swept the Red Sox in the 2009 ALDS.  So yeah, tons of history there.

Here are the cards that Tom sent: 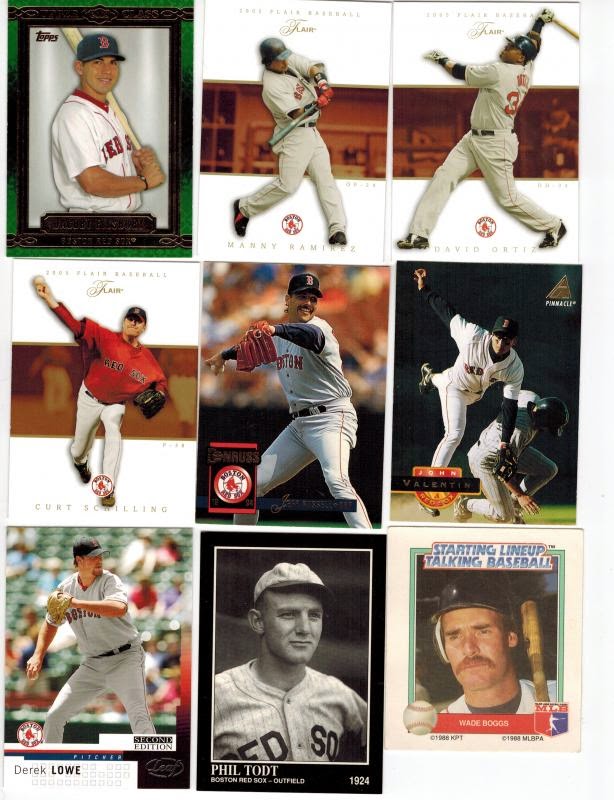 1.  2014 Topps Upper Class Jacoby Ellsbury.  Despite his free agent defection to the Damn Yankees, I will always like Ellsbury.  Boston has just not had a lot of speed over the years.

2.  2005 Flair Manny Ramirez.  For some reason I did not have any of the base Flair cards.  I do have a Jason Varitek auto from that set, but no base.

3.  2005 Flair David Ortiz.  He hit two home runs tonight.  His batting average is down but he is still hitting them out.

6.  1994 Pinnacle John Valentin.  Valentin was an underrated player for a few years in Boston, particularly in 1995 when he could have won the MVP.  I love the double dip shot here.

8.  1992 Conlon Phil Todt.  Todt was one of the few decent players Boston had in the 1920's.  He was one of the few Red Sox players blessed with power, hitting double digits in home runs three times when no one else in Boston was hitting any.  Todt was almost requested by the Yankees in a trade at one point but Boston management, after being burned so many times in trades with the Yankees said no.  Unfortunately the player offered in trade for Todt was Lou Gehrig.  Dammit.

9.  1988 Starting Lineup Talking Baseball Wade Boggs.  This is my first of these cards.  They are wider than I would like.  They are probably not cards I would seek out, but certainly don't mind adding them to my collection. 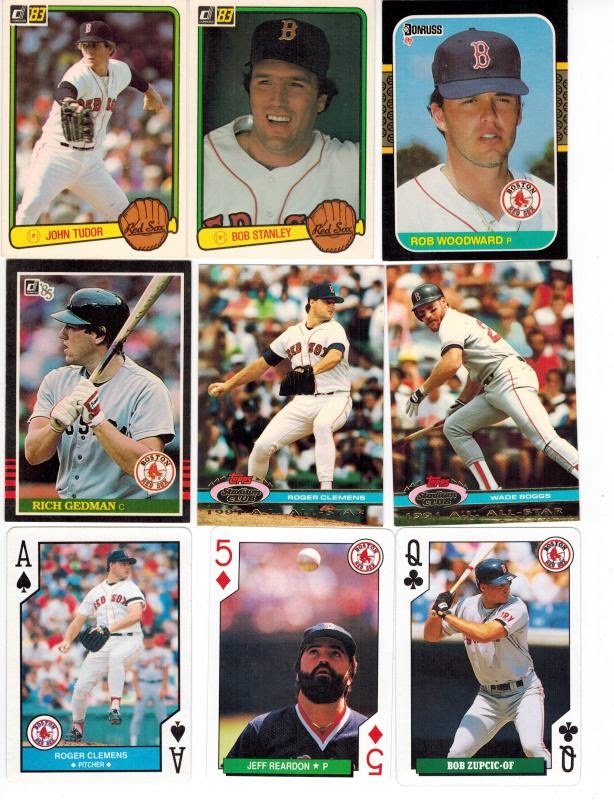 10.  1983 Donruss John Tudor.  Tudor was a gifted pitcher coming up with the Red Sox in the early 1980's when they were flush with pitching prospects.  Tudor, Bruce Hurst, Bob Ojeda, Oil Can Boyd, and Roger Clemens all came up within a few years of each other.  That could have been a terrific staff if they had not traded off Tudor and Ojeda.

16.  1991 U.S. Playing Card Co. Roger Clemens.  I wish they still made sets like this.  Oddball items showing all of the All Stars each season. 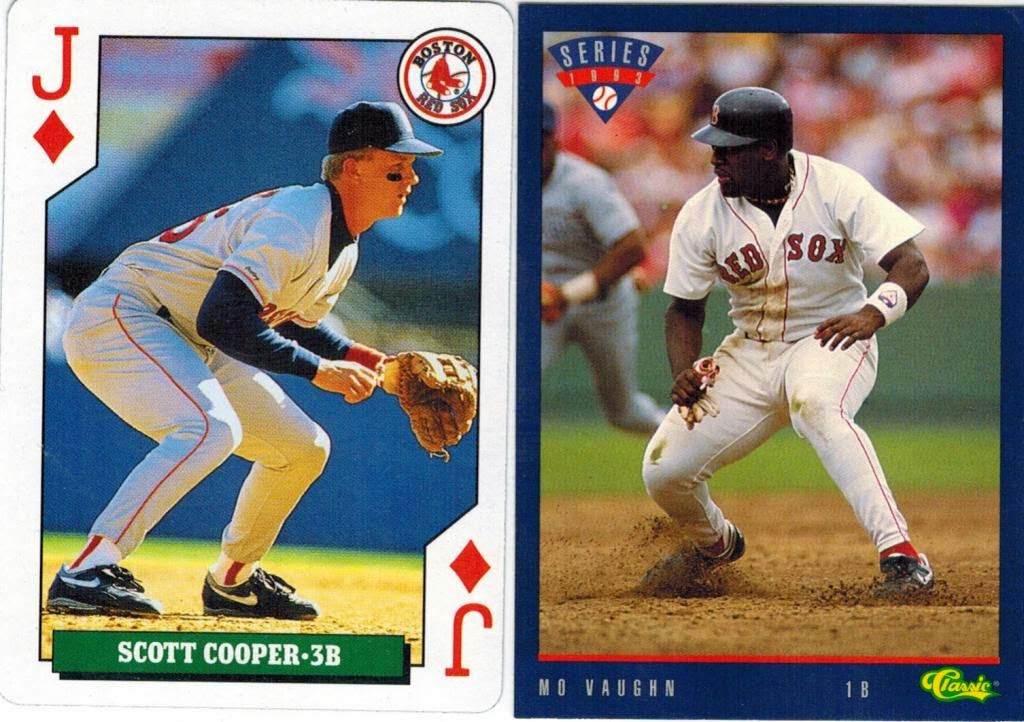 19.  1992 U.S. Playing Card Co. Rookies Scott Cooper.  Cooper had a terrific throwing arm but made a lot of errors because Mo Vaughn was basically a brick wall at first.

Thanks for the cards Tom!
Posted by Metallattorney at 9:27 PM 1 comment: