I have mixed feelings about the return of Topps Total.  The brand meant two things to collectors: 1. player selection and 2. inexpensive.  The return does accomplish the first part, but definitely not the second one.  There are several players in the new Topps Total that do not receive many cards, but packs cost $10.00 for ten cards and are only available online.  They are also being released in nine 100 card waves so you only get ten cards from each wave.

I am tracking down the Red Sox singles and recently picked up the Wave 2 cards.  Matt Barnes and Rick Porcello are not exceedingly rare, though they usually only show up in larger sets.  For Porcello, that's odd since he is a former Cy Young Award winner.  But then there is Heath Hembree, who is the primary reason I went for this lot.  I only had one card of Hembree before and it was a Prizm card, so the team logo was airbrushed out and it came after he was acquired, so it was unlikely that it was a Red Sox card in the first place.  So, of course I went for this.
Posted by Metallattorney at 8:00 AM No comments: 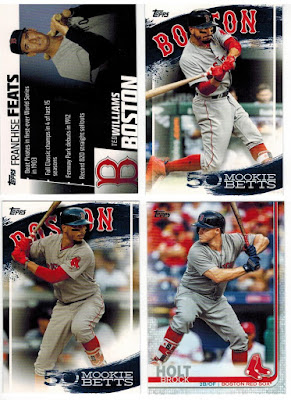 Those are all of the new Red Sox cards I have added from all of those blasters.  Just four cards (there were two duplicates).  Also, you will note that all four are from Topps Series 2.  No Leather and Lumber.  No Stadium Club.  No Prizm.  I did not pull a single Red Sox card from any of those blasters.  Not one.  It is one of my worst cold streaks.  And I'm really annoyed by it.  I know a lot of people that would say just to stop buying packs, but I love the feeling of opening a pack and finding a Red Sox card that I needed.  And I am excited about those cards that I did pull, particularly the Ted Williams insert.  So I will keep opening packs.  The streak has to end somewhere.

At least I'm not a Rangers fan.  Yeesh.

Boston remains on top even though the lead has shrunk.
Posted by Metallattorney at 10:27 AM 4 comments:

I was at the store and just grabbed a hanger pack.  It said it was guaranteed to have two of the Mookie Betts inserts, so I thought why not?

Here are the Red Sox: 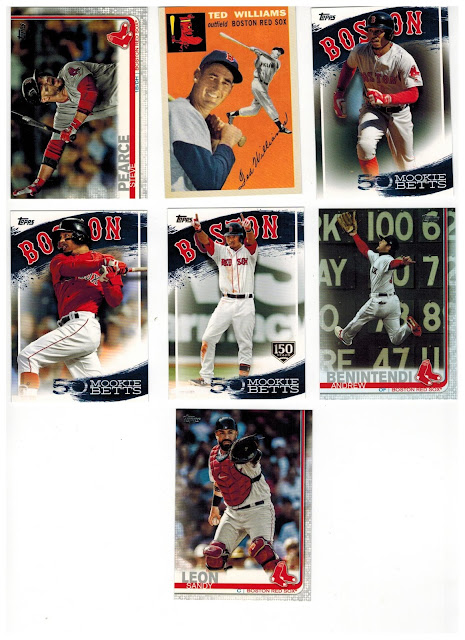 In half the number of cards, I pulled two more Red Sox cards than the previous blasters.  That was pretty damn impressive.  On top of the base cards of Pearce, Benintendi, and Leon, I pulled two of the Mookie inserts, a Ted Williams Iconic card reprint, and the best card of the lot: a Mookie Betts insert that also had the 150 Years parallel stamp.  Not bad at all.

Not shocking to see Boston way in the lead here.

And the Red Sox are now way ahead: nine cards ahead of the second-place team.  The Braves once held such a lead though, so anything could happen.
Posted by Metallattorney at 8:00 AM 1 comment: 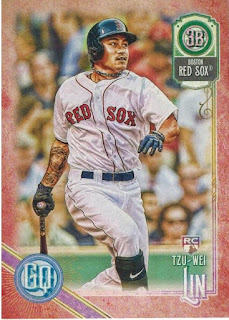 This is quite the rare card.  This is the 2018 Topps Gypsy Queen Red parallel of Tzu-Wei Lin.  It is serial-numbered to just 10.  It was quite the bidding war, but I came out ahead.  Nice to add this one to the new player collection.  As I said before, hopefully Lin will make it back.  With the way Marco Hernandez has been playing though, who knows what will happen.
Posted by Metallattorney at 8:00 AM No comments: