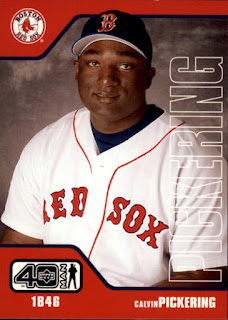 CALVIN PICKERING
The card this time is from 2002 Upper Deck 40 Man. Another huge set, like Topps Total and Pacific Online, this was a great set for team collectors like myself. Pickering was formerly a top prospect in the Baltimore Orioles system, who had eventually worn out his welcome with his inability to make the transition to the Major Leagues.

The Red Sox picked up the big Virgin Islands native from the Cincinnati Reds in a waiver claim near the end of the 2001 season. Pickering played in 17 games for the Red Sox down the stretch. He hit a decent .280/.379/.480/.859 in 58 at bats for the Red Sox who were out of the race. He also contributed three home runs and seven runs batted in while playing mostly first base with a couple of games as the designated hitter.

Pickering spent the entire next season in the Red Sox minor league system and was unable to make it back to the Majors that year. He was allowed to leave as a minor league free agent. Had things worked out differently, Pickering could have been David Ortiz before Ortiz joined the team.

Pickering later played for Kansas City and again produced reasonably well in limited time. I have no idea why Pickering was not able to stick. He seemed to hit just fine.
Posted by Metallattorney at 1:31 PM

Email ThisBlogThis!Share to TwitterShare to FacebookShare to Pinterest
Labels: one card wonder, pickering