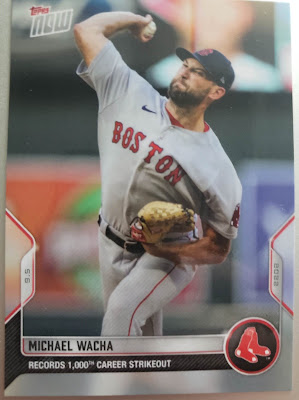 It seems odd after the year that he had that the only Michael Wacha cards available with the Red Sox are Topps Now cards or really high-end relics.  I think that will change since he has yet to officially sign elsewhere.  If he does go somewhere else though, there will be a decision to make as to whether he supplants Hideo Nomo as the All-Time One-Year Right-Handed Starter.

On September 5, Wacha started against the Rays.  It was not one of his better games as the Red Sox lost the game 4-3, but that was not the fault of Wacha.  He pitched six strong innings, giving up just two runs, scattering seven hits and striking out seven batters while not allowing a walk.  He recorded his 1,000th career strikeout in the game.  Wacha did not figure in the decision as Jeurys Familia allowed two runs to take the loss.  Alex Verdugo homered in the game. 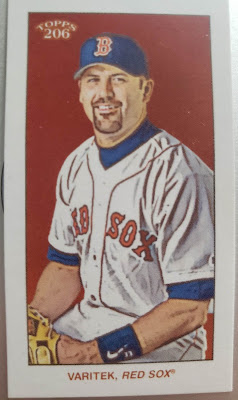 Card #977 comes from 2022 Topps 206.  Am I the only one that is a little frustrated with all of the online-only sets?  What I do like about this card is that it is mini-sized, the size of the original T206 cards.  It certainly captures the feel of the cards.  An interesting thing I noticed is that Varitek's jersey does not feature the "C" for Captain on this card.  That seems a little surprising.  23 to go.
Posted by Metallattorney at 8:30 AM No comments:

Email ThisBlogThis!Share to TwitterShare to FacebookShare to Pinterest
Labels: varitek 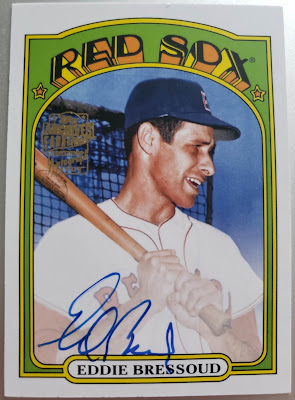 One of my most anticipated sets each year is Topps Archives.  Not because I like the set itself, but because of the Fan Favorites autograph set.  Fan Favorites was one of my favorite sets when it came out in 2003 and I collected it the next two years.  It was such a cool idea.  Bringing a lot of players back that were popular, but maybe not the best players.  There were plenty of stars too.  Fan Favorites only exists at this time in the form of the autographed set in Archives, but the idea is the same.  Previous years have seen autographed Red Sox cards for players like Mike Greenwell, Ellis Burks, Rich Gedman, Kevin Millar, Mike Timlin, Jose Offerman and Carl Everett.  Last year's set was kind of disappointing because the only Red Sox player was the uber-short-printed Nomar Garciaparra.  I would much rather have an under-the-radar player that I can find easily.  Which brings us to 2022.

There are still two premium autographed cards.  Roger Clemens and Wade Boggs will be tough to find.  But, this Eddie Bressoud card was not.  This is exactly the kind of player I want to see.  Shortstop Bressoud played for the Red Sox from 1962 through 1965 after being acquired in a trade with the Giants for Don Buddin.  Boston got the better end of the deal as Bressoud found hitting in Fenway to his liking.  For Boston, he hit .270/.337/.435 with 57 home runs, 115 doubles and 208 RBIs.  He hit a career-high 20 home runs in 1963.  He was an All Star the next season when he hit a career-high .293/.372/.456.  The Red Sox were not great in those years, but Bressoud was a solid player.

The only complaint I have with this card is the design used.  This is the 1972 design and Bressoud was out of baseball long before then.  I think it should have been a 1963 or 1964 design.  Otherwise, this is a great card, and one of my favorites of the year.  Bressoud was definitely a surprising choice for an autograph card in 2022.

I feel like I have been doing way too many Topps Now posts lately.  Unfortunately, due to the retail scarcity most of the year, Topps Now made up most of my card buys in 2022.  One day though I went on a binge of buying a bunch of singles.  And this was the result: 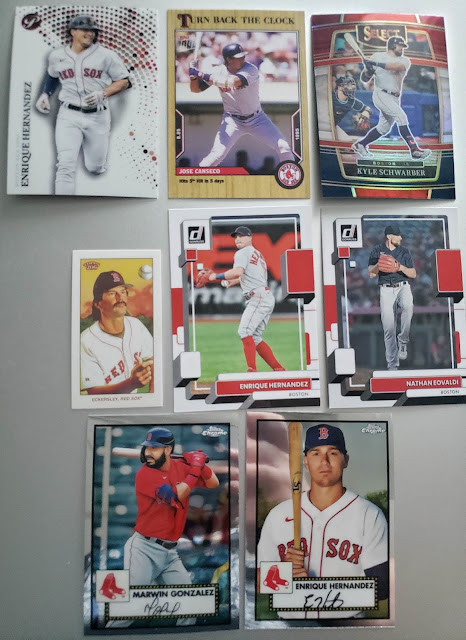 1.  Enrique Hernandez.  Hernandez was kind of my focus in these buys, as will be seen.  I decided I needed a few more cards of the 2021 postseason hero.  So, this Topps Pristine card was the first buy.

2.  Jose Canseco.  This is a Topps Now Turn Back the Clock card that I had to grab because there are not many Canseco cards with the Red Sox these days.  This one commemorates Canseco hitting five home runs in five games in August, 1995.  Had he not gotten hurt in 1996, Canseco might have had one of his greatest seasons.  He hit .289/.400/.589 with 28 home runs and 82 RBIs in just 96 games.

3.  Kyle Schwarber.  Schwarber will go down as one of Boston's best trade deadline acquisitions.  He was hurt when he was picked up, but hit seven home runs and had a .435 OBP.  He was good in the postseason too.

5.  Enrique Hernandez.  Here is #2 of Hernandez, this one from Donruss which was pretty good to me in packs, but I only managed to get two blasters all year.

6.  Nathan Eovaldi.  Another base card from Donruss that eluded me.  Eovaldi will be missed in the rotation this season.

7.  Marwin Gonzalez.  Here we come to a couple of the 2021 Topps Chrome Platinum Anniversary cards.  This was a huge team set that I am still working on.  Gonzalez did not do much in Boston, and accordingly he didn't get many cards, so I had to grab this one.

8.  Enrique Hernandez.  And we close things out with Hernandez #3. 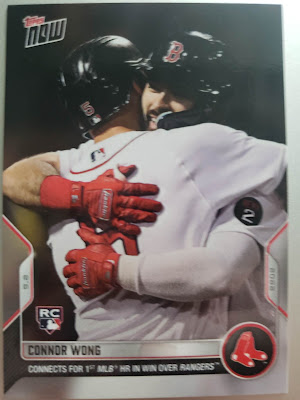 Connor Wong received his first extended look in the Majors in 2022.  The catcher was acquired from the Dodgers in the Mookie Betts trade.  He did not produce a lot, but was steady behind the plate.

On September 2, the Red Sox defeated the Rangers 9-1.  Wong started the game at catcher and hit his first Major League home run, a two-run shot.  It was his only hit of the game.  Nick Pivetta started the game, but was pulled after three innings.  Reliever Tyler Danish got the win.  Xander Bogaerts, Rafael Devers, J.D. Martinez and Enrique Hernandez each had two hits.  Hernandez and Arroyo joined Wong as hitters driving in two runs.

Wong, Reese McGuire and Jorge Alfaro will compete in the Spring for the catching platoon. 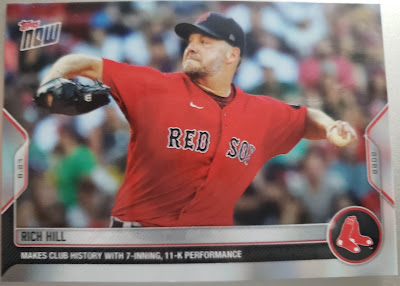 Let's talk about Rich Hill today.  He was once one of the longest-tenured members of the Red Sox With No Cards club (Andrew Miller and Scott Atchison are also in the running).  Hill had done several stints with the Red Sox and pitched with them from 2010 through 2012, then again in 2015.  He came back to Boston once again in 2022, this time as a starter guaranteed a job.  And finally, we started getting cards of him.

Hill did basically what was expected of him in 2022.  He had a record of 8-7 with a 4.27 ERA, keeping the team in games.  His terrific curveball allowed him to strike out 109 batters in 124.1 innings pitched.  He only walked 37 batters.  As long as he can keep doing that, he should be able to stay in the Majors and he will pitch for the Pirates in 2023.

He had his best game of the 2022 season on August 27.  In a game against the Rays, pitching against Jeffrey Springs (who is another Red Sox With No Cards), Hill threw seven masterful innings.  He struck out eleven, while allowing just three hits and a walk.  He did not allow a run.  Jeurys Familia allowed a run and three hits in two-thirds of an inning and John Schreiber came in to slam the door.  They are also both Red Sox With No Cards, though I think Schreiber might appear this year.  The offense in the game was provided by Enrique Hernandez (who homered), Alex Verdugo and Rafael Devers.  Boston won 5-1.

Two for the price of one today. 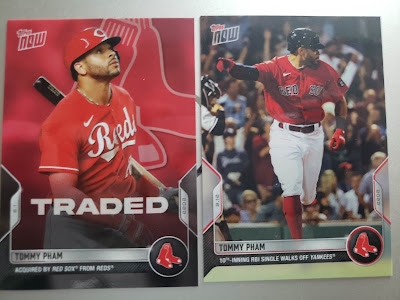 August 2, 2022 was the trading deadline, and Boston had a strange day.  The Red Sox traded away one of my favorite players, Christian Vazquez, for prospects.  That is an understandable move as Vazquez was coming up for free agency and Boston was going nowhere.  The prospects look pretty good too.  Then they traded Nebraska native Jake Diekman to the White Sox for Reese McGuire, which is fine, but more of a lateral move and just served to have a warm body behind the plate after trading away the starting catcher.  McGuire was pretty good for the Red Sox in 2022 though.  Then, they traded Nick Northcut to the Reds for Tommy Pham, shown above.  Which is odd, since he is an upgrade, when they traded away their starting catcher.  Then, they traded stalled pitching prospect Jay Groome to the Padres for Eric Hosmer and two prospects.  But, they did not trade Nathan Eovaldi or J.D. Martinez.  So it was an odd trading deadline for the Red Sox.

So, this will be a Tommy Pham post.  Pham was Boston's biggest trade deadline acquisition, and I have to say, I became a big fan immediately.  He did not take long to make an impact in the Red Sox/Yankees rivalry.  On August 12, Boston got six strong innings from Eovaldi, but were losing 2-1 in the bottom of the ninth inning.  With one out and two runners on base, Martinez singled to tie the game.  The game went to extra innings and Pham came to the plate with two runners on in the tenth and promptly singled down the left field line off Lou Trivino to walk it off for Boston.  It was his only hit of the day, but it was a big one.

In 53 games with the Red Sox, Pham ended up hitting .234/.298/.374 with six home runs and 24 RBIs.  Those are not great numbers, but he played with an intensity that the team seemed to be lacking in 2022.  He was a fun player to watch.  Unfortunately, he will not be back in Boston in 2023.  So, he will go down as a One-Year Wonder.  I will get to the 2022 One-Year Wonders later and determine if any of them will challenge my earlier picks for best at their positions.  There are some interesting debates.  One could be a big one, but I am still waiting to see where he lands.