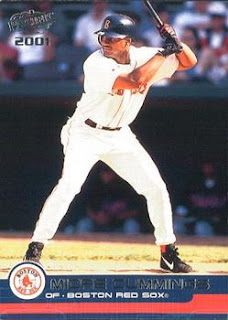 MIDRE CUMMINGS
Midre Cummings actually spent parts of two seasons with the Red Sox. Yet, he only has the 2001 Pacific card in a Red Sox uniform. No scan again, sorry. One of these days, when I open my office I will have a scanner.

Cummings was originally picked up off waivers from the Reds in 1998. During that season he played in 67 games as a backup outfielder. Then, he batted .283/.381/.475/.856. Pretty decent numbers for a backup really. He also hit five home runs and drove in 15. Nevertheless, Cummings was released during Spring Training in 1999.

Email ThisBlogThis!Share to TwitterShare to FacebookShare to Pinterest
Labels: cummings, one card wonder