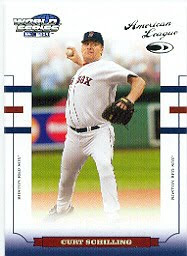 CURT SCHILLING
It will be a few more years before Schilling is eligible for the Hall of Fame. But when he is, there should be little question that he belongs, despite what Dan Shaughnessy says.

Curt Schilling does not have a sparkling record. His 216-146 mark is not eye-popping, but his other numbers make up for it. Schilling's career ERA is 3.46, pretty decent for the era in which he pitched. He also racked up 3,116 strikeouts, compared to just 711 walks. His career WHIP is 1.137. Most pitchers are not that good at preventing baserunners over the course of just one season, much less their entire careers. His career WAR is 69.7, well ahead of several pitchers already in the Hall.

Some would point to his lack of awards as a negative against his career, but Schilling was a six time All Star and finished second in the Cy Young vote three times and fourth once. He finished in the top ten in the MVP vote twice. Schilling was clearly one of the best pitchers in the league several times. He won 20 games three times and struck out 300 or more batters three times.

Schilling was also a great postseason pitcher. He won the co-World Series MVP along with Randy Johnson in 2001 and of course, there's the Bloody Sock.

THE VERDICT
He's in, clearly. The only question is which hat he should wear and my feeling is that it should be a Red Sox cap, due to the Bloody Sock and 2004.
Posted by Metallattorney at 1:25 PM

Email ThisBlogThis!Share to TwitterShare to FacebookShare to Pinterest
Labels: hall of fame, schilling