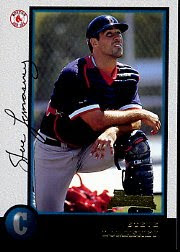 STEVE LOMASNEY
The Red Sox have had some troubles developing catchers since the early 1980's when Rich Gedman emerged. Since then, John Marzano, John Flaherty, Eric Wedge, and Scott Hatteberg all came from the Red Sox minor league system, none of whom made a single All Star game with the team. Steve Lomasney was supposed to change that. He was hyped to be the second coming of Carlton Fisk.

He played one game in the Major Leagues with Boston in 1999 and was hitless in two at-bats with two strikeouts.
Posted by Metallattorney at 12:08 PM