A couple of quick base cards came in from my Wantlist today: 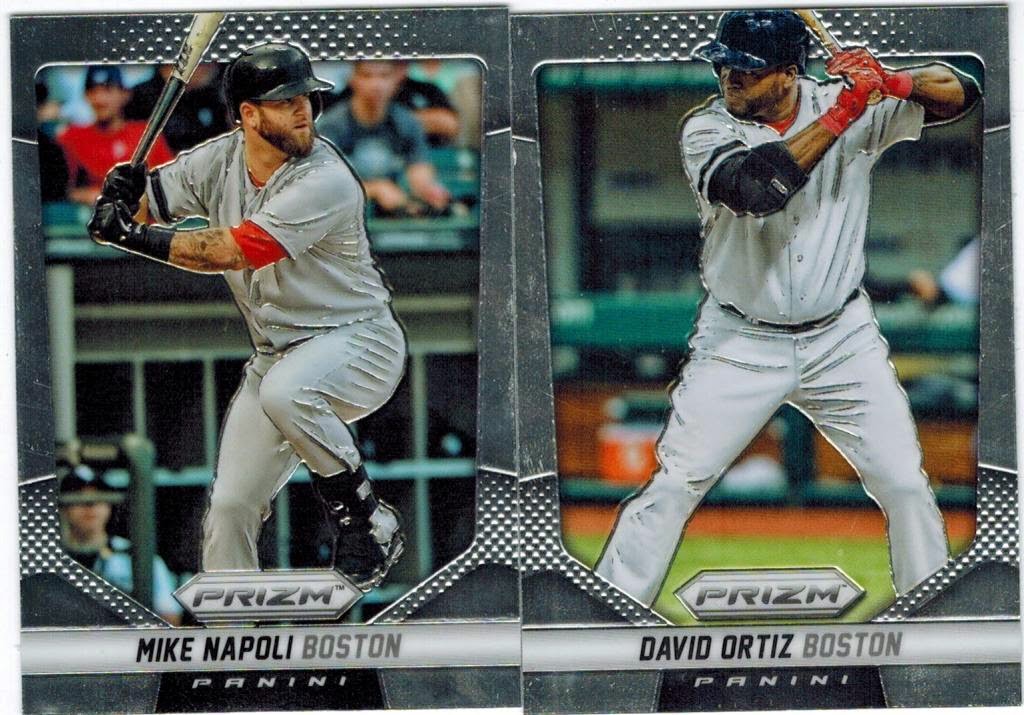 1.  2014 Prizm Mike Napoli.  If he were healthy all season, he would be having a better season.  As it is, he has been pretty good.

They have been hard to watch lately, but I am still working on picking up cards.  Today was a good one from a three pack of Prizm with three Red, White, & Blue Pulsar parallels. 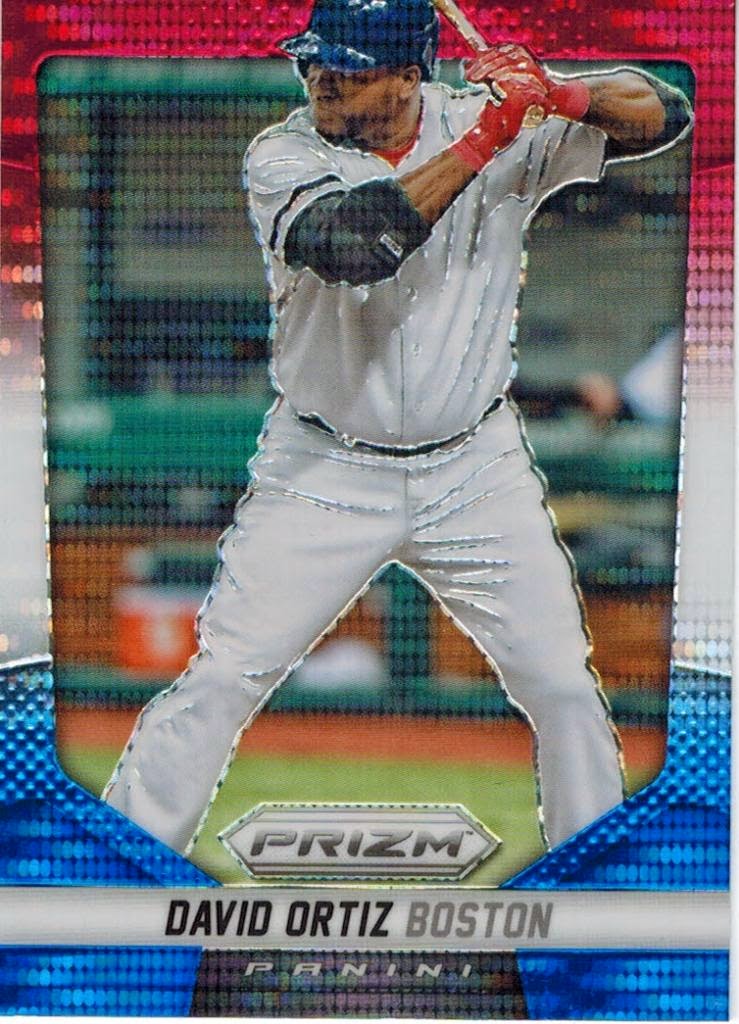 1.  2014 Prizm Red, White, & Blue Pulsar David Ortiz.  Yay, I got one of the special parallels.  I think these would look even better with team logos.  But man, this is a nice card of Ortiz, who just hit his 30th home run tonight.
Posted by Metallattorney at 10:55 PM 1 comment:

Today was just a one-card mailday. 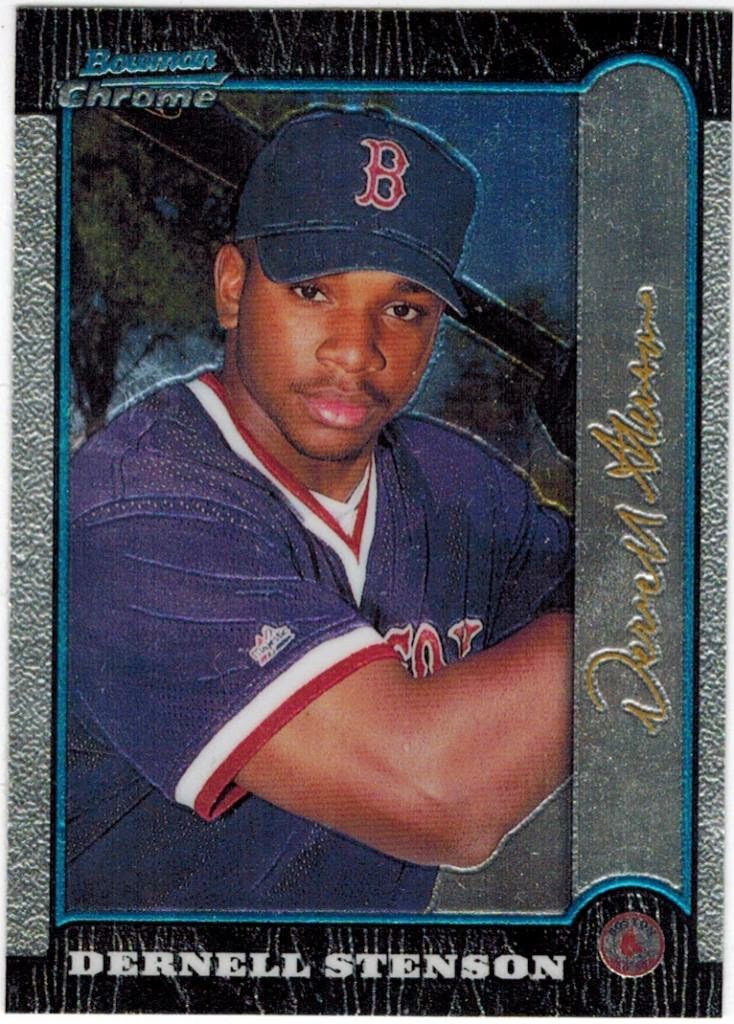 1.  1999 Bowman Chrome Gold Dernell Stenson.  Stenson is a tragic story.  He rocketed through the minor leagues with the Red Sox and then stalled in Triple A for four seasons.  I don't know why.  He was hitting, but it seemed he was constantly blocked.  Eventually he left as a minor league free agent and joined the Reds organization where he finally made his Major League debut in 2003.  He played in the Arizona Fall League after the season, unfortunately that is where his career, and life, ended.  Stenson was murdered for reasons that are still unclear.  He was bound, shot in the head and chest, and run over with his own car.  Four individuals were arrested and three were convicted.  A sad tale for a gifted young player.
Posted by Metallattorney at 8:38 PM 1 comment:

Holy crap.  I just received the latest package from Mark Hoyle who has been firing off vintage Red Sox cards to me for some time.  He is easily one of the most generous trading partners I have found in the blogosphere.  This one though is really something: 1.  1962 Topps Ted Wills.  This is one of my favorite Topps designs.  I am not overly familiar with Wills, but one previous owner decided the card needed to be updated with his trade to the Reds.

2.  1963 Topps Russ Nixon.  I like this design as well.  Boston unfortunately did not have much luck with catchers for a long time.  Nixon was not very good.

3.  1965 Topps Felix Mantilla.  Coming off of a 30 home run season, Mantilla had been a utility player most of his career to that point.

4.  1966 Topps Jose Santiago.  Santiago hit a home run in his first World Series at-bat in 1967.  Here he is wearing something that is clearly not a Red Sox uniform.

6.  1976 Hostess Denny Doyle.  Doyle was a huge pickup down the stretch in 1975 though he did have a bit of a hiccup on the basepaths in the World Series.

7.  1973 Topps Phil Gagliano.  I really have nothing to say about Gagliano.

8.  1969 Globe Imprints Reggie Smith.  I have argued before and I will argue again: Smith belongs in the Hall of Fame. 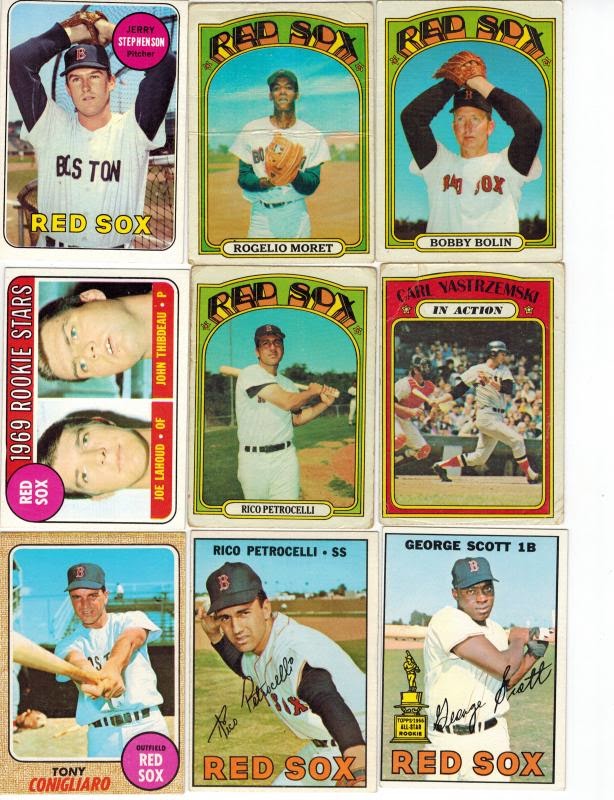 10.  1969 Topps Jerry Stephenson.  Stephenson was supposed to be a huge star, but he never really developed.

13.  1969 Topps Joe Lahoud/John Thibdeau.  Lahoud lasted a few years trying to break through the Red Sox outfield but was shipped off to Milwaukee in the Billy Conigliaro/George Scott trade that brought back Tommy Harper and Marty Pattin, among others.  Thibdeau never made it.

14.  1972 Topps Rico Petrocelli.  Petrocelli once held the AL record for home runs by a shortstop (40), but lost in that is the fact that he was a terrific defensive player.

15.  1972 Topps Carl Yastrzemski IA.  I liked these In Action cards.  I think Doug Griffin is the only one I still need.

16.  1968 Topps Tony Conigliaro.  This card is from the year after his tragic beaning that would eventually lead to the end of his career.

17.  1967 Topps Rico Petrocelli.  This is just a terrific-looking vintage card.  It is too bad Petrocelli is nearly forgotten by fans these days. 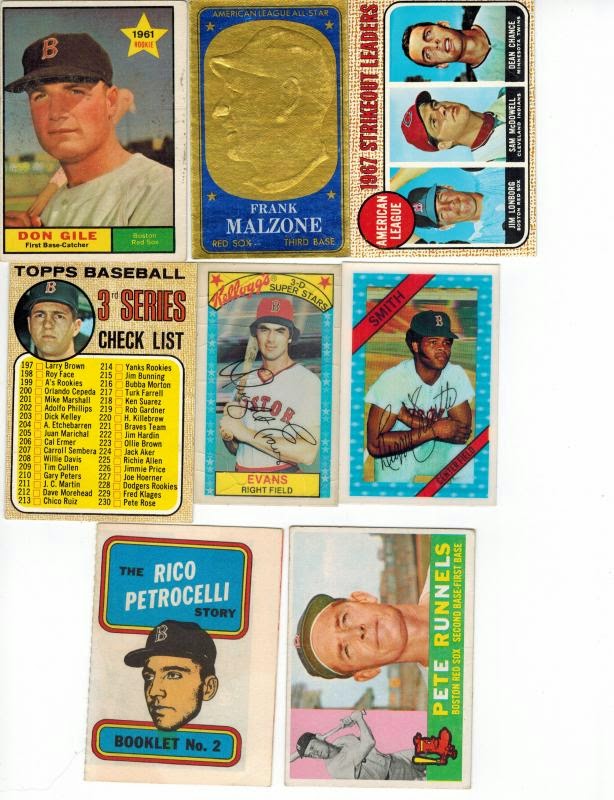 19.  1961 Topps Don Gile.  Mark pays close attention to my wantlist, knowing that I want vintage Red Sox catchers.  Gile is another one, joining the Russ Nixon from earlier.

20.  1965 Topps Embossed Frank Malzone.  Another forgotten star, Malzone was a terrific defensive third-baseman who had some nice offensive seasons as well.

25.  1968 Topps Booklet Rico Petrocelli.  This is kind of an interesting item, a little mini comic book.

26.  1960 Topps Pete Runnels.  Runnels won two batting titles for the Red Sox, and might have won one more had Ted Williams not won it on the last day of the season.

So yes, another terrific package from the always reliable Mark Hoyle.  Thanks Mark!
Posted by Metallattorney at 11:31 PM 2 comments:

I was visiting the in-laws and my parents in my hometown over the weekend and actually had the time to visit the local card shop.  Despite the fact that my visits are becoming more and more rare, the owner still puts aside Red Sox cards for me.  He no longer saves every single auto or relic, but he still saves the parallels and base.  And thus, I picked these up: 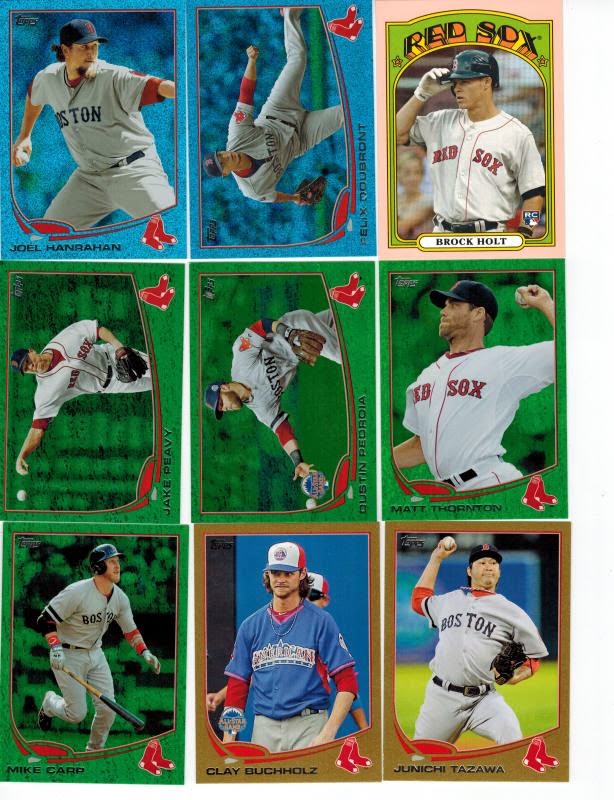 1.  2013 Topps Blue Sparkle Joel Hanrahan.  One of many bad trades for closers that Boston has made recently.  Hanrahan was inconsistent for the first two weeks and then had to get Tommy John surgery.

2.  2013 Topps Blue Sparkle Felix Doubront.  I am disappointed by how things worked out with Doubront.  I was really excited to see him develop and he just could not take the next step forward.

4.  2013 Topps Update Emerald Jake Peavy.  Last year's big pickup at the trade deadline (for Jose Iglesias and others) was sent to the Giants recently for a couple of young arms.

5.  2013 Topps Update Emerald Dustin Pedroia AS.  Pedroia is having a bit of a down season, just like the rest of the team.

6.  2013 Topps Update Emerald Matt Thornton.  Thornton was recently traded from the Yankees despite having a very good season.

8.  2013 Topps Update Gold Clay Buchholz AS.  Whenever I see Buchholz's name as the starting pitcher, I cringe.  Just no idea what to expect.

9.  2013 Topps Update Gold Junichi Tazawa.  He has become a bit homer-happy lately, which has been very frustrating.
Posted by Metallattorney at 11:08 PM No comments:

I bought another three-pack package yesterday and again pulled one card.  Not bad. 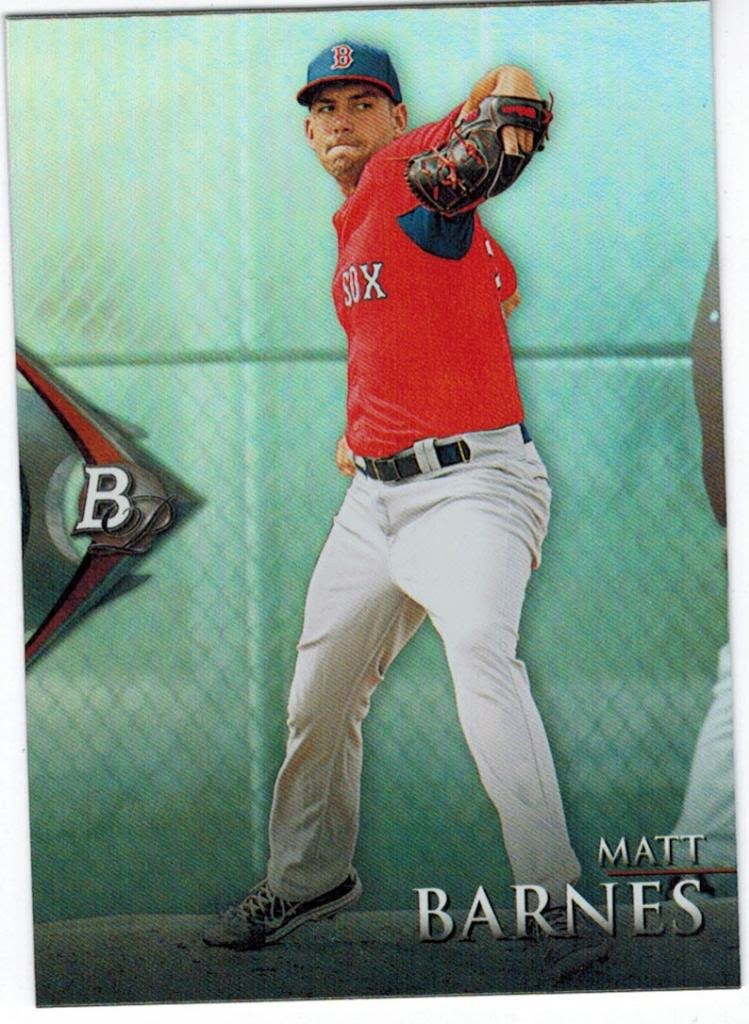 1.  2014 Bowman Platinum Prospects Matt Barnes.  Barnes has been struggling this year and has been passed by some other pitching prospects, but he may still have a bright future.
Posted by Metallattorney at 8:08 PM No comments:

Waiting Til Next Year for the Red Sox

While Boston has been toiling in last place this year, it is important to remember that they just won the World Series last year.  It is not so bad to be a Red Sox fan.  The Cubs on the other hand...

Which brings me to my post.  I received a surprise package from P-Town Tom of Waiting 'til Next Year. 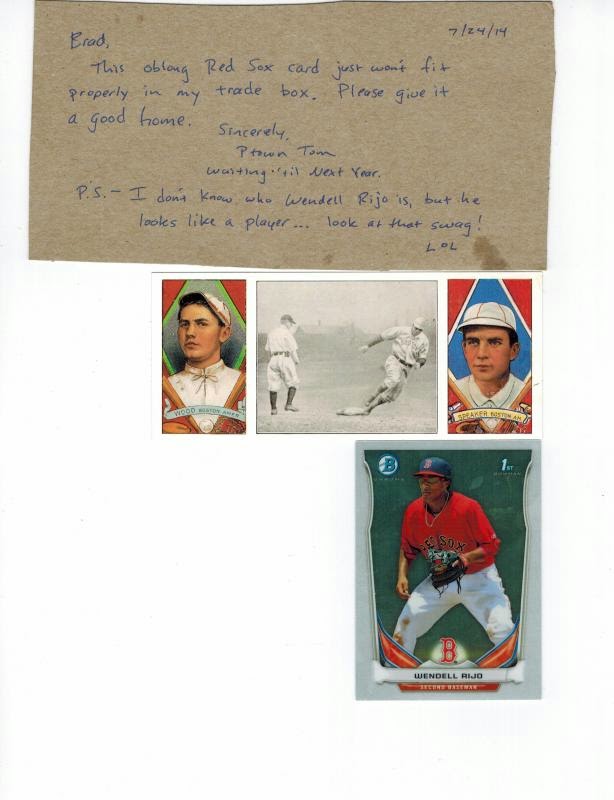 First of all, the note.  I love it, especially the mention of how much of a player Wendell Rijo looks like.  And yes I will give the oblong card a good home.

1.  1993 Upper Deck BAT Tri-Folder Joe Wood/Tris Speaker.  I am somewhat familiar with these cards.  I have one for Cecil Cooper in my Red Sox collection.  These cards were released in a joint effort by the Baseball Assistance Team (BAT) which was a program developed to help former Major League players adapt to life in the real world, deal with drug problems, and a variety of other issues.  This card features two huge stars from the 1912 World Championship team.

2.  2014 Bowman Chrome Prospects Wendell Rijo.  Unfortunately I had this one already, but I wanted to show off the entire package.

Thanks Tom!  I owe you some Cubs.
Posted by Metallattorney at 11:17 PM 1 comment:

I bought one of the three-packs of 2014 Bowman Platinum yesterday with three purple parallels.  Not much to show off other than this one: 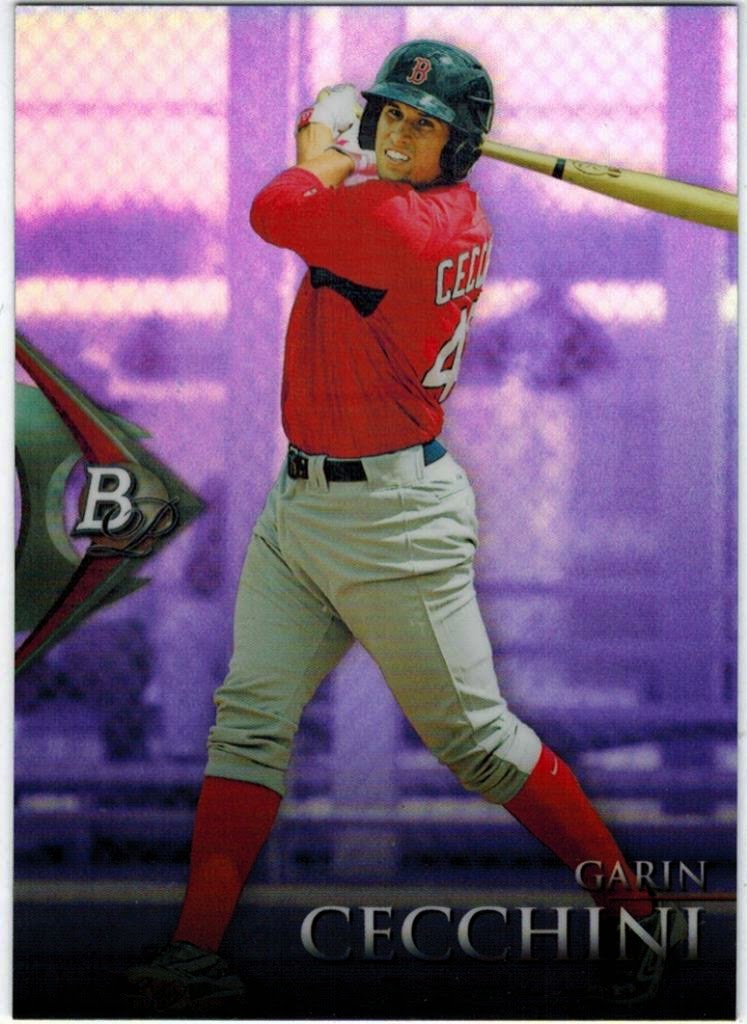 1.  2014 Bowman Platinum Chrome Prospects Purple Garin Cecchini.  Next in line for third base if Will Middlebrooks struggles is Garin Cecchini.  He gets on base and he hits the ball hard.  He did play briefly earlier this season and impressed.
Posted by Metallattorney at 11:02 PM No comments: