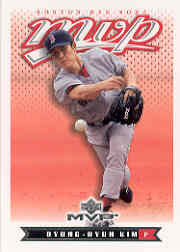 I know I am probably in the minority here, but until he gave the finger to the Red Sox fans, I really liked Byung-Hyun Kim. The diminutive (5'9" and 175 lbs.) pitcher from South Korea with the funky sidearm delivery was a lot of fun to watch. When he was pitching well, he was unhittable. It was unfortunate that Boston had him towards the end of his effectiveness as a pitcher.

Kim was acquired in a trade with the Arizona Diamondbacks partway through the 2003 season for Shea Hillenbrand, who threw a massive tantrum. The Red Sox had been trying out a closer-by-committee approach that year which was an unmitigated disaster. Kim was acquired to solidify the back of the bullpen, and for the most part succeeded. Kim went 8-5 with a 3.18 ERA and 69 strikeouts in 79.1 innings, with only 18 walks allowed. Kim saved 16 games. Later in the year though, he began to have difficulties and he did not pitch more than one game in the postseason. Kim was being groomed to be a starter the next year.

In 2004, Kim suffered through several serious injuries and only pitched in seven games, starting three of them. After the season, Boston decided to cut ties with him and traded him to Colorado for Charles Johnson (who was immediately released) and Chris Narveson.

Kim hung on for a few more seasons with Colorado and Florida, but never even came close to matching his successful 2003 season.
Posted by Metallattorney at 1:12 PM