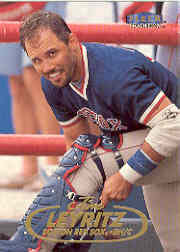 JIM LEYRITZ
I liked Jim Leyritz and was excited when he was acquired. Leyritz was acquired in a trade with the Rangers along with Damon Buford for Aaron Sele, Mark Brandenburg, and Bill Haselman.

Leyritz was initially going to platoon at catcher with Scott Hatteberg and DH with Reggie Jefferson. The emergence of Jason Varitek and the good year by Reggie Jefferson limited his playing time though and he complained his way into a trade to San Diego.

Leyritz was traded in June for Carlos Reyes, Dario Veras, and Mandy Romero. Reyes was a decent bullpen arm, but neither of the other two did anything of consequence.
Posted by Metallattorney at 4:02 PM

Email ThisBlogThis!Share to TwitterShare to FacebookShare to Pinterest
Labels: leyritz, one year wonder