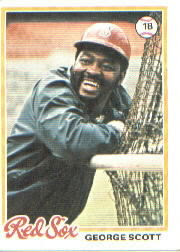 GEORGE "BOOMER" SCOTT
George Scott was one of the first African American stars for the Red Sox, and the team's first African American All Star. He arrived in the Major Leagues in 1966 with the Red Sox and played in every game that year, hitting 27 home runs, driving in 90 runs and a slash line of .245/.324/.433/.757. He finished third in the Rookie of the Year race behind Tommie Agee, whose overall numbers were similar to Scott's.

Scott improved on his overall numbers for the pennant winning Red Sox in 1967 and looked to be a big upcoming star. He won the first of his eight Gold Gloves that year and hit .303/.373/.465/.839 with 19 home runs and 82 RBIs. He also stole ten bases for a great all-around year.

Unfortunately, his numbers took a massive tumble in 1968 when he hit only .171/.236/.237/.473 with three home runs and 25 RBIs. He did win his second Gold Glove, but that was the only bright spot. He improved significantly each of the next two seasons and looked like his career was back on track.

Scott was traded to the Brewers in a huge trade prior to the 1972 season along with several other players for Tommy Harper and a couple of others. With Milwaukee, Scott became a well-known power hitter, leading the league in home runs and RBIs in 1975. He was traded back to Boston in 1977 for Cecil Cooper, which was not a great trade. Scott had his last big season in 1977 hitting 33 home runs with 95 RBIs.

THE VERDICT
No. Scott had some great individual seasons, but his career falls well short. He was great defensively, but probably not among the best ever. He does not rise to the Bill Mazeroski/Ozzie Smith/Harry Hooper level of defensive greatness to get in with his glove.
Posted by Metallattorney at 12:48 PM

Email ThisBlogThis!Share to TwitterShare to FacebookShare to Pinterest
Labels: hall of fame, scott