I recently participated in the Stadium Club break over at Nachos Grande.  I had hoped for an autograph, since there would be six of them.  Unfortunately no luck with that one, but some nice photos and an Ortiz insert would be coming my way: 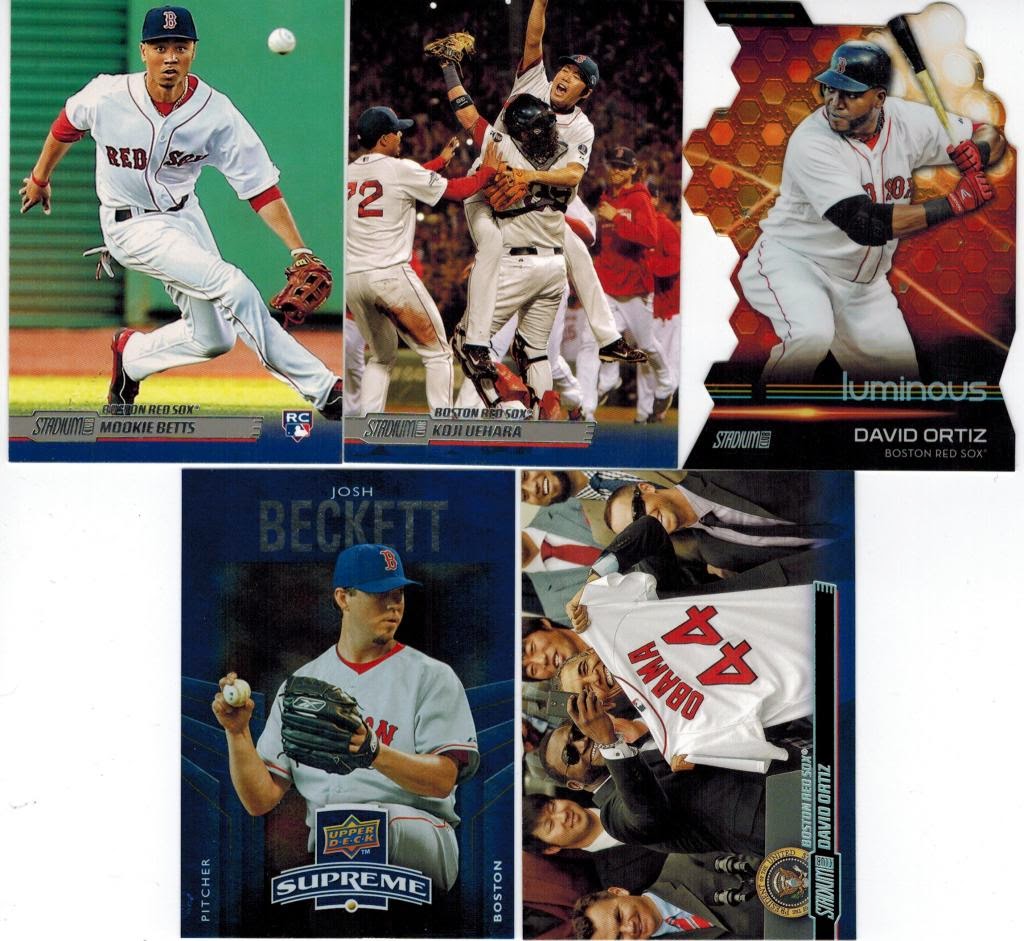 1.  2014 Stadium Club Mookie Betts.  Betts is one of the only rookies Boston called up who actually met expectations.  With the two new signings the Red Sox made, Betts's future is in doubt a little bit.  He will be in the mix for the right field/utility spot, or he could be traded.  Let's hope it is the former.

2.  2014 Stadium Club Koji Uehara.  Happier times.  This is after the last out of the World Series.

3.  2014 Stadium Club Luminous David Ortiz.  The best card from the lot is this die-cut insert of Big Papi.

4.  2008 Upper Deck Supreme Blue Josh Beckett.  Chris threw in some random cards as well.  This was the only one I did not have.

5.  2014 Stadium Club David Ortiz.  I love this card.  The selfie with Barack Obama after winning the World Series was a great moment and captured wonderfully here.

Thanks Chris!
Posted by Metallattorney at 11:15 AM 2 comments:

I have picked up a couple of 2014 Topps Update Blasters recently and have had some good luck.  At least for number of Red Sox cards pulled.  This is counter to my luck the rest of the year in packs.  I like opening packs because of the risk, but this has been a frustrating year overall.

Here are the pulls from the first blaster: 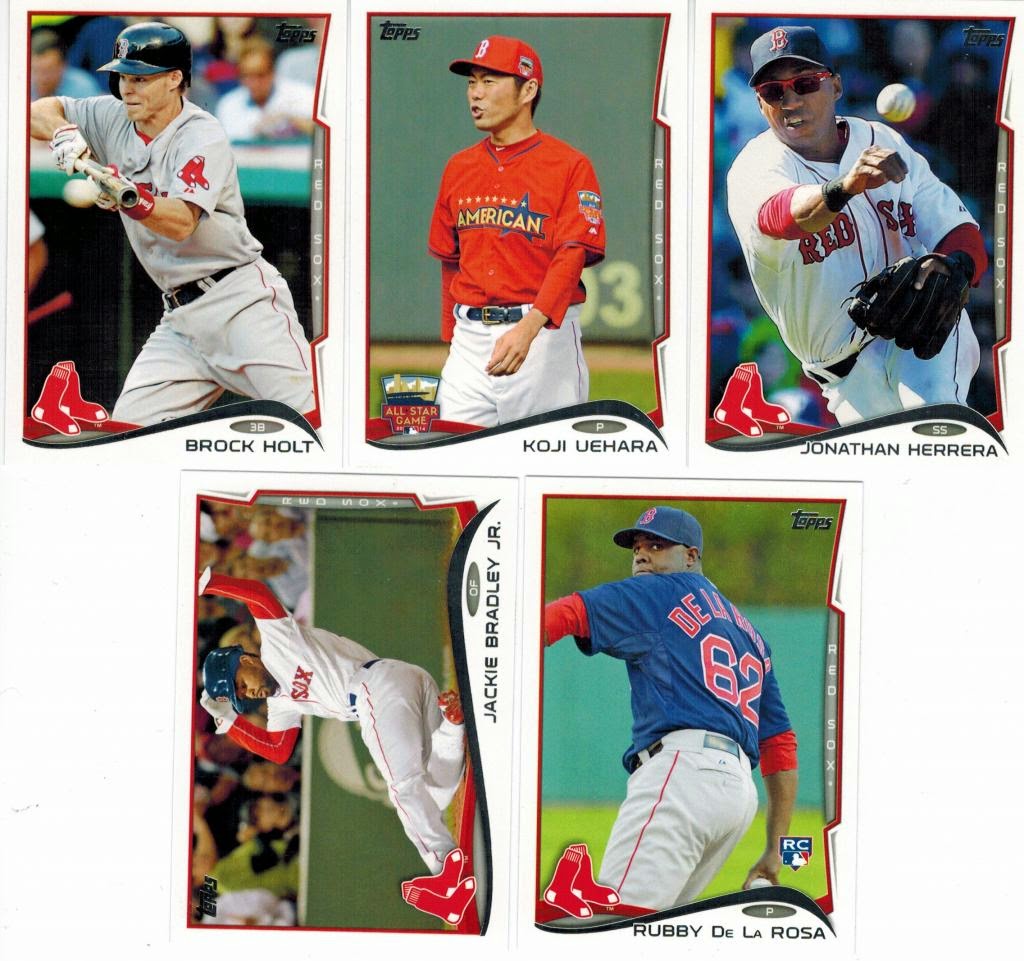 1.  Brock Holt:  Holt was one of the few bright spots for Boston this year, helping to infuse a spark into the offense when he was called up.  Here he is bunting.

2.  Koji Uehara AS.  Uehara was one of just two All Stars for Boston this season.  He struggled down the stretch but will be back next season.

3.  Jonathan Herrera.  Herrera was acquired to be the utility infielder this season in a trade with Colorado that cost Franklin Morales.  Unfortunately, he could not hit at all.

4.  Jackie Bradley Jr.  Speaking of players that couldn't hit.  Bradley is exasperating because he is SOOOO good defensively.  He has always hit in the minors so hopefully he will come around, but it is looking less and less likely that it will be for Boston.

5.  Rubby De La Rosa.  One of the big pickups in the big trade with the Dodgers, De La Rosa is looking like a potential closer candidate in the future.

Posted by Metallattorney at 10:02 PM 2 comments:

Mark Hoyle continues to surprise me by sending me random packages of stuff.  Just recently he sent me this collection of 1983 Boston Herald stamps:

3.  Luis Aponte.  I know next to nothing about Aponte other than that he was a middle reliever.

4.  Bob Ojeda.  Ojeda was one of many very good pitchers Boston developed in the 1980's.  Unfortunately two of the better ones, Ojeda and John Tudor, were traded away.

5.  Dick Radatz.  The Monster was one of the first great closers.

6.  Cy Young.  Of course, Young was one of the greatest pitchers who ever lived.

7.  Joe Cronin.  Cronin went from Hall of Fame baseball player to pennant-winning manager to general manager to American League president in his career.

10.  Dwight Evans.  I still think Dewey belongs in the Hall of Fame.

I was thrilled when Panini released the Hometown Heroes set.  It was a set similar to the Fan Favorites sets from Topps, though without the intriguing designs.  Player selection was incredibly interesting with a lot of players who had not appeared in sets for years.  But it was hard getting cards.  I picked up a few random cards here and there but there were a lot that I still needed.  Until just recently when I worked out a deal for the rest of the base cards I needed, plus one parallel. 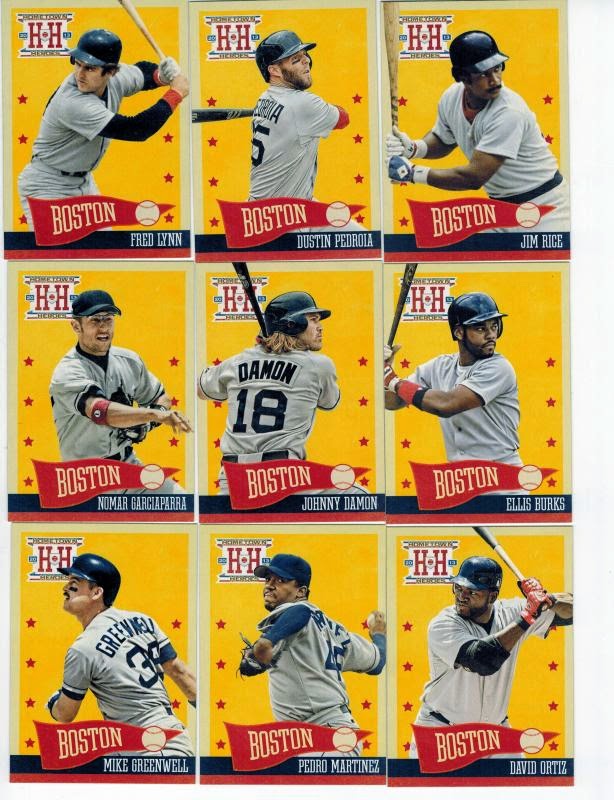 1.  2013 Panini Hometown Heroes Fred Lynn.  Lynn of course was the first player to win the Rookie of the Year and MVP the same season, which he did in 1975.  He was a terrific player for several seasons but declined after leaving the Red Sox.

2.  2013 Panini Hometown Heroes Dustin Pedroia.  Pedroia is putting together a Hall of Fame-worthy career and won the Rookie of the Year in 2007 and the MVP in 2008.

4.  2013 Panini Hometown Heroes Nomar Garciaparra.  Nomar will be eligible for the Hall of Fame for the first time this year.  He won the Rookie of the Year in 1997.

6.  2013 Panini Hometown Heroes Ellis Burks.  Burks was one of my early favorites.  He won the Gold Glove and Silver Slugger in 1990.

8.  2013 Panini Hometown Heroes Pedro Martinez.  Pedro should get elected to the Hall in January. 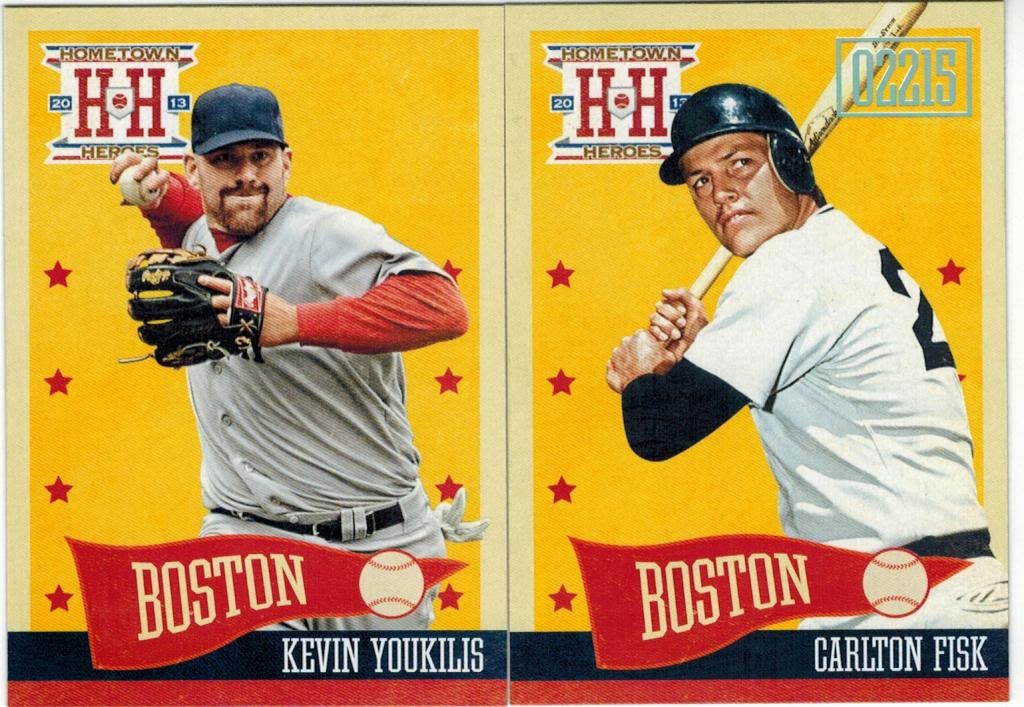 10.  2013 Panini Hometown Heroes Kevin Youkilis.  Youk was actually still active in 2013 but he was definitely a fan favorite with the Red Sox.

11.  2013 Panini Hometown Heroes Zip Code Carlton Fisk.  I still need to get the parallels for Jason Varitek.  This is my first parallel from this set.
Posted by Metallattorney at 11:43 PM No comments:

I received another package of cards from my personal favorite Yankees blogger Zippy Zappy.  He always loads up the prospects in his random packages, and this one was no different: 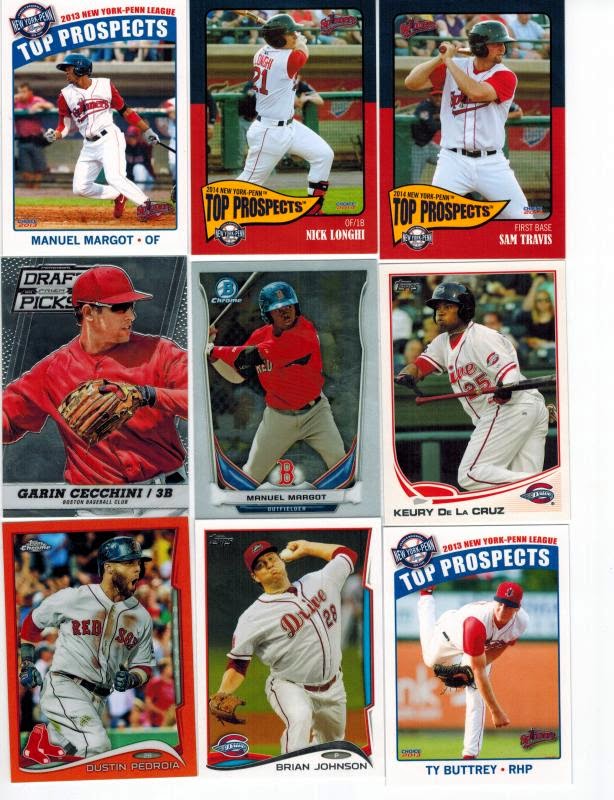 1.  2013 New York-Penn League Top Prospects Manuel Margot.  Margot had a breakout season this year at the age of 20.  He provides a lot of speed and a little pop.

2.  2014 New York-Penn League Top Prospects Nick Longhi.  Longhi is another very young work-in-progress who should show a lot of power as he matures.

3.  2014 New York-Penn League Top Prospects Sam Travis.  Travis is a bit farther along and his power has already materialized.

4.  2013 Panini Prizm Perennial Draft Pics Garin Cecchini.  Cecchini made a brief appearance in Boston this season and looks poised to make a bigger splash next season.

6.  2013 Topps Minors Keury De La Cruz.  De La Cruz had his breakout season in 2012 and followed that up with another solid season in 2014 though he has fallen a bit on the depth chart.

8.  2013 Topps Minors Brian Johnson.  Johnson has proven to be a very impressive control pitcher in the minors, possibly looking at becoming another Doug Fister.

9.  2013 New York-Penn League Ty Buttrey.  Buttrey is another high-ceiling arm in the Red Sox system and looks poised to move quickly next season.

Thanks Kenny!
Posted by Metallattorney at 11:08 PM 2 comments:

I have been pretty bad about posting lately.  I have several recent packages to catch up on, starting here: 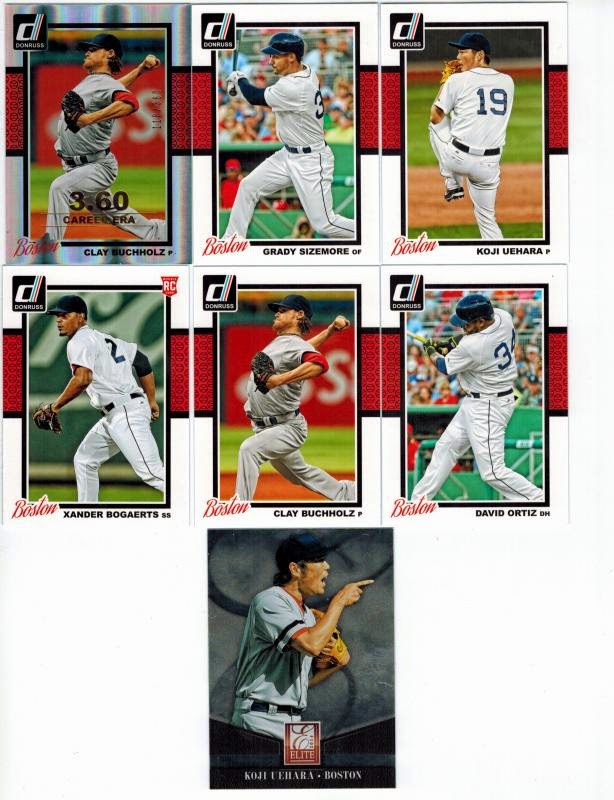 I was happy to see Donruss back this year, but it would be much better if they had an MLB license.  Anyway, here are some pickups from the second series.

1.  2014 Donruss Career Stat Line Clay Buchholz.  The Stat Line parallel set was something Donruss used in the early 2000's to serial-number cards.  Which is weird and unwieldy because each card possibly has a different print run.

2.  2014 Donruss Grady Sizemore.  This and his Topps Chrome card are likely to be his only cards with the Red Sox.  At least he had some, unlike players like Scott Podsednik, Alex Cole, Matt Stairs, and others.

3.  2014 Donruss Koji Uehara.  It was recently announced that Koji signed a two-year extension with Boston.

4.  2014 Donruss Xander Bogaerts.  Bogaerts had a rough season, but he showed some promise.  Hopefully he can fulfill that next season.

5.  2014 Donruss Clay Buchholz.  Buchholz could still be an effective member of the Red Sox rotation next season, but another year like 2014 may lead to him being shipped out.

7.  2014 Donruss Elite Koji Uehara.  I love this card, but an a little annoyed that it is the same shot as is on his Prizm card.  I hate reused photos.
Posted by Metallattorney at 11:54 PM 1 comment: