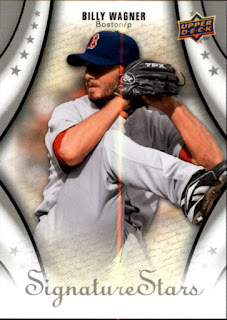 BILLY WAGNER
Billy Wagner did not even pitch a full year for the Red Sox actually. He was suffering an injury-plagued year for the Mets in 2009 when they traded him late in the season to the Red Sox for financial relief, Chris Carter, and Eddie Lora. Wagner was once one of the best closers in the game.

Wagner immediately paid dividends for the Red Sox though. Despite pitching in only 15 games, Wagner was a big pickup. He was relatively well-rested due to the injuries, so he was a big weapon out of the pen down the stretch.

Wagner went 1-1 with a 1.98 ERA and 22 strikeouts in only 13.2 innings as a lefty out of the pen. He gave up only eight hits, five earned runs, and seven walks. After the season, the Red Sox offered him arbitration, but he left for a closing opportunity with the Atlanta Braves. Boston got a first round draft pick though which was used on Kolbrin Vitek, now a top ten prospect in the Red Sox system.
Posted by Metallattorney at 1:22 PM

Email ThisBlogThis!Share to TwitterShare to FacebookShare to Pinterest
Labels: one year wonder, wagner