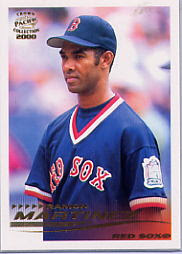 RAMON MARTINEZ
In their ongoing quest to find decent pitching to fill out the back end of the rotation, the Red Sox signed Pedro Martinez's older brother. Ramon Martinez was a great pitcher early in his career with the L.A. Dodgers and even won 20 games in 1990. Of course he pitched a lot of innings early in his career, so he began to pay for that as the decade wore on.

Martinez was signed to an inexpensive deal in 1999 and made four starts for the Red Sox, winning two games with a 3.05 ERA and 15 strikeouts in 20.2 innings. He looked like a pretty good bet to pitch well the next year, but he tanked.

Martinez went to Pittsburgh the next year but he was basically washed up. His brother continued to shine for several more years though.
Posted by Metallattorney at 8:56 PM