I bought a couple of $10.00 hanger packs the other day from Wal Mart.  Bowman and Gypsy Queen still contain quite a few cards that I have not gotten for my Red Sox collection.  Unfortunately I did not make much of a dent here:

Of the three of these, the Devers card is the most interesting.  Devers is one of Boston's top prospects and has a ton of power for a minor leaguer.  The other two cards are just base cards of Napoli and Ortiz.  So there is still a long ways to go to get the team sets for these two sets.  In addition, I do not have any inserts or parallels from the sets.
Posted by Metallattorney at 11:08 PM No comments:

Mark Hoyle came through yet again and sent me the 2015 Topps Factory Team Set recently.  The set included 17 cards, many of which were of players that have yet to appear in a lot of sets for the Red Sox.  Here they are: 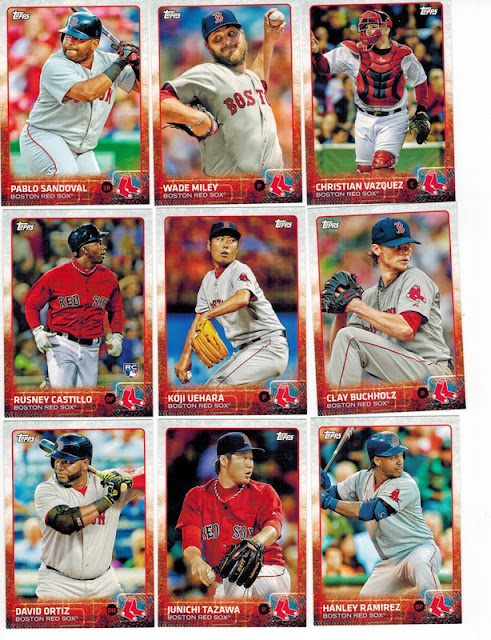 1.  Pablo Sandoval.  Sandoval was the acquisition I was most excited about.  He has had a nice season so far.

2.  Wade Miley.  After a few really rough starts, Miley has seemingly turned a corner.  What I like best about him is how fast he pitches, unlike Clay Buchholz who can be maddening.

3.  Christian Vazquez.  Unfortunately Vazquez is out for the season.  Blake Swihart has stepped in and has played okay, but his hitting has yet to come around.

4.  Rusney Castillo.  He was just called up over the weekend, and will likely be sticking around.

5.  Koji Uehara.  Koji has been Koji this year so far, which is great.

6.  Clay Buchholz.  After a terrific first game, Buchholz has been wildly inconsistent.

7.  David Ortiz.  The home runs are there so far this year, but his average is way down.

8.  Junichi Tazawa.  Tazawa does not appear in a lot of sets, so it is great to see him show up in this.  Hopefully he will also be in the regular set.  He has been showing up in some higher-end sets recently with autographs.

9.  Hanley Ramirez.  Ramirez has been the team leader in home runs this year.  He was doing great until he had a little bit of an injury.  Hopefully he will get back to knocking balls out of the park soon. 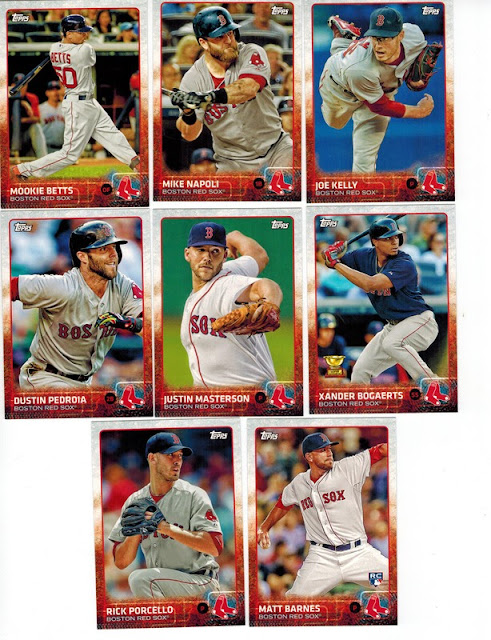 10.  Mookie Betts.  Betts has been kind of inconsistent this year as well.  He has hit for some power and stolen some bases, but the batting average is not there.

11.  Mike Napoli.  After a slow start, Napoli has exploded recently, hitting four home runs over the weekend against the Angels, the team that never really gave him a chance.

12.  Joe Kelly.  Kelly seems to let a rough inning completely ruin each game he pitches.  He has been a little frustrating.

13.  Dustin Pedroia.  Pedroia has been having a fairly typical season for him, with quite a bit more power.

15.  Xander Bogaerts.  His hitting has come around and he is starting to look like the star he was supposed to be.

16.  Rick Porcello.  Porcello has been the best starter for the Red Sox so far this year, but that is not really saying all that much.

17.  Matt Barnes.  Other than a rough night Friday, Barnes has been pretty decent out of the pen.  I am not sure if his future is in the bullpen or the starting rotation, but it has been good to see the Red Sox develop a decent pitcher again.

Thanks for the set Mark!

Posted by Metallattorney at 12:52 PM 3 comments:

Waiting 'Til Next Year

With the way Boston has been playing lately, that probably could stand for an indictment on their chances this season.  But no, this is actually a trade post.  Tom from Waiting 'til Next Year contacted me about setting up a trade.  It has been a little bit since I have gotten a trade worked out, so I quickly agreed.  A few days later, a large brick of cards descended upon my mailbox and some nice stuff came out of the brick. 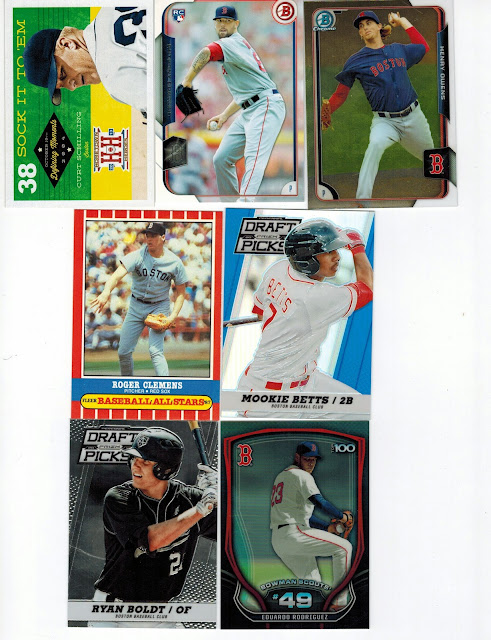 1.  2013 Panini Hometown Heroes Defining Moments Curt Schilling.  I loved Hometown Heroes.  I wish Panini would have done it again, but I guess it is hard to do a team-centric set without an MLB License.  This is one of the inserts I still needed, and of course this card is referring to the "bloody sock" games in the 2004 postseason.

3.  2015 Bowman Chrome Prospects Henry Owens.  Owens is Boston's top pitching prospect.  Hopefully he can step in at some point and stop some of the bleeding the pitching staff is experiencing.

4.  1987 Fleer Baseball's All Stars Roger Clemens.  One of the Fleer box set cards I still needed.  I had most of the cards from this set, the Clemens was the last I needed.

5.  2013 Panini Prizm Draft Picks Blue Mookie Betts.  Easily my favorite card from this package, this is a low-numbered card of one of my favorite current players.  Betts is struggling a little bit but is starting to show some signs of getting back on track.

6.  2013 Panini Prizm Draft Picks Ryan Boldt.  This card baffles me.  Boldt did not sign with Boston after being drafted.  He is in fact one of the best players on the Nebraska Cornhusker baseball team of which I am very familiar.  So it was very surprising to see this card.

Thanks Tom.  I will get your package out next week some time.
Posted by Metallattorney at 11:05 PM 2 comments:

Small Trade and Some New Bowman

It's been rather frustrating watching the Red Sox lately.  So I have not been really excited about adding cards of late.  Saturday I received a trade package in the mail as well as a couple of cards in some Bowman packs.  Here they are: 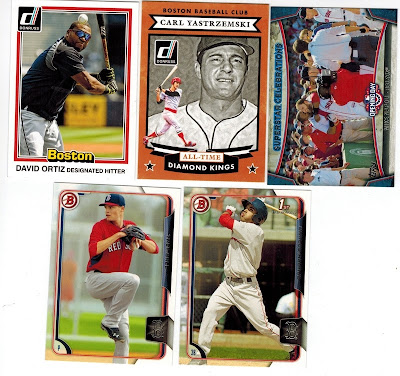 1.  2015 Donruss 1981 David Ortiz.  This is a nice way of getting around the lack of an MLB license.  The card actually looks pretty damn good.

2.  2015 Donruss All Time Diamond Kings Carl Yastrzemski.  Yaz had a Diamond King card in 1983 while he was still an active player.

3.  2015 Topps Opening Day Superstar Celebrations Mike Napoli.  I always like these inserts.  Not sure Napoli qualifies as a superstar, but whatever.

4.  2015 Bowman Prospects Trey Ball.  Ball has been a little slow to get going in his professional career, but he is young yet.  With the rate Bowman is releasing cards of him though, I will probably have about 50 before he makes the Majors.

5.  2015 Bowman Prospects Carlos Asuaje.  With the emergence of Brock Holt as a super-utility player, Boston has been seeking more versatile players.  Asuaje fits the bill.

So that's it for the weekend pickups.  Got plenty of Bowman to trade for Red Sox cards.
Posted by Metallattorney at 8:19 PM 1 comment: