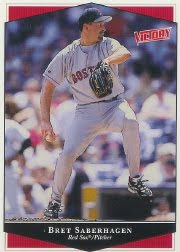 BRET SABERHAGEN
If only Bret Saberhagen had stayed healthy. Saberhagen was one of the best pitchers in the game in the mid to late 1980's. He won the Cy Young Award in both 1985 and 1989, winning 20 games each year.

Saberhagen was still a good pitcher in the early 1990's and may have deserved to win the NL Cy Young Award in 1994. But the injuries took their toll and Saberhagen missed large portions of the seasons 1990 through 1993. Even after 1994, Saberhagen still had issues. He only pitched in 25 games in 1995 and was out the entire year in 1996.

The Red Sox signed Bret Saberhagen to a low-cost, high-reward contract prior to the 1997 season. Saberhagen was still suffering through injuries in 1997 and only pitched in six games that year. But in 1998, Saberhagen made a great comeback, winning 15 games with a 3.96 ERA and 100 strikeouts in 175 innings. The next year, his ERA was 2.95, but he won only 10 games, as he again suffered injuries. He missed all of 2000 and then only pitched in three games in 2001.

Saberhagen's career record was 167-117 with a 3.34 ERA and 1,715 strikeouts. His career WAR was 54.4. Certainly, Saberhagen had some great years, and his career WAR was higher than Hall of Famers Dazzy Vance, Stan Coveleski, Rube Waddell, Waite Hoyt, and Dizzy Dean.

Email ThisBlogThis!Share to TwitterShare to FacebookShare to Pinterest
Labels: hall of fame, saberhagen