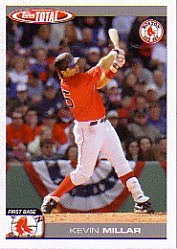 I was so excited about the acquisition of Kevin Millar in 2003 that I even wrote a term paper for my Conflicts Resolution class about the negotiation process. For those that do not know or remember, the Florida Marlins sold Millar's contract to the Chunichi Dragons in Japan. In order to send him to Japan though, they had to pass him through waivers. It was an unspoken rule that Major League teams would not interfere in other teams' deals with Japan, but new Red Sox GM Theo Epstein claimed Millar anyway.

Millar spent three years with the Red Sox and brought a new attitude and levity to the Red Sox clubhouse that had not been seen in years. Millar was instrumental in the "Cowboy Up" slogan in 2003 and the "Idiots" in 2004.

Millar was part of the group of acquisitions designed to focus on improving the team's on-base percentage, something he was successful at. Millar also provided leadership and somewhat steady defense.

Millar was a lot of fun and was one of the more colorful characters in recent Red Sox history. Not many players could pull off throwing out the first pitch in a World Series game while still being active with a rival team, but Millar did it in 2007.
Posted by Metallattorney at 3:46 PM