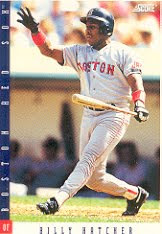 Billy Hatcher was a World Series hero with the Cincinnati Reds in 1990. He was picked up in a trade by the Red Sox during the 1992 season for pitcher Tom Bolton. Hatcher immediately brought some value to the team by being one of the few players with any sort of speed. Hatcher even pulled off a straight steal of home early on in his Red Sox tenure.

Sorry about the lateness of this post. The Red Sox added another arm recently by picking up the former Yankee right-hander. The Red Sox apparently want to convert Aceves to a starter. Aceves has had success at the Major League level for the Yankees, but it was in the bullpen. An interesting, low-risk, high-reward type signing.
Posted by Metallattorney at 6:34 PM No comments:

Sorry for the hiatus. I just finished moving.

Anyway, the Red Sox signed Dennys Reyes, a large left-hander, to a minor league deal with an invitation to Spring Training. Reyes is 34 and pitched for St. Louis last year, going 3-1 with a 3.55 ERA and 25 strikeouts in 38 innings. He is just another left-handed relief option the Red Sox are bringing in searching for a good LOOGY.
Posted by Metallattorney at 9:21 AM No comments: