Don't Forget About My Other Blog

My single player collection is still going strong.  If anyone has any Sandy Alomar Jr. cards, send 'em this way.

Fired Up About Pedroia

One card today from a one-for-one trade. 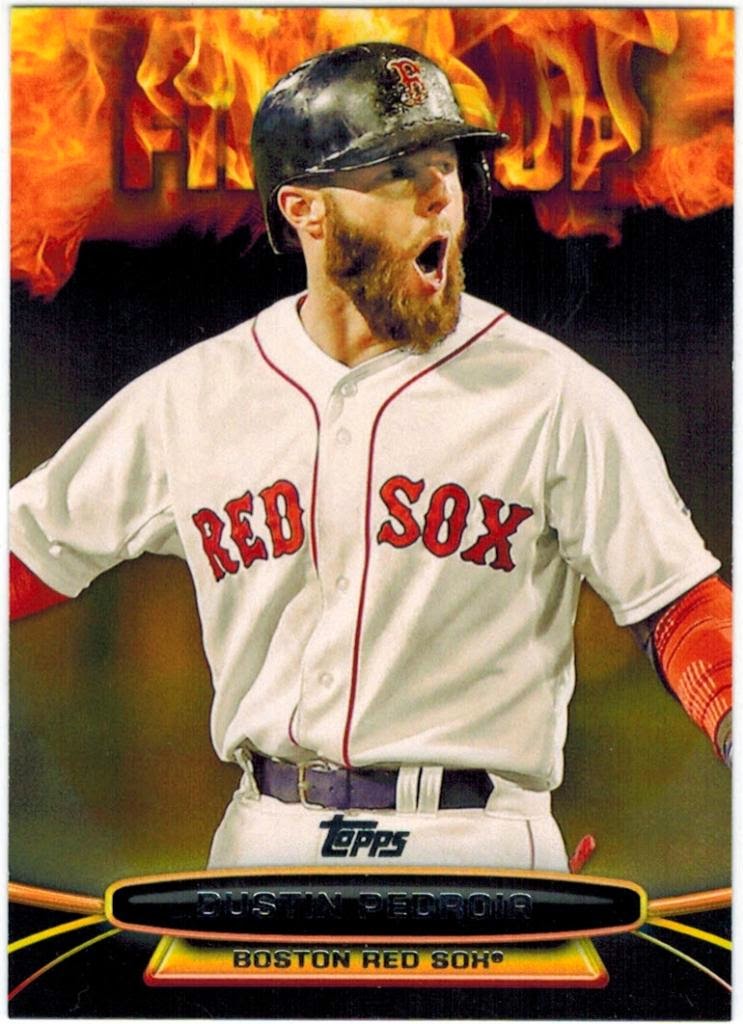 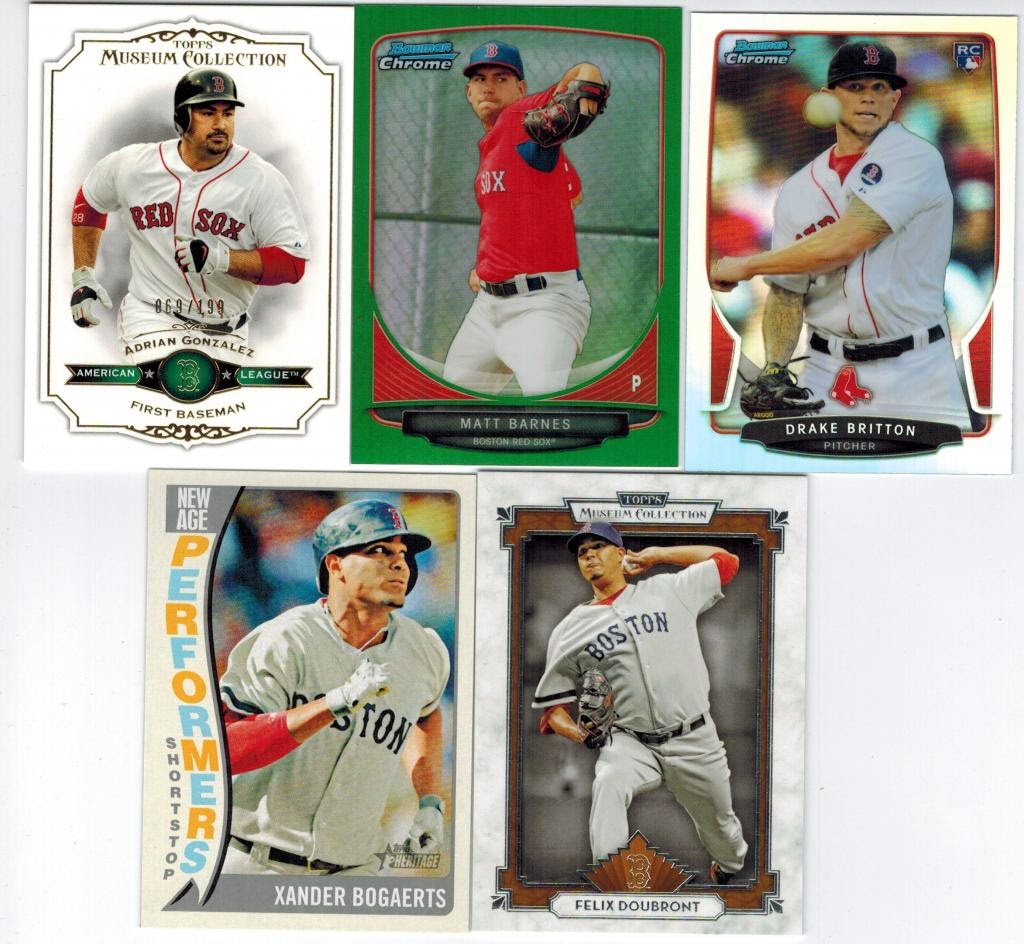 5.  2014 Topps Museum Collection Copper Felix Doubront.  His inconsistency has become a little maddening.  Last night was horrible.  But he will probably be great next time out.
Posted by Metallattorney at 3:10 PM No comments:

I'm having a rough year baseball-wise.  The Red Sox have been mediocre, my fantasy team is off to a crappy start, and I've generally been doing rather poorly with pulling Red Sox from packs.  It has also been strangely difficult to complete my team sets.  I still have a number of Topps and Heritage needs.  Now add Gypsy Queen to the list.  I bought a blaster and it resulted in just two cards: 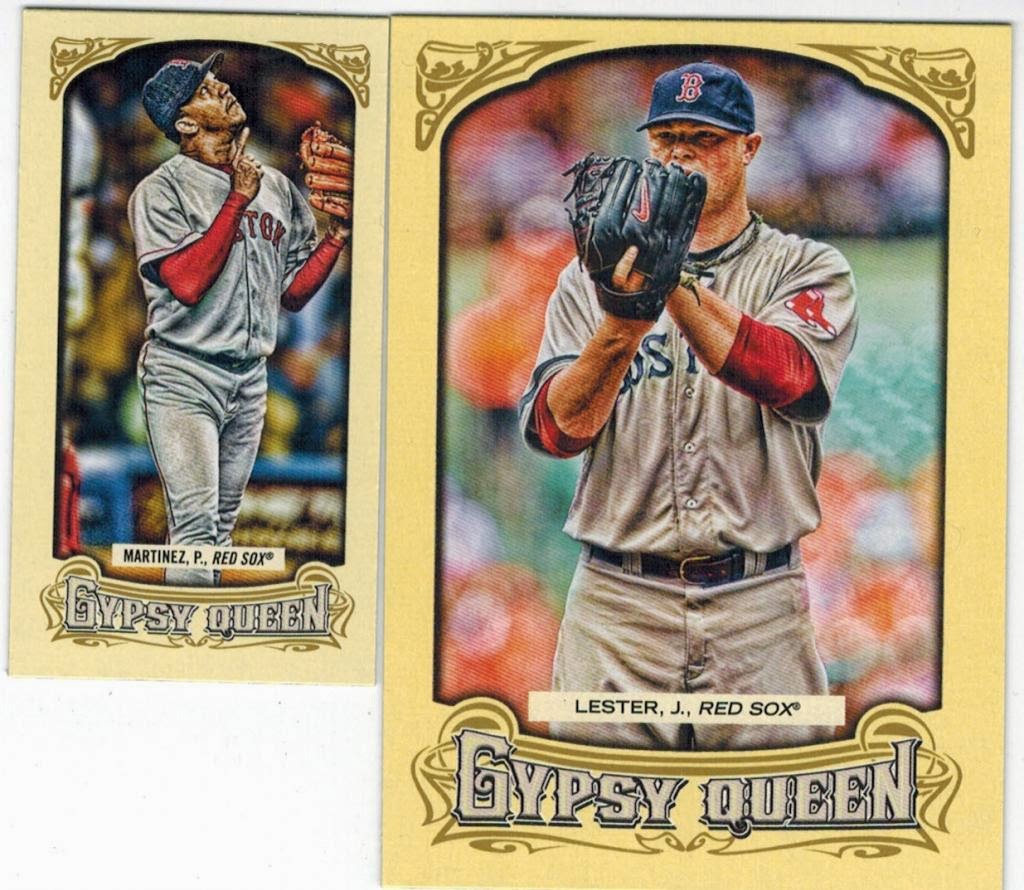 1.  2014 Topps Gypsy Queen Mini Pedro Martinez.  He will be eligible for the Hall next year.  He should get in.

2.  2014 Topps Gypsy Queen Jon Lester.  Horrible night last night against the Yankees.  They need to pull it together.
Posted by Metallattorney at 11:44 AM No comments:

A two-card mailday of cards that came in with Alomar packages: 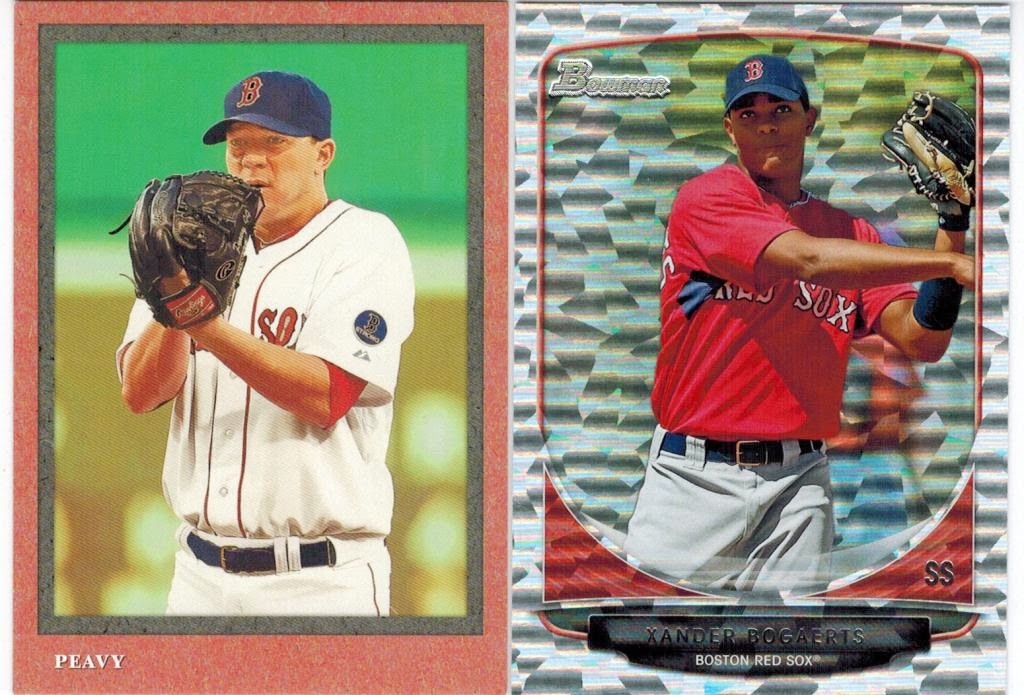 2.  2013 Bowman Draft Top Prospects Silver Ice Xander Bogaerts.  He is hitting this year a little, but has yet to show off his true potential.  I am sure he will in time.
Posted by Metallattorney at 4:15 PM No comments:

A Couple of Rockets

I traded an Astros Roger Clemens insert for two oddball Rockets with the Red Sox: 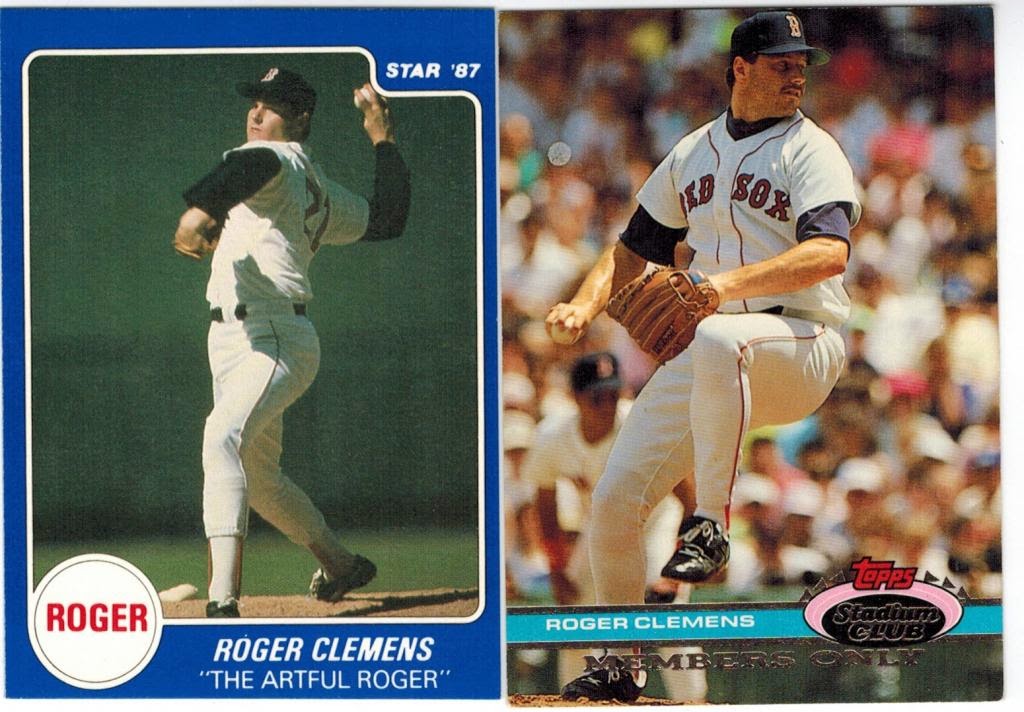 1.  1987 Star Promo Roger Clemens.  It's blank on the back.  I have one similar to this in my Alomar collection.  The title is "The Artful Roger".

2.  1991 Stadium Club Charter Member Roger Clemens.  I am not sure how I missed out on this card for so many years.  I had the Ellis Burks and Jeff Reardon from the same set, and a Sandy Alomar Jr. as well.  I had no idea there was a Clemens.

Posted by Metallattorney at 9:01 PM No comments: 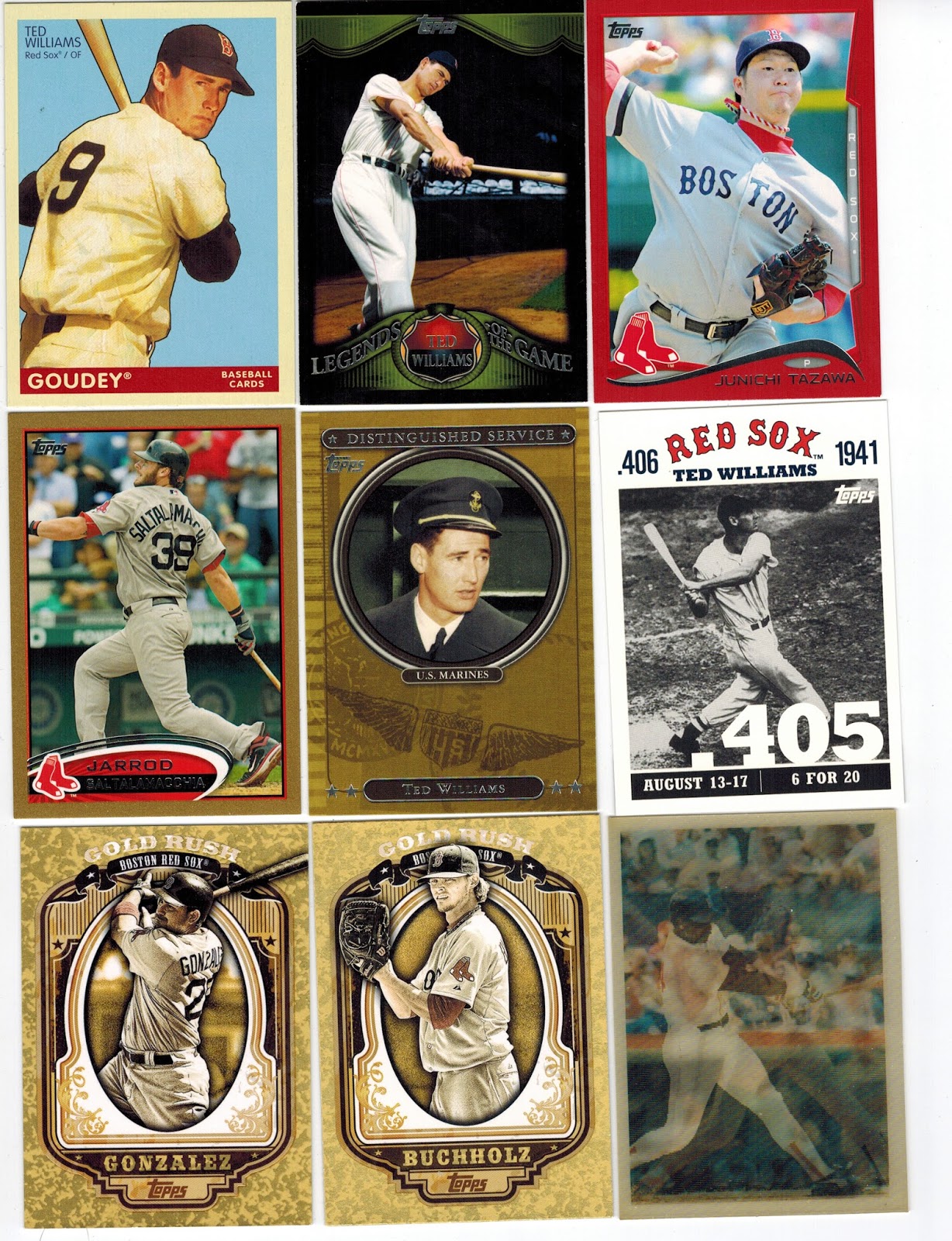 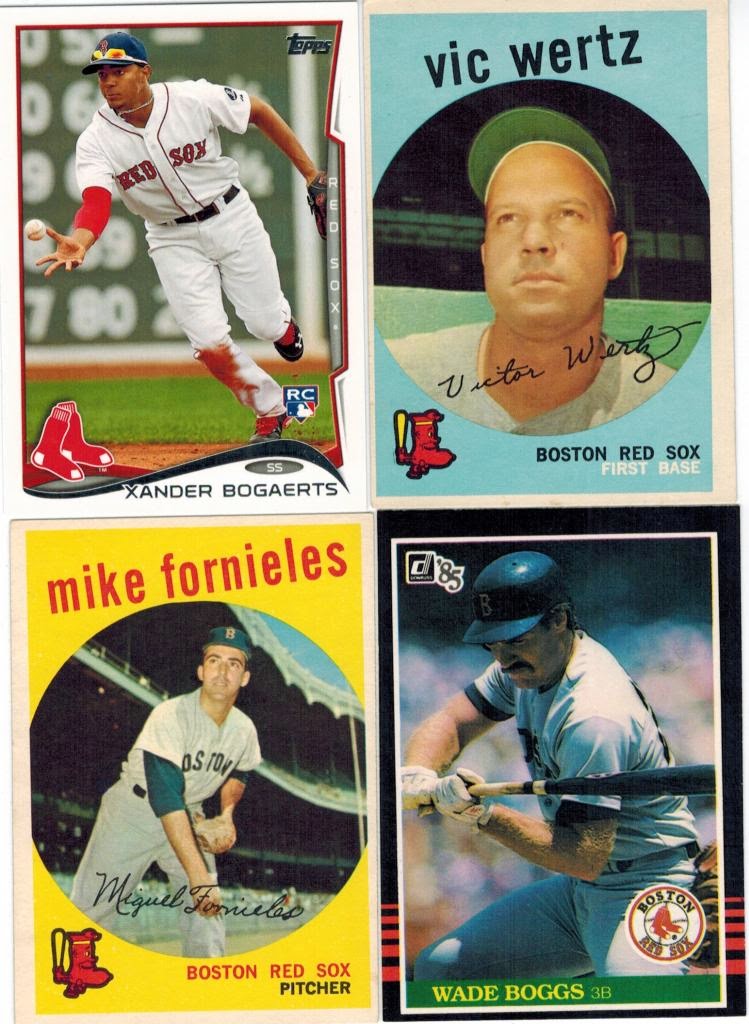 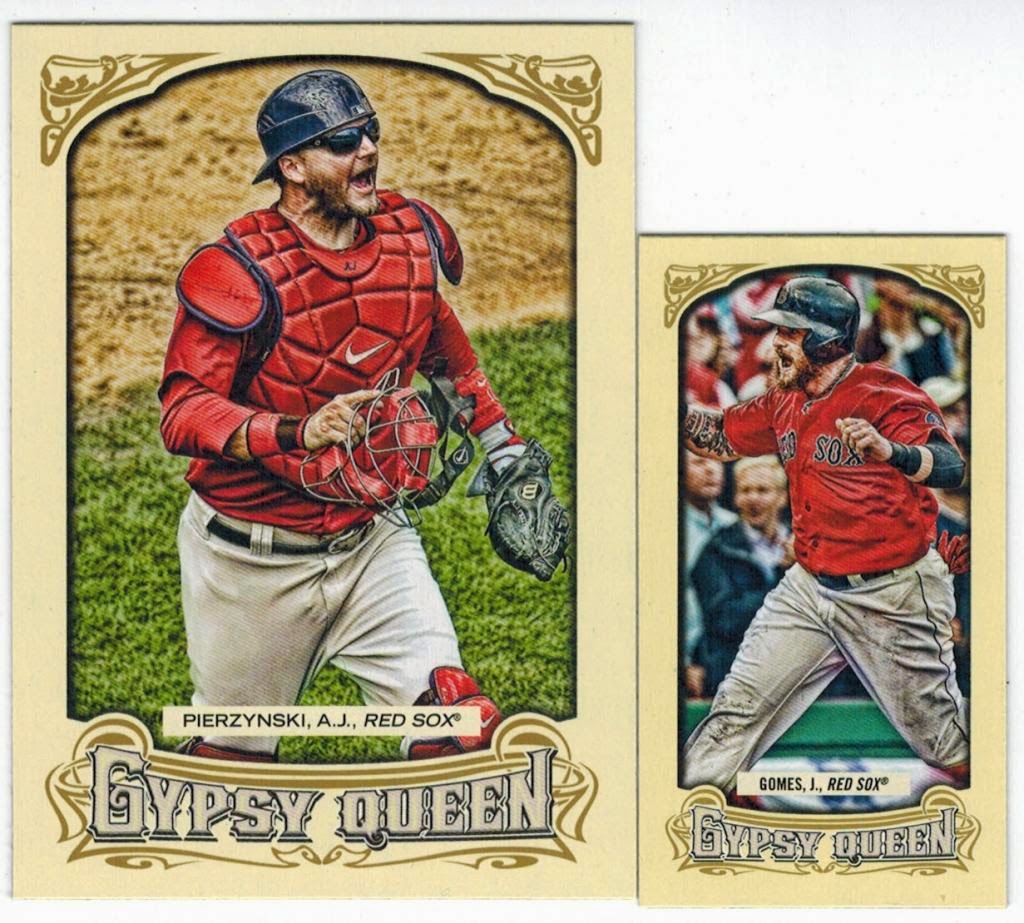 Some Hits from the Wantlist

I have not been doing too well with knocking stuff off of my wantlist lately.  Coupled with the fact that I have added a bunch of cards from recent releases to the wantlist means that it is actually growing rather than shrinking.  Not the way I prefer things to go.  So I picked up a few things with a couple of trades and a couple of buys off of Ebay. 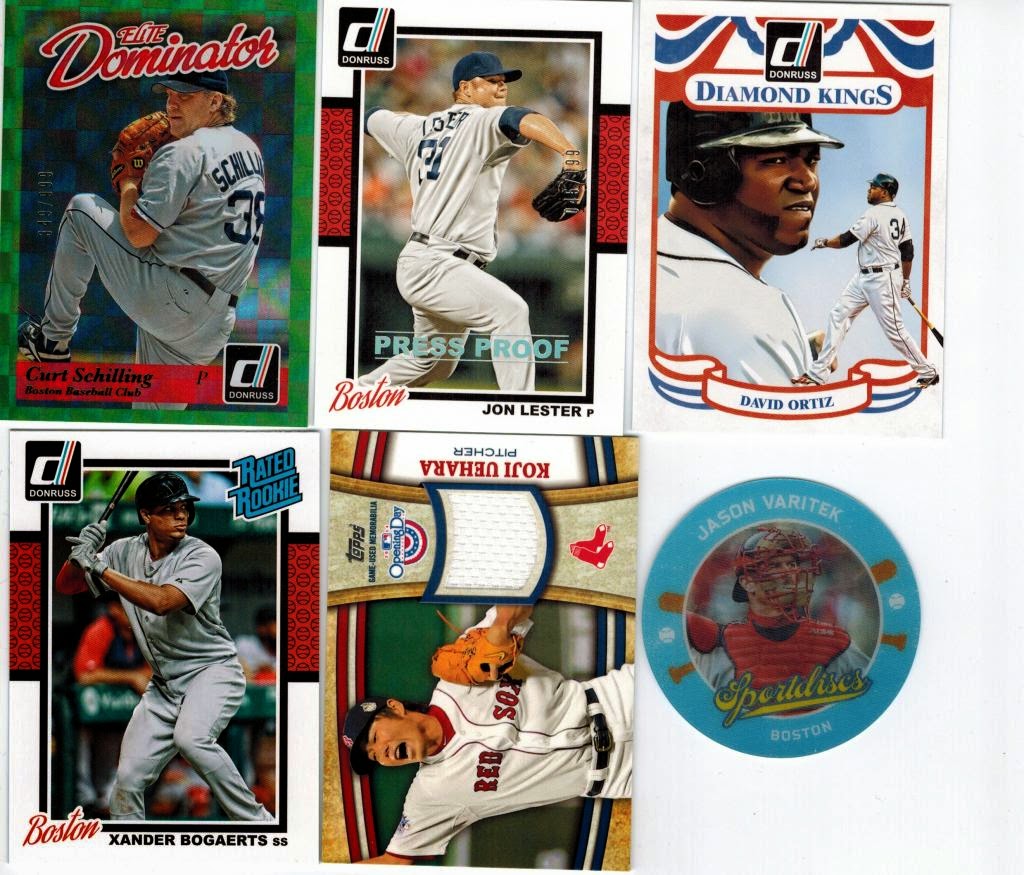 1.  2014 Donruss Elite Dominator Curt Schilling.  Excellent looking card that actually manages to hide the lack of MLB license rather well.  Schilling should be in the Hall of Fame.

3.  2014 Donruss David Ortiz DK.  Diamond Kings are back!  I just wish they were still illustrated by Dick Perez.

5.  2014 Topps Opening Day Game Used Material Koji Uehara.  I saw this and I had to have it.  Koji was such a terrific player last season.  I love the celebration shot.

6.  2013 Panini Hometown Heroes Sportdiscs Jason Varitek.  Nice disc card that calls to mind some of the Sportflics and disc cards from the early 1990's.  Plus it's my favorite player. 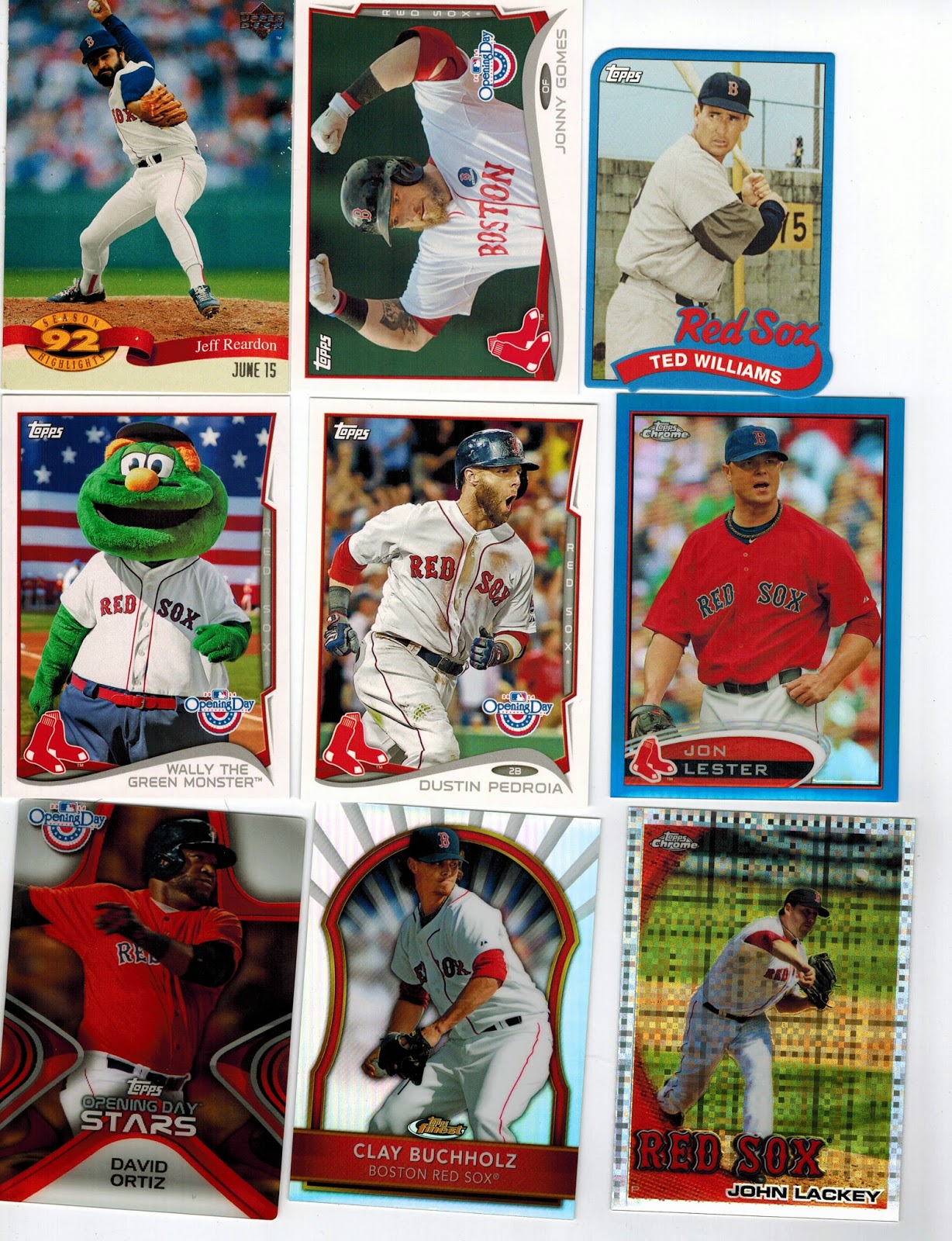 7.  1993 Upper Deck Season Highlights Jeff Reardon.  I have always liked closers.  Reardon was the first Red Sox closer I was aware of when I started watching baseball.  I remember him breaking Rollie Fingers's saves record in 1992.  He was traded not long after that and Lee Smith pretty much immediately broke his record.

8.  2014 Topps Opening Day Jonny Gomes.  I love this shot.  Gomes may be out of a job soon though with the emergence of Jackie Bradley Jr., the impressive hitting of Grady Sizemore, and Shane Victorino's return from the DL.

10.  2014 Topps Opening Day Mascots Wally the Green Monster.  I am not a big fan of mascot cards and do not go out of my way to get them.  If I get them in a trade or pack, that is fine.

11.  2014 Topps Opening Day Dustin Pedroia.  Must have been an exciting play.

Finally, I picked up another blaster of Heritage, trying to pick up the last several Red Sox I needed.  Not much got accomplished.  If anyone has any Red Sox heritage they want to get rid of, let me know.

17.  2014 Topps Heritage Will Middlebrooks/Allen Craig WS.  Not the World Series card I wanted the most.  Not even sure you can really call it a Red Sox card, but Middlebrooks is just as important in the shot as Craig, so I will give it a pass.

Lots of Stuff to Show Off With Lots of Blogger Contributions

I have gotten a lot of stuff the last few days but have been too busy to show anything off.  Well here we go: 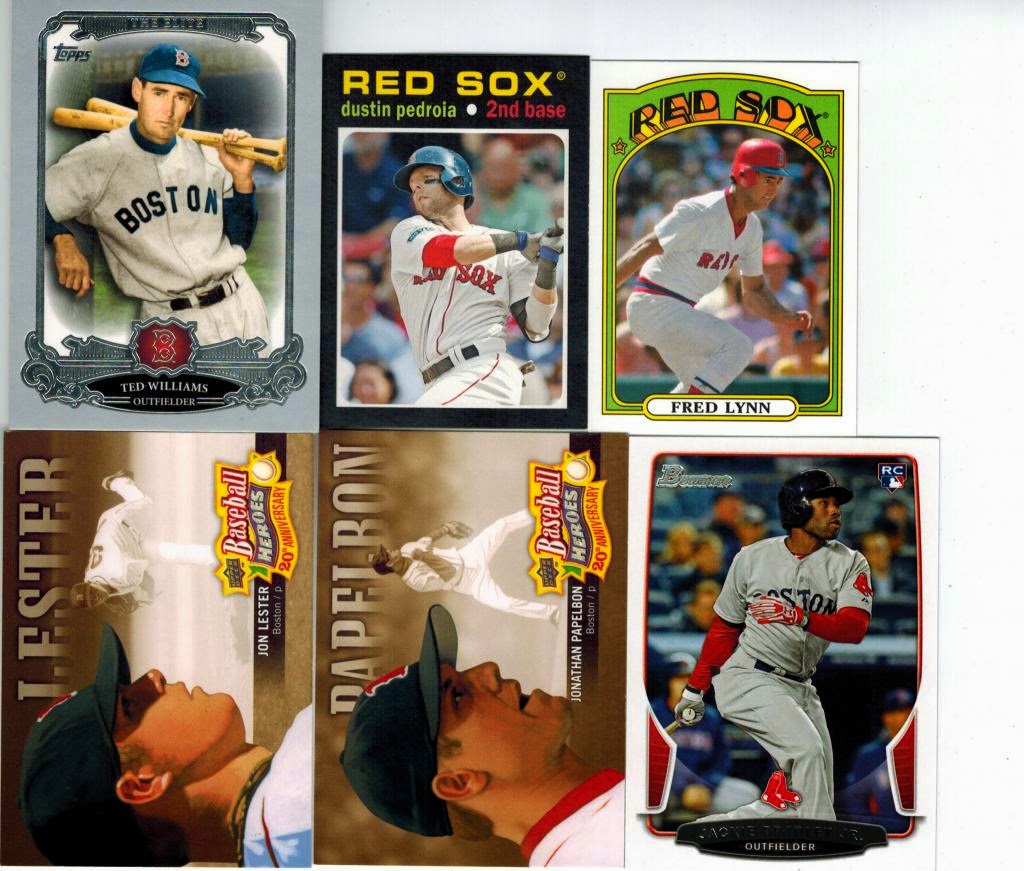 Up first is a package from Weston of Fantastic Catch in exchange for some Cardinals.
1.  2013 Topps The Elite Ted Williams.  Nice thick card of the Splendid Splinter.

Next is a big trade with Johnny from Cards from the Quarry, a big Rockies fan. 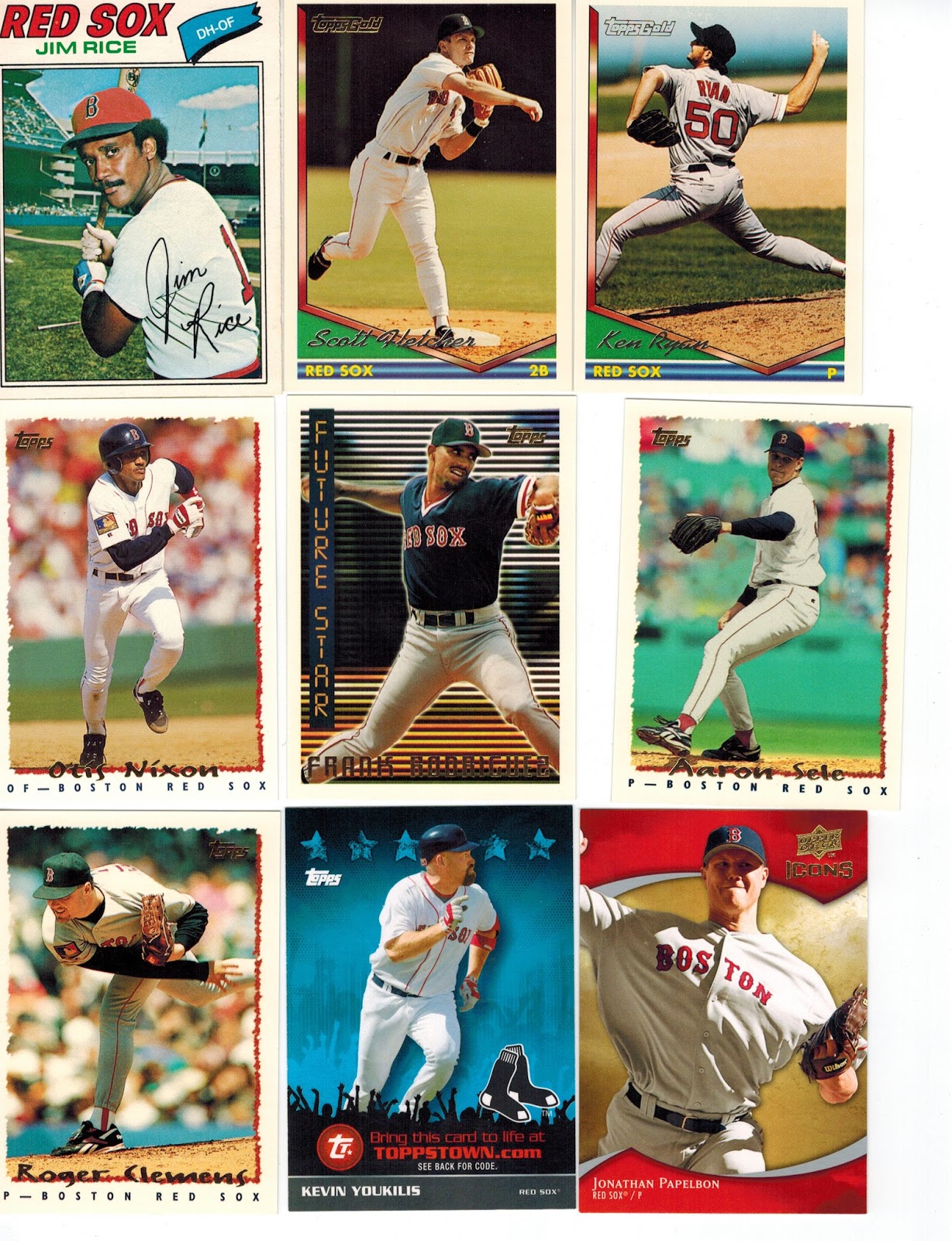 And the first card in this scan is from Johnny too: 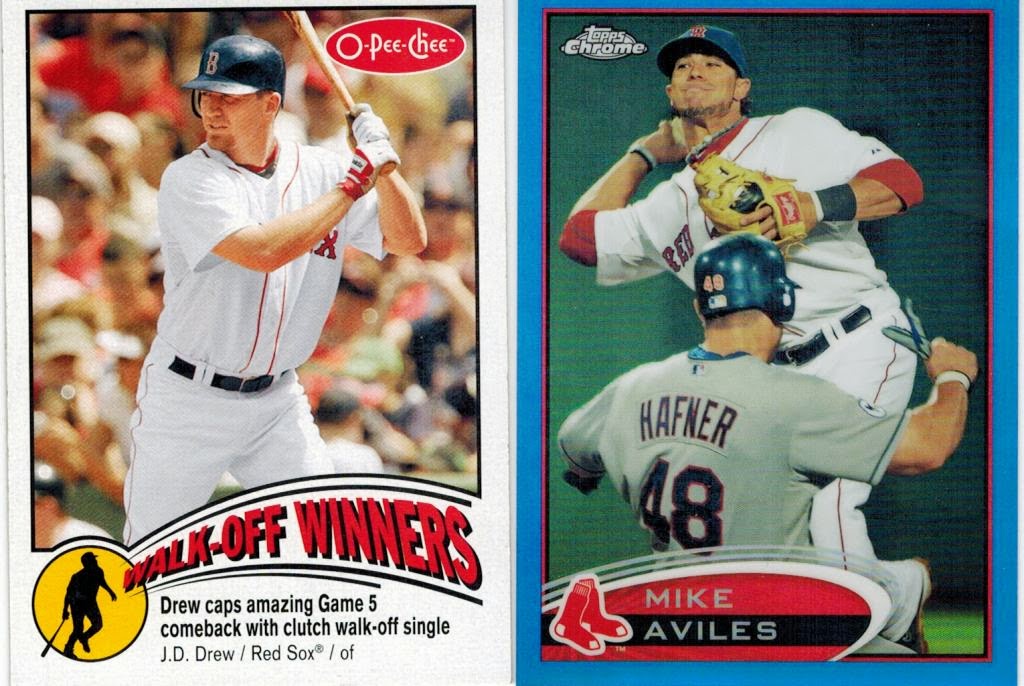 17.  2012 Topps Chrome Blue Refractor Mike Aviles.  Acquired in a trade with some Alomar stuff from the other blog.

Up next is a new vintage package from one of my favorite trading partners, Mark Hoyle: 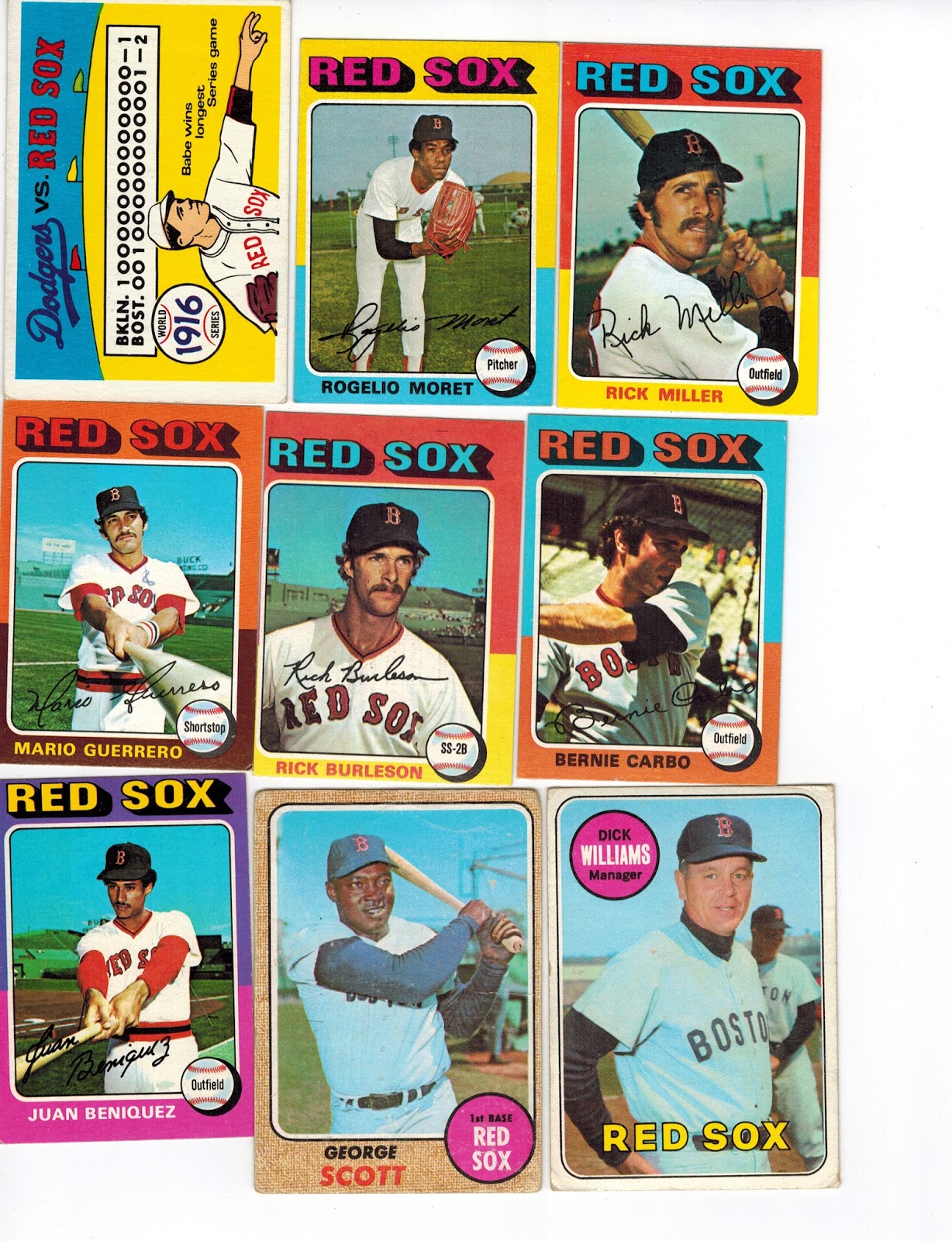 18.  1970 Fleer Laughlin World Series Babe Ruth.  Most of these cards did not feature any recognizable players, but boy this one did.  Just an awesome card celebrating Ruth's pitching dominance in the World Series.

19.  1975 Topps Mini Rogelio Moret.  Mark always throws a bunch of these in.  Not that I mind, I did not have any prior to his packages.

21.  1975 Topps Mini Mario Guerrero.  One of the pieces Boston acquired in the ill-fated Sparky Lyle trade. 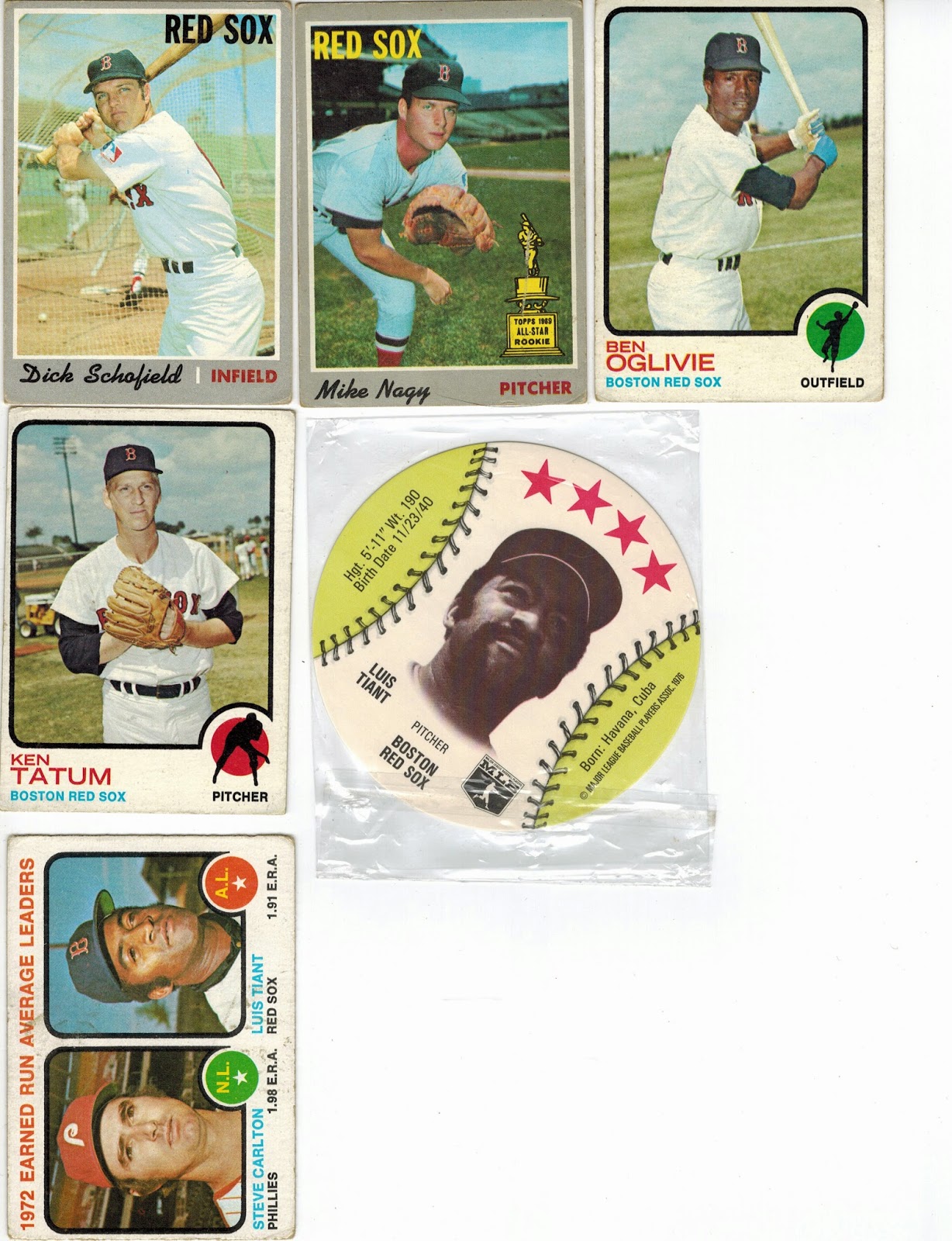 29.  1973 Topps Ben Oglivie.  Yes, another young player Boston let get away before he became a star,

Thanks Mark!  I will send some stuff asap.

Next is another trade from Kenny, aka Zippy Zappy: 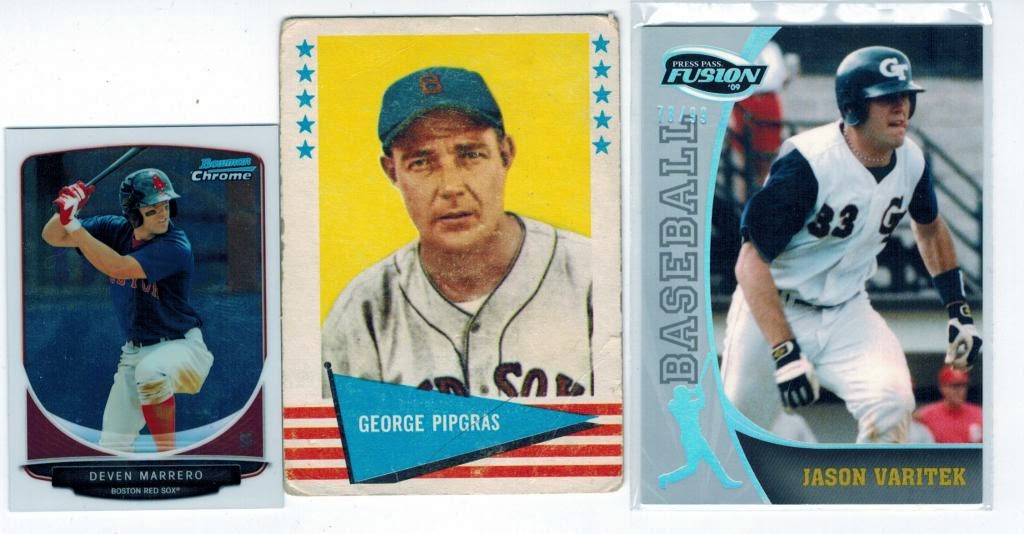 35.  2009 Fusion Press Pass Jason Varitek.  Probably not going in the Red Sox collection, but a great card of one of my favorites all the same.

Next is an Ebay win for a couple of buybacks: 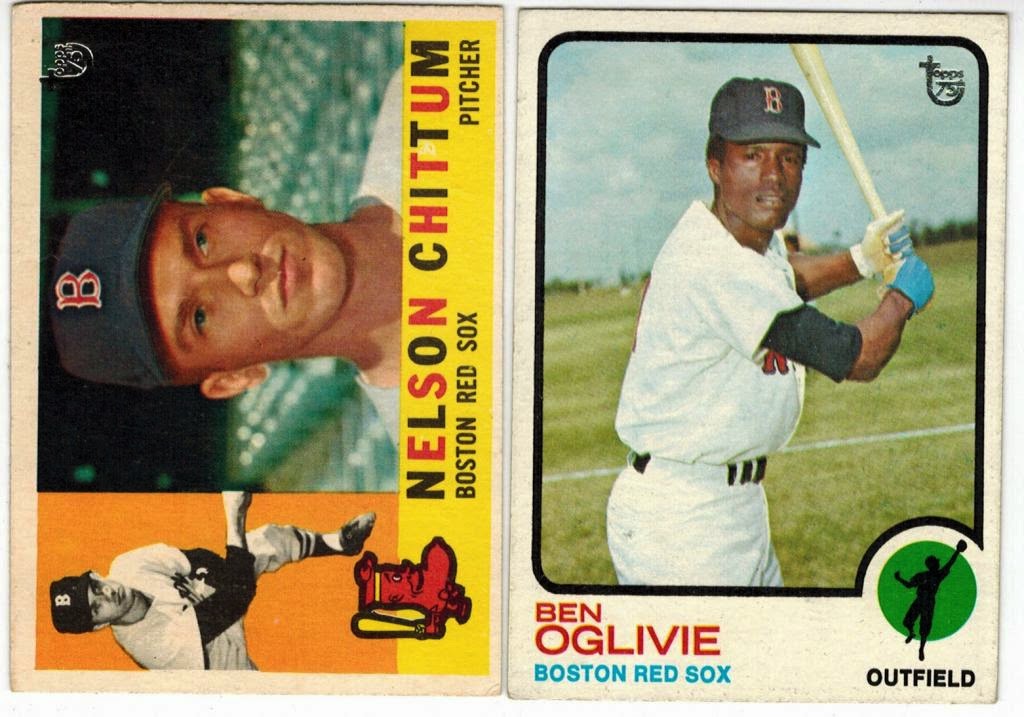 Next is some stuff Jack from Baseball Dad sent along with a bunch of Alomars you can see on the other blog. 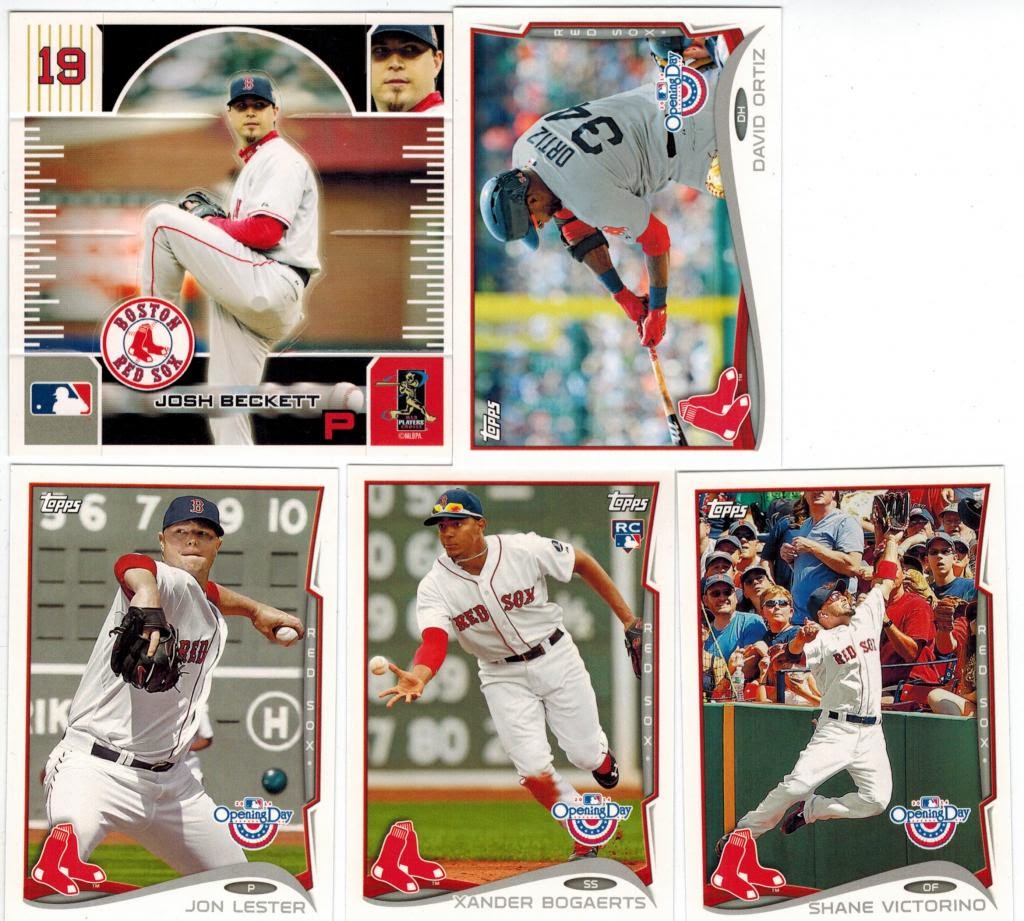 Thanks Jack!  I will send stuff soon. 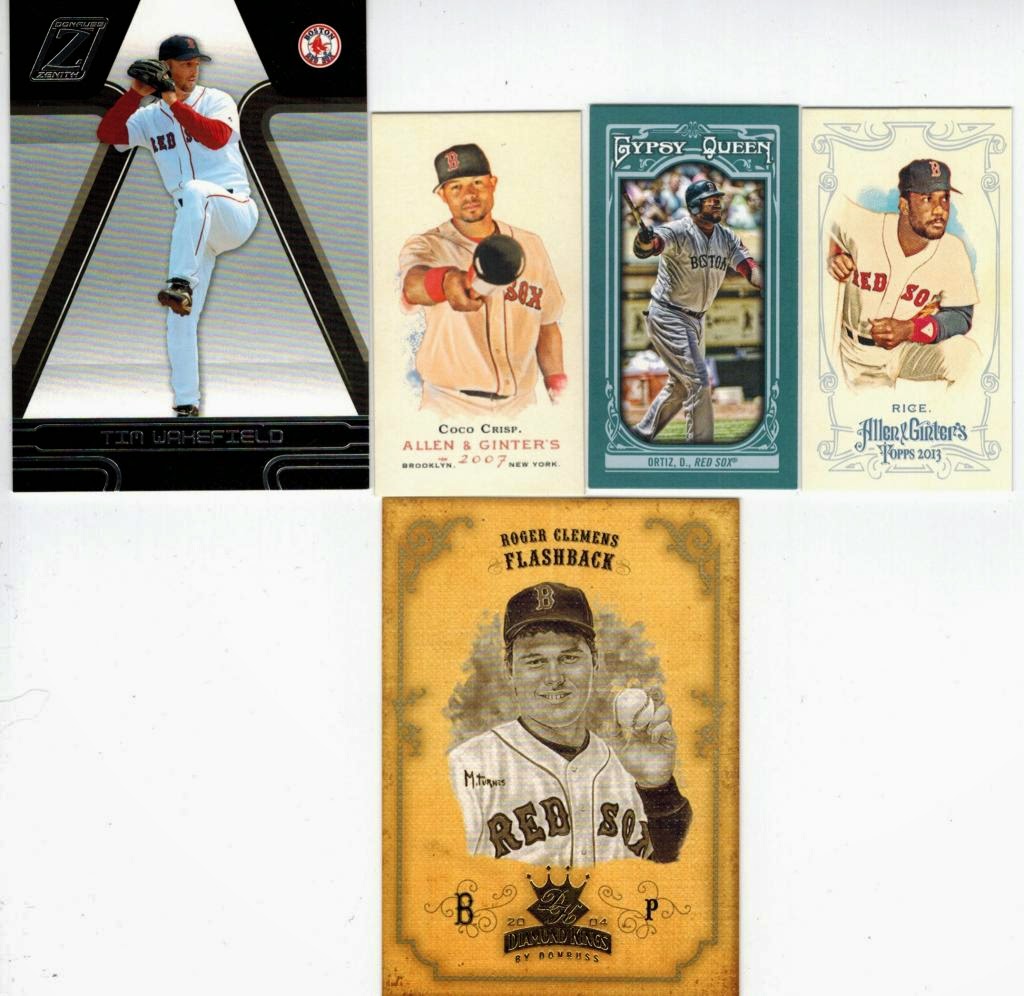