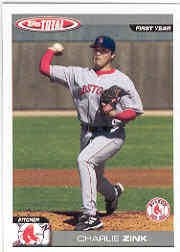 CHARLIE ZINK
Another prospect that I was disappointed never turned out. Zink was a knuckleballer who threw a decent fastball and what was called a hard knuckleball. Zink pitched reasonably well in the minor leagues, with a decent record some years, but higher ERAs. Being a knuckleballer though, not much was expected. Nevertheless, Zink has, to date, only pitched in one Major League game.

Zink was brought up to start a game in 2008. He pitched 4.1 innings, giving up eight runs. He had one strikeout and one walk. That has been the extent of Zink's career thus far, but he is still in the minors, most recently in Minnesota's system.

Knuckleballers have a long shelf life, so there is still a chance Zink could make it to the Majors, but I am surprised, at 30 years old, that he is not discouraged and has decided to retire yet.
Posted by Metallattorney at 4:17 PM