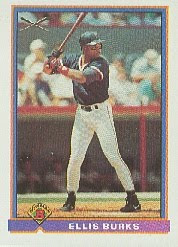 ELLIS BURKS
Ellis Burks was one of my early favorite players due to his blend of power, speed, and defense. Burks won the Silver Slugger and Gold Glove awards in 1990, the year before I started paying attention to baseball. Burks turned in a 20/20 season in his first season in the Majors, 1987. He was not able to replicate that feat in his time in Boston, but he continued to put up decent numbers. Unfortunately, he slumped horribly in 1991 and then suffered through nagging injuries in 1992, so he was allowed to leave as a free agent after the season.

Burks had a decent season in 1993 with the White Sox and then completely resurrected his career in 1994 with the Colorado Rockies. In 1996, Burks had a 30/30 season with the Rockies and lead the league in runs and slugging percentage, finishing third in the MVP race. Inevitably, the question arose whether Burks was enjoying this career resurgence was the result of the park effects from playing in Colorado.

In 1998, Burks was traded at midseason to the Giants. The question was answered as Burks continued to put up great numbers. He then moved to Cleveland and also continued putting up good numbers. In 2004, Burks returned to the Red Sox to close out his career in eleven games.

For his career, Burks hit .291/.363/.510/.874 with 352 home runs, 1,206 RBIs, and 181 stolen bases. Had he played in any other era, Burks's numbers may have been enough to gain him some recognition in the Hall of Fame ballots. Unfortunately, he played at a time of major offensive production, so his career was something of an afterthought. Burks's career WAR is higher than Red Sox Hall of Famer Jim Rice, as well as Orlando Cepeda, Larry Doby, Ralph Kiner, and Kirby Puckett.

THE VERDICT
Burks was eliminated from consideration by the BBWAA in his first year of eligibility, receiving only two votes. He probably deserved better than that, but his career is not that of a Hall of Famer. He was a very good, but seldom great player.
Posted by Metallattorney at 12:09 PM

Email ThisBlogThis!Share to TwitterShare to FacebookShare to Pinterest
Labels: burks, hall of fame