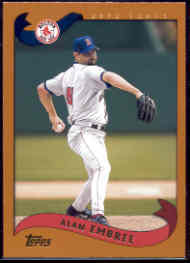 Alan Embree made an immediate impact upon his acquisition in 2002. He was acquired in a trade with the Padres along with Andy Shibilo for Brad Baker and Dan Giese, who never really did much in the Majors. Embree however, proved to be an extremely important arm out of the bullpen for the Red Sox through the 2004 season. He was used in a variety of roles, from setup man to situational lefty to closer.

In 2002, Embree pitched to a record of 1-2 with a 2.97 ERA and 43 strikeouts in 33.1 innings. His ERA was higher and his strikeout rates were lower the next two years, but he remained a vital part of the bullpen. He was particularly impressive in the postseasons with the Red Sox. He gave up only two earned runs in 19 innings over the course of two postseasons with the Red Sox.

Embree struggled terribly in 2005 and was released. He found his way to the Yankees where he continued to struggle. He never pitched quite as well again.
Posted by Metallattorney at 11:56 PM