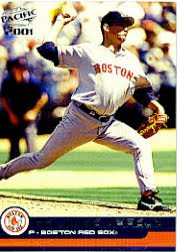 ROLANDO ARROJO
In 2000, the Red Sox were still seeking more rotation help. They swung a deal with the Colorado Rockies for Rolando Arrojo, who looked like a potentially decent starting pitcher. The Red Sox were able to make the deal because they were willing to take on Mike Lansing's bad contract.

In 2001, Arrojo went 5-4 with a better ERA as an arm out of the bullpen. His strikeout rate was up. The next year, he had a similar role.

Arrojo was not a huge bust, but he was not the solid starter that he was expected to be when Boston picked him up.
Posted by Metallattorney at 3:34 PM