Boston traded a lot of players away today and throughout the week.  The only really exciting player they received was Yoenis Cespedes.  It is a clear sign that they do not intend to try to work it out this year and just build for next season.

I got a trade package that helps out a little bit with the frustration of losing so many beloved players (well mostly Jon Lester anyway). 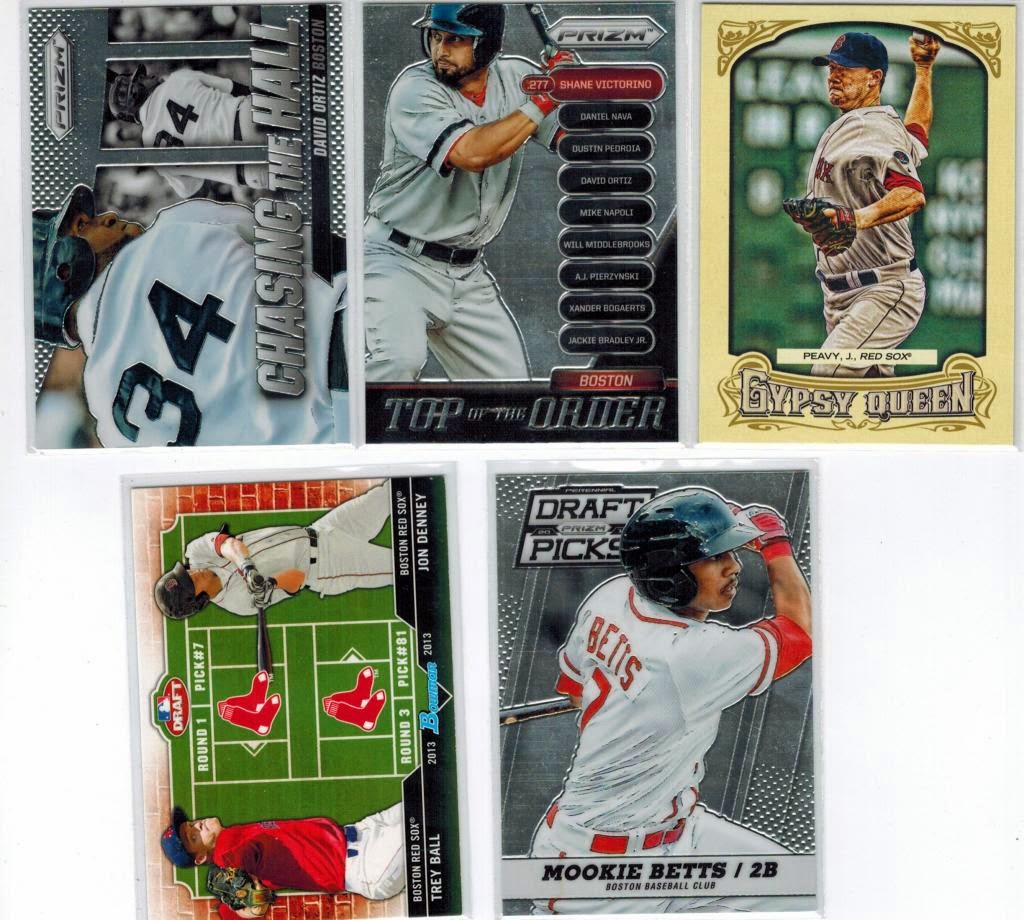 1.  2014 Prizm Chasing the Hall David Ortiz.  Is Ortiz a Hall of Famer?  Very possibly.  He has continued to hit well, well into his late 30's.  He has 25 home runs this year even though his other numbers are way down.

2.  2014 Prizm Top of the Order Shane Victorino.  I honestly love Prizm.  I just wish they would get an MLB license.  They have the best inserts this year, hands down.

3.  2014 Topps Gypsy Queen Jake Peavy.  The first casualty of the fire sale was traded to the Giants for Edwin Escobar and Heath Hembree.

I No Longer Recognize this Team

What happened to the Red Sox this year?
Posted by Metallattorney at 4:13 PM 2 comments:

Jake Peavy has pitched reasonably well at times, though he has only one win to show for it.  Felix Doubront or Brandon Workman probably move into the rotation.  Boston received Heath Hembree and Edwin Escobar from the Giants in the trade which is actually kind of a nice return.
Posted by Metallattorney at 11:14 AM No comments:

I bought a blaster of A&G yesterday because I have been having some decent luck with the Red Sox in that.  That continued in this blaster: 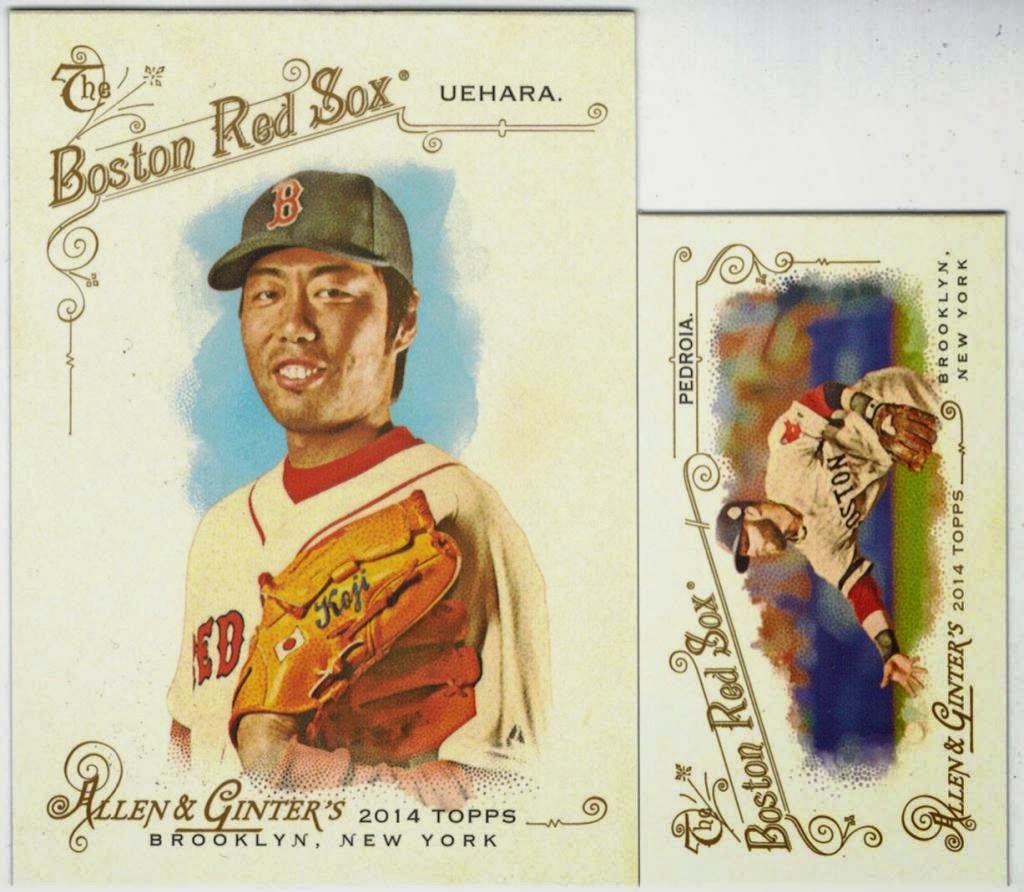 1.  2014 Topps Allen & Ginter Koji Uehara.  It is very nice to see so many Uehara cards this year.  That was to be expected since he performed so well last year.  Uehara is the player I really do not want to see traded, except for maybe Jon Lester.

2.  2014 Topps Allen & Ginter Mini A&G Dustin Pedroia.  Nice to get a decent parallel mini for the Red Sox.  Pedroia is a player that I have managed to get some decent cards of out of packs.
Posted by Metallattorney at 12:22 AM 1 comment:

A&G Pack and a Trade

It was not a big day for my Red Sox collection, but any additions are usually appreciated.  The first thing was another rack pack of A&G which resulted in one base card.  I am generally getting a few more cards out of packs than I was earlier in the year, but they are still all base cards.  The other two were from a trade that were basically throw-ins to the Sandy Alomar Jr. cards that I am showing on my other blog.  But one of them completed the 2014 Bowman Prospects set and the other was a nice card of a 2007 World Series hero. 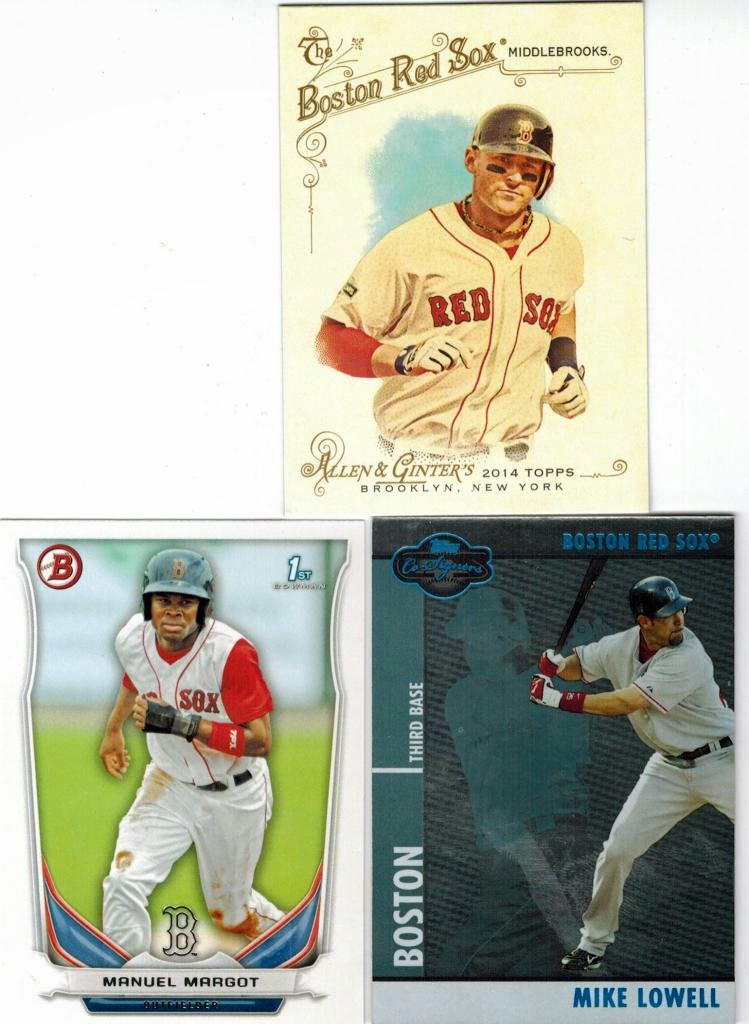 1.  2014 Topps Allen & Ginter Will Middlebrooks.  He is heating up in Pawtucket and may see a return soon.

2.  2014 Bowman Prospects Manuel Margot.  A Top 10 prospect in Boston's system, Margot has great speed and looks to be a decent leadoff hitter.

3.  1998 Topps Co-Signers Silver Blue Mike Lowell.  I really liked these cards when they were out, though I definitely prefer the dual player cards.  Still, nice to add an interesting parallel of the World Series MVP in 2007.

Posted by Metallattorney at 9:07 PM No comments:

I had the night to myself Friday as the wife went away to Kansas on an errand.  So I went out and picked up some stuff: the new Goatwhore CD, the Triptykon vinyl, a rack pack of A&G, and a blaster of Archives.  Luckily I had some decent Red Sox luck, though they were all base: 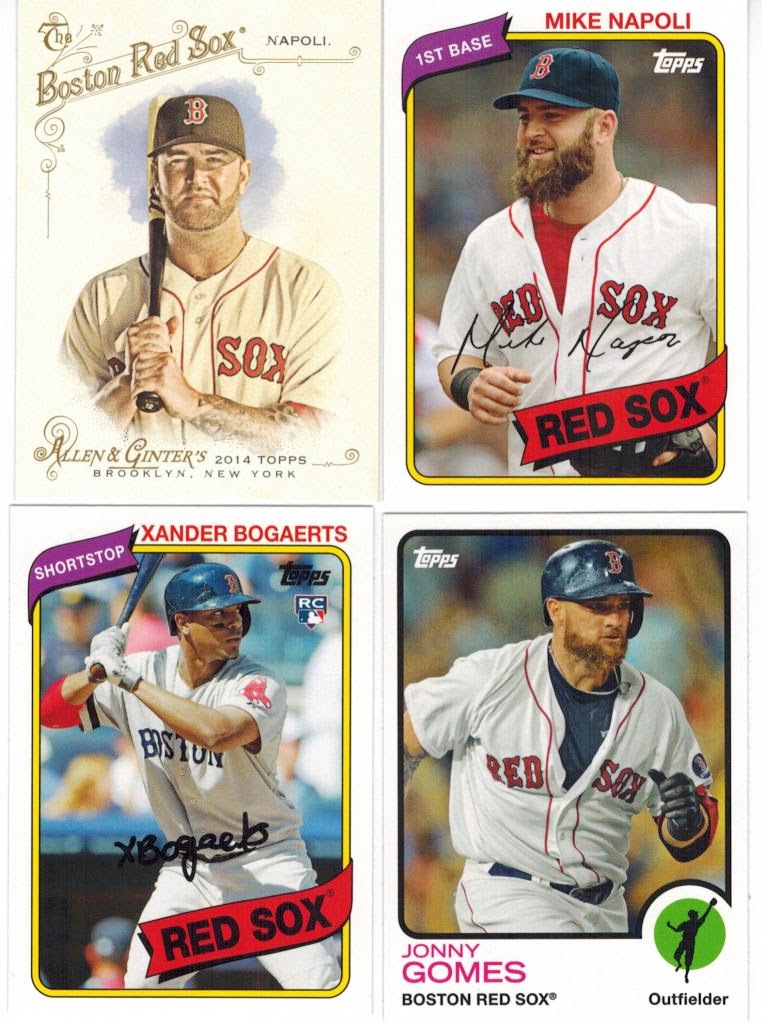 3.  2014 Topps Archives Xander Bogaerts.  I have been a getting a bunch of Xanders lately.  You will not hear me complain.

4.  2014 Topps Archives Jonny Gomes.  I love this card.  Gomes has been so much fun to watch in his time in Boston.  Too bad it is likely coming to a close soon.
Posted by Metallattorney at 9:19 PM 1 comment:

I have not been getting too many trades done lately.  No real explanation for that, I have no idea what is going on.  So I am way behind on getting 2014 Red Sox cards.  Luckily this trade changed that quite a bit: 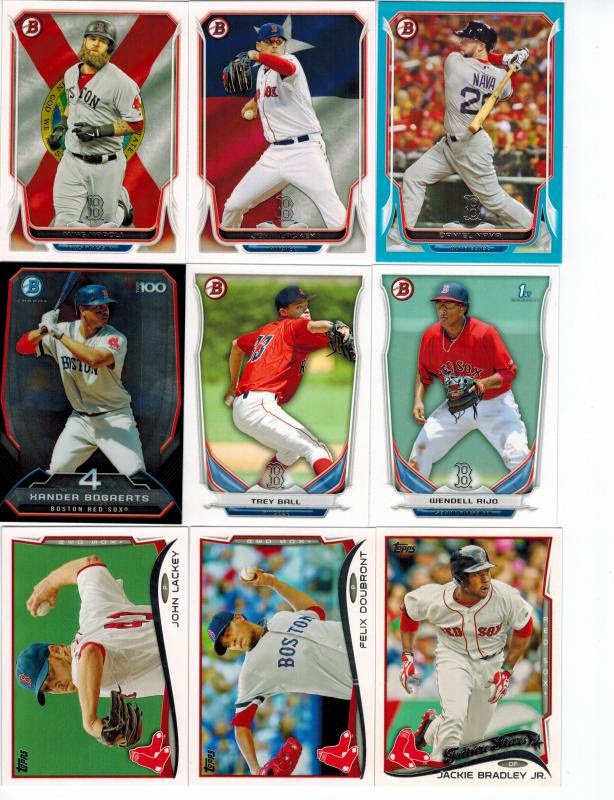 2.  2014 Bowman Homestate/International John Lackey.  I wish there was a Red Sox player from Nebraska in this set.  Get the Nebraska flag on there.  I could be wrong but I think Alex Gordon, Connor Gillaspie, and Joba Chamberlain are the only Nebraska natives in the Major Leagues right now.

3.  2014 Bowman Blue Daniel Nava.  Nava is starting to come around and hit like he did last year.

4.  2014 Bowman Chrome Top 100 Xander Bogaerts.  He might be coming around again too.  He just hit a home run earlier tonight.

6.  2014 Bowman Prospects Wendell Rijo.  Boston has a ton of good prospects coming up.  This is another one.

7.  2014 Topps John Lackey.  Lackey has some nice numbers this year.  The question is whether he will be traded or not since he has a favorable contract next year.

8.  2014 Topps Felix Doubront.  What is with Topps and horizontal shots for Doubront?  He has had a card in the regular Topps set each of the last three years and all of them have been horizontal.  Strange.

9.  2014 Topps Jackie Bradley Jr.  Another hitter who is starting to come around. 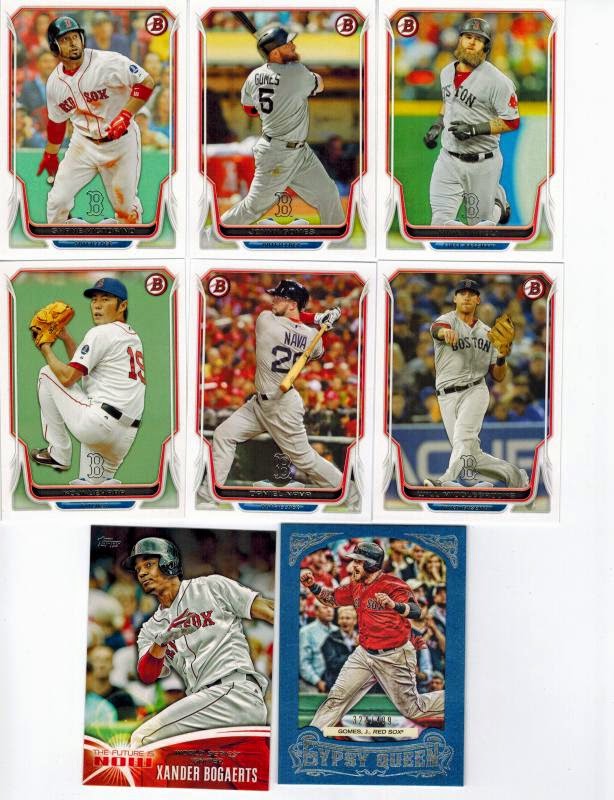 11.  2014 Bowman Jonny Gomes.  I expect him to be traded as well.  Kind of sad as he has become a leader on the team, kind of like Kevin Millar was.

13.  2014 Bowman Koji Uehara.  Of all the players mentioned in trade rumors, this one would bother me the most.  Boston has proven how difficult it is to acquire a reliable closer the last few years.  Koji will be 40 next year, but who would they get to replace him? 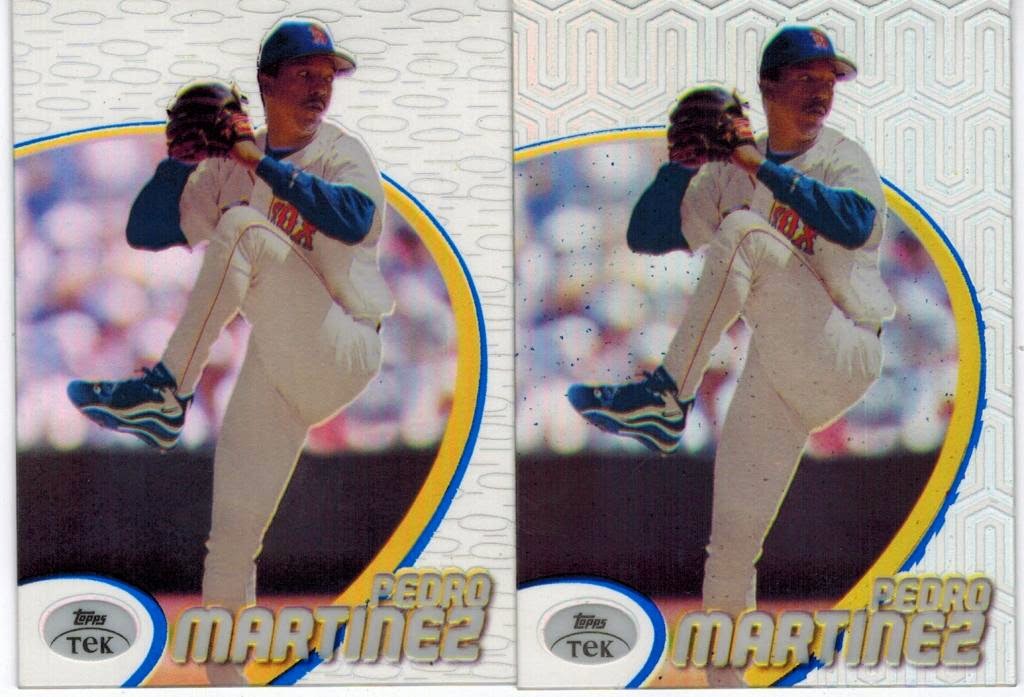 I have been on a search for all of the patterns of the 1998 Topps Tek Sandy Alomar Jr. cards.  Recently I bought a lot of about 35 Tek singles which contained one Alomar that I needed.  Also in that lot were these two Pedro Martinez cards.  I once seriously considered chasing all of the Nomar Garciaparra cards from the set, but that was before I was on Ebay.  I got as far as three cards.  Since then I have picked up one more.  Pedro, on the other hand, I did not get until just recently.  I now have three patterns for him.
Posted by Metallattorney at 3:22 PM No comments:

Recently I went a little bit nuts on blasters.  I picked up three.  I have not had the best luck with packs this year.  I have not been getting many Red Sox in packs at all.  I would be a little bit more lucky with this binge. 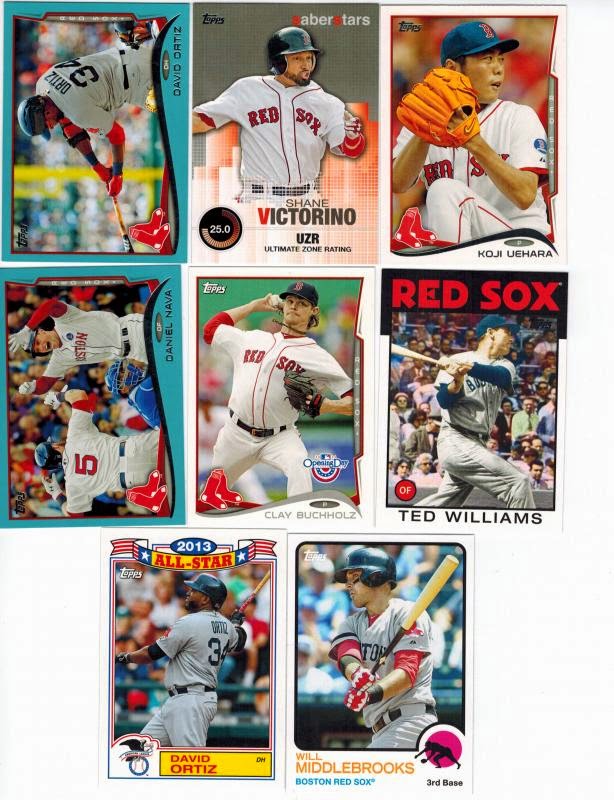 1.  2014 Topps Wal Mart Blue David Ortiz.  Nice shot of Ortiz here.  He might be making contact, something that has not happened nearly often enough this year.

2.  2014 Topps Saberstars Shane Victorino.  Victorino has been almost a complete bust this year.  He has barely played and been bad when he has played.

3.  2014 Topps Koji Uehara.  One of the few bright spots for Boston this year.  He'll probably be traded.

5.  2014 Topps Opening Day Clay Buchholz.  He has shown some signs of pitching better since returning from the DL.

6.  2014 Topps Archives Ted Williams.  The Splendid Splinter played on plenty of bad Red Sox teams in his career.  He would fit in well this year.

8.  2014 Topps Archives Will Middlebrooks.  I am not sure he fits into Boston's future plans at all at this point.  Just a huge disappointment since his rookie season.
Posted by Metallattorney at 9:56 PM No comments: