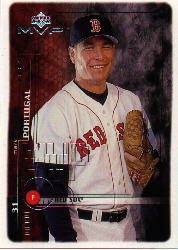 MARK PORTUGAL and PAT RAPP
In 1999, the Red Sox sought to fill out the back end of their rotation by signing free agents Mark Portugal from the Phillies and Pat Rapp from the Royals. Neither pitcher was very good for the Red Sox, with Rapp being only slightly better.

Portugal had a great changeup and won ten games for the Phillies the year before. But he was an unmitigated disaster with the Red Sox. Portugal went 7-12 for the Red Sox with a 5.51 ERA and 79 strikeouts in 150.1 innings. Portugal was released prior to the end of the season.

Rapp was only slightly better. He had won 12 games for the Royals the year before, but was non-tendered and the Red Sox plucked him in January. Rapp went 6-7 with a 4.12 ERA and 90 strikeouts in 146.1 innings. He also pitched in relief on occasion.

Pitching was the reason the Red Sox did not make it farther in October that year. Outside of Pedro Martinez and Bret Saberhagen, the Red Sox had to mix and match pitchers. Rapp and Portugal were a big part of the problem. Kent Mercker was acquired late in the season to help.
Posted by Metallattorney at 12:25 PM