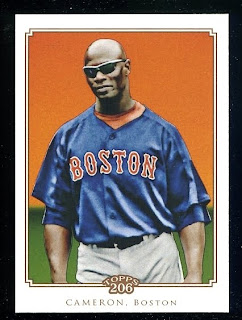 Mike Cameron has been designated for assignment.

This actually makes me kind of sad. I really liked Mike Cameron, but it was clear he was not the player he once was. He also dealt with a lot of injuries in his brief time with the Red Sox. Cameron was not expected to be a starter, but he was supposed to get a lot of at-bats, platooning with J.D. Drew and Jacoby Ellsbury on occasion. But last year, in his first year in Boston, he only made it into 48 games, hitting .259/.328/.401/.729 with only four home runs. This year, it was worse, hitting .149/.212/.266/.477 with three home runs in 33 games.

The Red Sox have ten days to trade or release Cameron. Here's hoping he is traded.

Yamaico Navarro was recalled to take his place.
Posted by Metallattorney at 7:35 PM No comments: 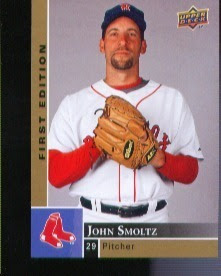 JOHN SMOLTZ
John Smoltz will be in the Hall of Fame some day. But that has absolutely nothing to do with his short time with the Boston Red Sox. Smoltz had proven his ability as both a terrific starter and an excellent closer during his time with the Braves. He wanted to return to Atlanta for his final season in 2009, but felt like the team did not want him, so he spurned their offer and signed a contract with the Red Sox.

With Boston, Smoltz really showed his age. The 42 year old pitched to a record of 2-5 with an 8.33 ERA in eight games. He did strike out 33 against only nine walks in 40 innings, but it was clear he was not going to be much help in the rotation for the Red Sox.

The Red Sox decided to eat his contract and cut him loose. He did catch on with the Cardinals and improved somewhat, but retired at the end of the season.

Smoltz will go down as one of those pitchers who hung on just a little longer than he should have and played with some teams that will be forgotten about in a few years.
Posted by Metallattorney at 10:53 AM No comments: 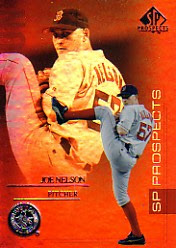 JOE NELSON
Joe Nelson pitched in exactly three games for the Red Sox in 2004. And he did not really pitch well either, accumulating a 16.88 ERA, while walking three in 2 2/3 innings, but he did strike out five. So, it was not much of a surprise that he did not re-emerge in the majors until 2006 when he pitched in 43 games for the pitching-starved Royals. He then became a serviceable middle reliever for the Marlins and Rays in 2008 and 2009 respectively and returned to the Red Sox in 2010, for whom he once again flopped, pitching in eight games with an ERA above 9.00.
Posted by Metallattorney at 1:50 PM No comments:

Email ThisBlogThis!Share to TwitterShare to FacebookShare to Pinterest
Labels: nelson, one card wonder 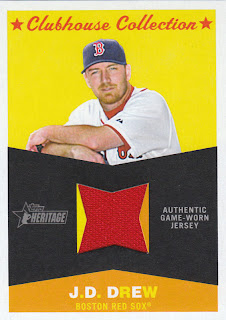 "Is It Time for Theo to Break Out the Sunk-Cost Diaries?"

I know, I know. I have been terrible about posting for quite some time. I have been working on opening up my own law office, planning a wedding, and moving. Now that the office is running relatively smoothly, the wedding and honeymoon have passed, and life is beginning to seem somewhat normal, I figure I can get back to things here.

Anyway, on June 22, Boston Dirt Dogs posted that question regarding J.D. Drew. I think the bashing that Drew gets is completely unwarranted. I understand that there is just something that fans hate about Drew, but I never totally understood it. Even before he was a Red Sox player, I never got the hate. Sure Phillies fans hate him because he refused to sign a contract with them when he was drafted. Sure Dodgers fans hate him because he opted out of his contract to leave the team, but why in the hell do Red Sox fans hate J.D. Drew?

Drew is having a bad year this year, and I do not think he will be back next year as the team has two up and coming players in Josh Reddick and Ryan Kalish who are capable of replacing him. But, his time in Boston has been impressive. He put up OPS+ numbers of 105, 137, 133, and 110 in his first four years in Boston, which included a dramatic grand slam in the ALCS against Cleveland in 2007, helping to propel the team to the World Series, and an All Star Game MVP Award in 2008. He has been a consistently good hitter with a terrific on base percentage up until last year and has been a good defensive player.

I think the thing that fans hate about him is that he is so effortless. He just plays like it's the most natural thing in the world. He does not get too emotional about things and he does not really stand out. He is being paid a lot of money, but to me, he has been worth it up until this year.

I for one, will be sorry to see J.D. Drew leave after this year.
Posted by Metallattorney at 6:48 PM No comments: