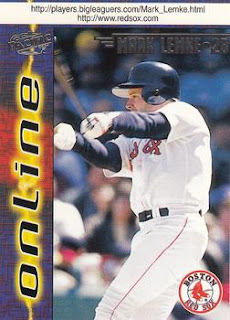 MARK LEMKE
Mark Lemke was one of my early favorite non-Red Sox players when he was with the Atlanta Braves in the early 1990's. He was a good-fielding second-baseman who did not hit much but seemed to play hard all the time. I have always liked players like that, although he was not really a good player.

Lemke came to the Red Sox in the 1998 season to keep second base warm for the prospect Donnie Sadler. Unfortunately, Lemke only played 31 games for the Red Sox before suffering a concussion in a game that kept him out the rest of the season. His career was over.

Since Lemke went down with an injury and Sadler never really developed, second base duties were mostly handled by Mike Benjamin who parlayed a decent season into a mind-boggling multi-year deal with the Pirates.
Posted by Metallattorney at 4:58 PM

Email ThisBlogThis!Share to TwitterShare to FacebookShare to Pinterest
Labels: lemke, one card wonder