A Few Trades and a 63 Fleer Tito Francona to Trade

A few trade items have come in that have gradually made me feel a little bit better about 2014 Topps, now that I am getting a few more cards here and there: 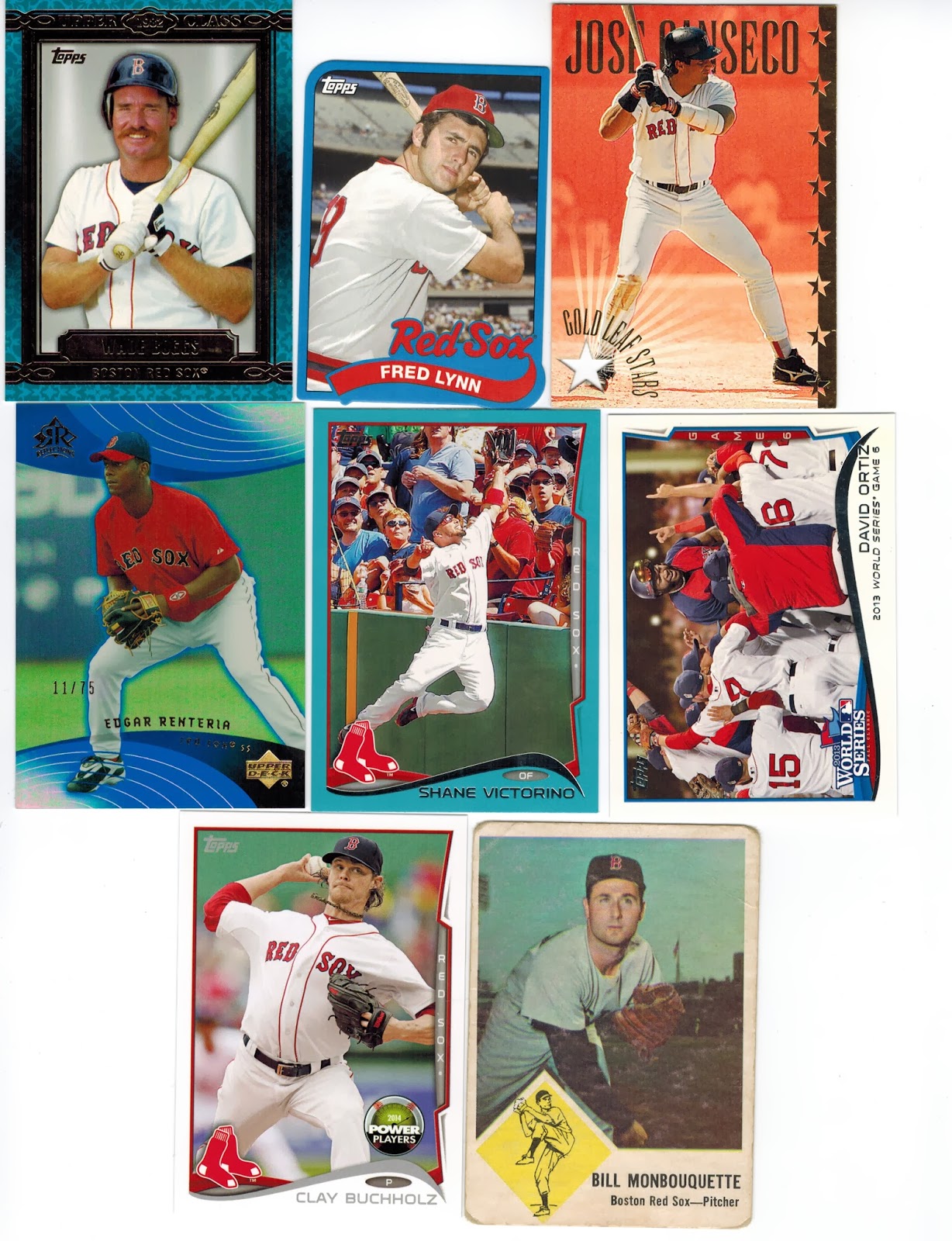 1.  2014 Topps Upper Class Wade Boggs.  I have said it several times, Wade Boggs was my first favorite player.  I was heartbroken when he signed with the Yankees.  It was one of the first things that made me hate the Yankees.  I know now that Boston did not really make an effort to retain him, but I was 11 at the time.  I did not really understand that.

3.  1995 Leaf Gold Stars Jose Canseco.  I still like getting Canseco cards with the Red Sox.  Canseco was my older brother's first favorite player and he stopped watching baseball shortly after Canseco was traded to the Rangers.

4.  2005 Reflections Blue Edgar Renteria.  I was so disappointed when Renteria turned out to be a bust in Boston.  I liked Renteria from the time he came up with the Marlins and liked watching him with the Cardinals.  I do wonder if he would have done better the next season if he had not been traded.

5.  2014 Topps Wal Mart Blue Shane Victorino.  I love this action shot of The Flyin' Hawaiian.  Looking forward to seeing what he can do this year.

7.  2014 Topps Power Players Clay Buchholz.  I had some luck in last year's interactive program so I will try again this year.  I would love to get a nice online-only Red Sox piece.

8.  1963 Fleer Bill Monbouquette.  One of the few bright spots in the 1960's for the Red Sox, Monbo was a pretty good pitcher.  I got this as well as the below card and the previous three for a George Brett commemorative patch.  A pretty good trade if you ask me. 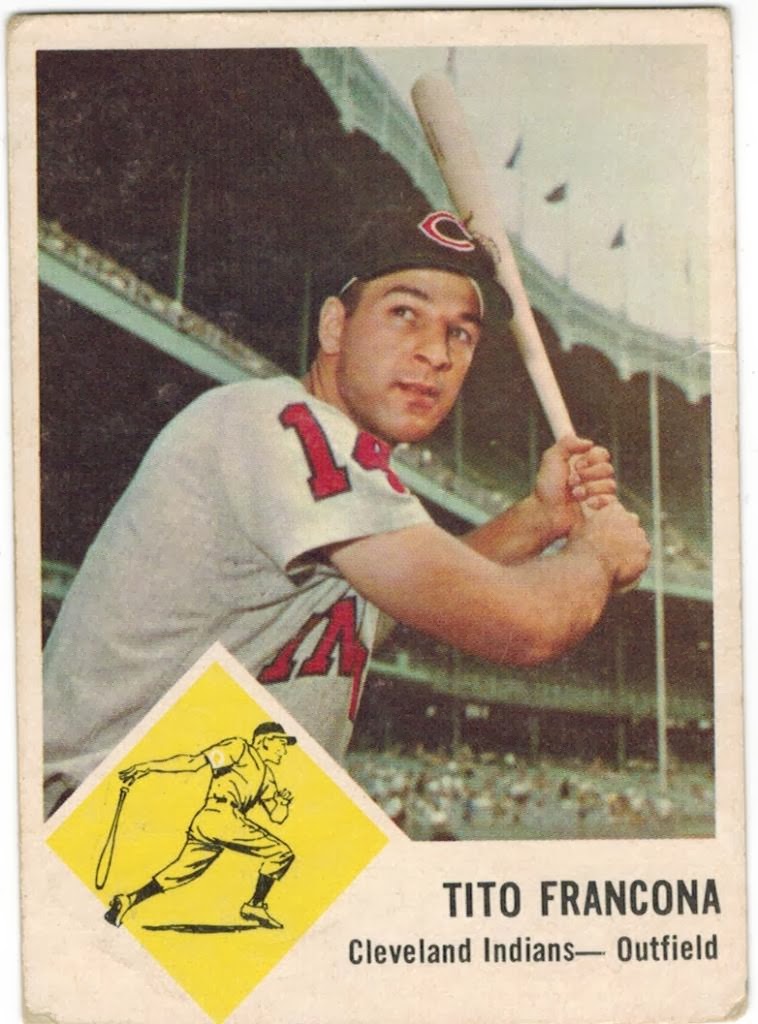 Does anyone want this?  Does anyone possibly have the Lou Clinton?  This is Terry's father.  I picked this because there was a big discrepancy between my Brett card and the Monbo earlier and I did not want to pass up a chance to get it.  So I took a card I did not have a lot of interest in that I figured I could flip for something I do want.  I would love to trade it for the 1963 Fleer Lou Clinton first, but then anything from Topps of the same general period.
Posted by Metallattorney at 10:47 PM 1 comment:

2014 Topps is Frustrating Me

For some reason I have not been doing very well with packs.  I have opened up quite a bit of 2014 Topps with very little to show for it Red Sox-wise.  And so I have been trying to do as much as I can with trading, which has also been slow.  So here I am, a long way away from the team set in base and very little to show in the way of parallels and inserts so far. 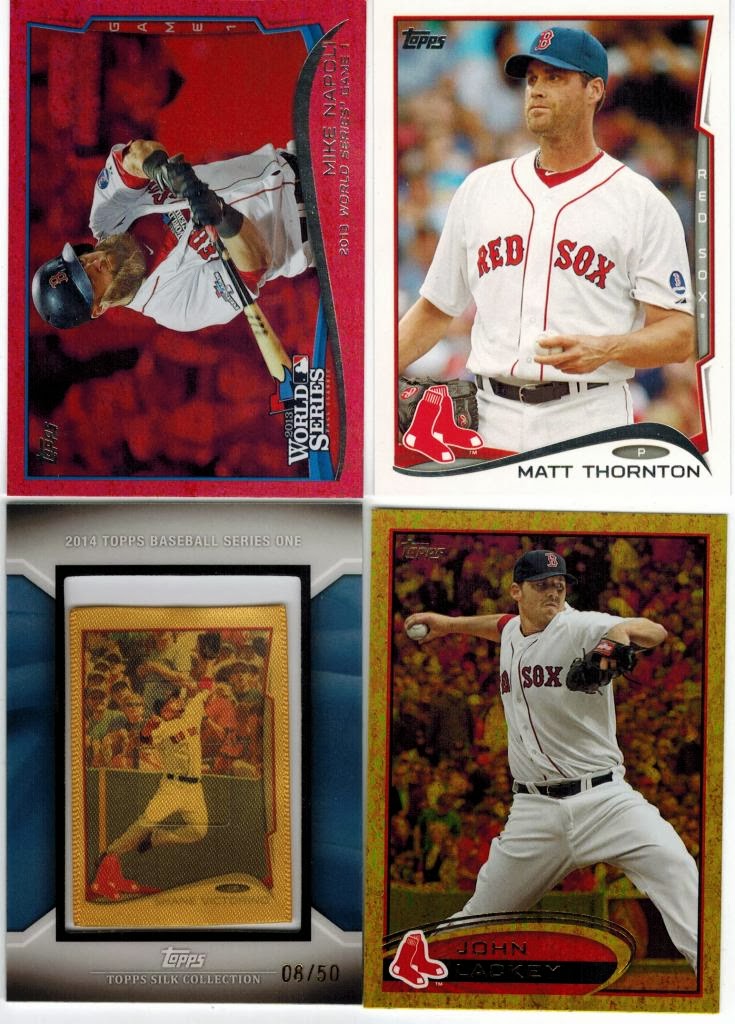 1.  2014 Topps Red Hot Foil Mike Napoli WS.  What a beard.  Amazing.  Napoli appeared at Spring Training still sporting that thing.  This one I got in a pack just as I was waiting to receive it in a trade.  <Facepalm>.

2.  2014 Topps Matt Thornton.  Thornton did not make the World Series roster and will be suiting up with the Yankees in 2014.  I am glad to see him make this set though.  This one was pulled in a pack too.

3.  2014 Topps Silk Shane Victorino.  I bought this on Ebay.  What a great picture of Shane going into the stands for a catch.  Great card.

4.  2012 Topps Gold Sparkle John Lackey.  And this is the other card I got in the trade that gave me the Napoli double.  I will be interested to see if Lackey pitches well again in 2014. 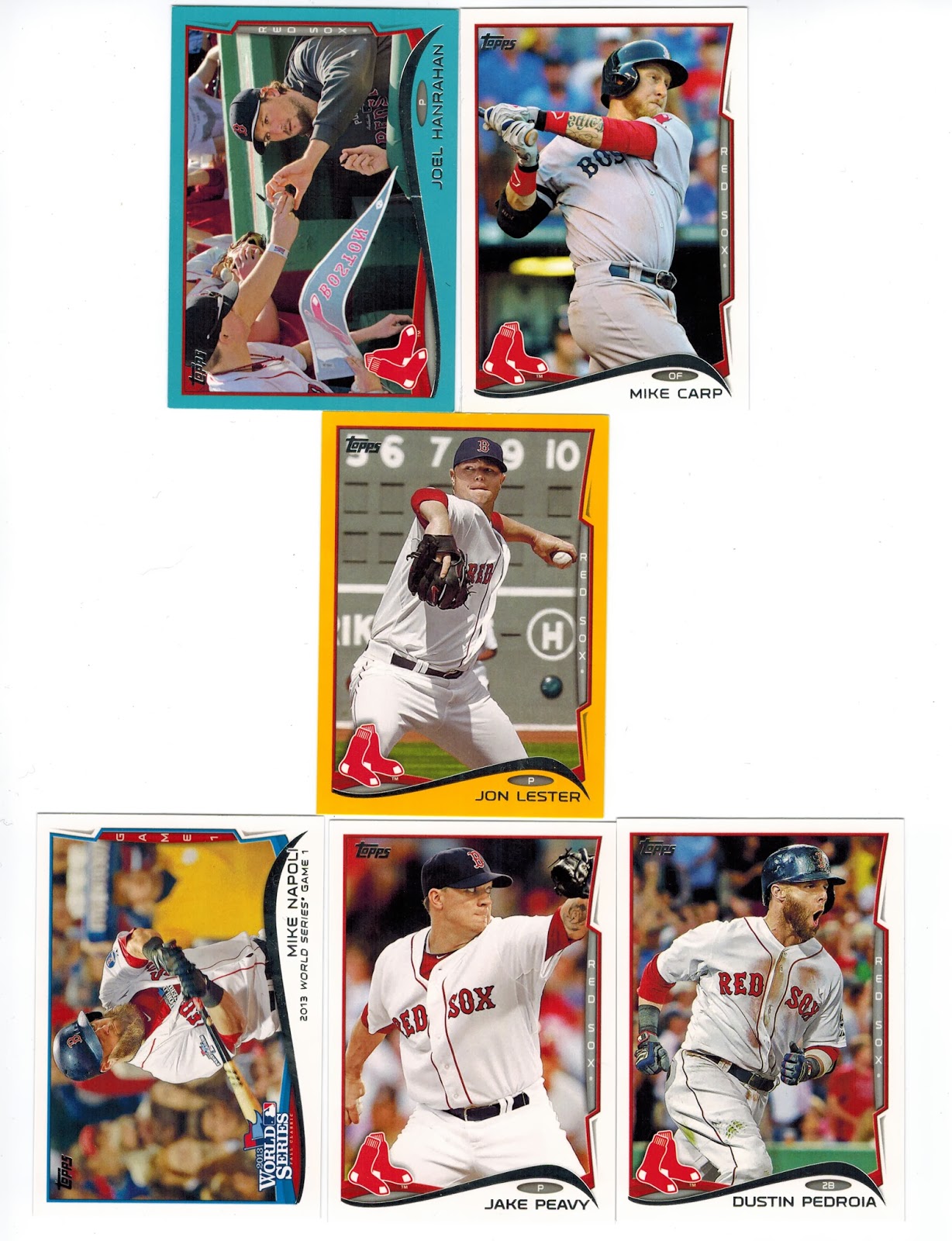 5.  2014 Topps Wal Mart Blue Joel Hanrahan.  Unfortunately the Hanrahan trade did not work out, but I really like this picture.  This is my first Wal Mart blue from a pack.

7.  2014 Topps Yellow Jon Lester.  A one for one trade landed me this nice card of Boston's ace.  They need to lock him up to an extension soon.

9.  2014 Topps Jake Peavy.  We need a card of Jake with his new duckboat that he bought after the World Series parade.

10.  2014 Topps Dustin Pedroia.  And no set of Red Sox cards would be complete without a Laser Show.
Posted by Metallattorney at 9:28 PM 3 comments:

"O" No: A Trade with an Orioles Collector and some 2x3 Heroes

Okay, so I worked out a trade with Ryan from "O" No: Another Orioles Blog.  He expressed some interest in some Orioles cards from 2014 Topps that I had pulled and said he could throw together a nice package.  He certainly did.  From his package, I got eight new cards, and some great ones too: 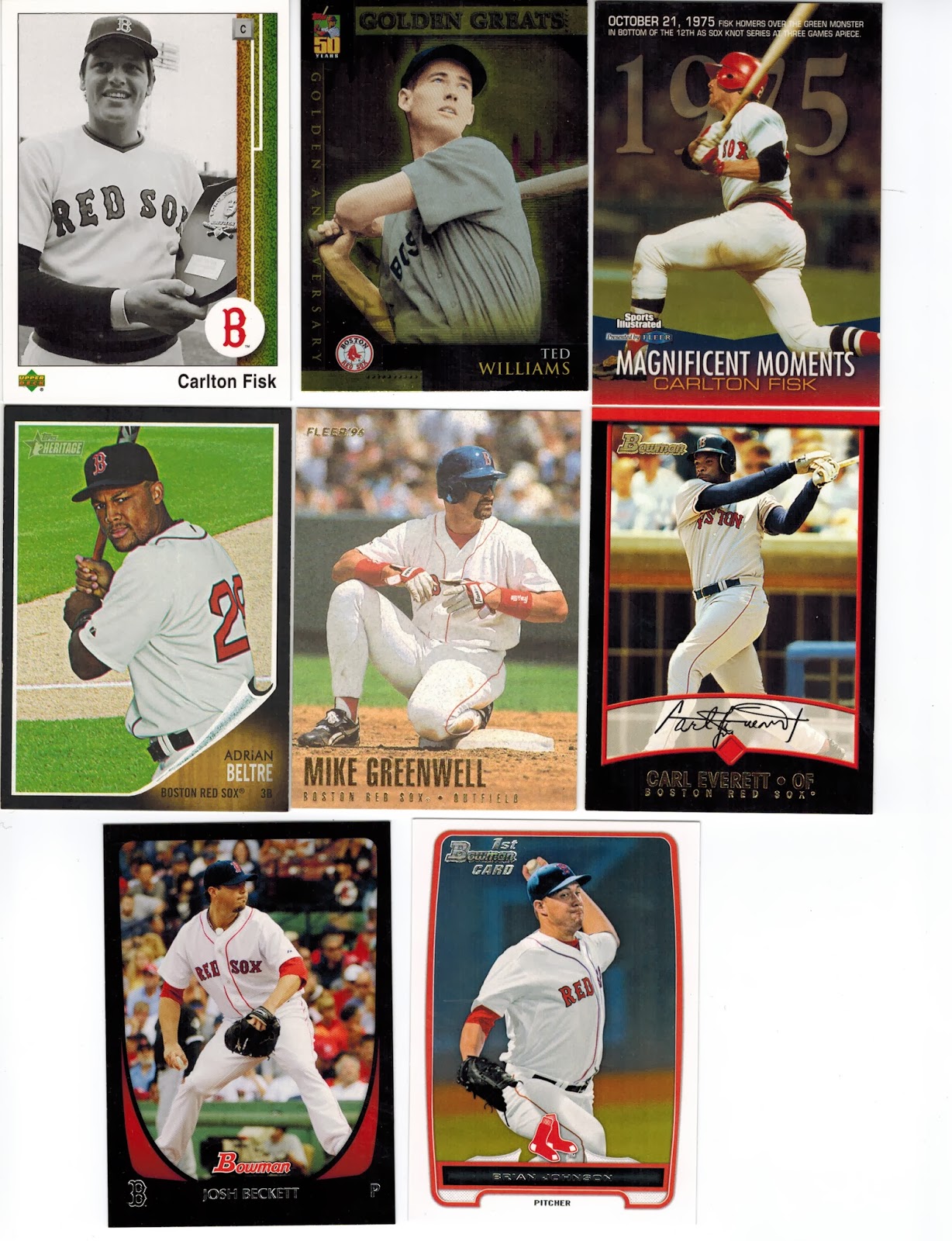 1.  2007 Upper Deck 1989 Carlton Fisk.  A terrific-looking insert of Pudge holding his Rookie of the Year award.

3.  1998 Sports Illustrated Carlton Fisk Magnificent Moments.  Yet another card commemorating his game-winning home run in Game 6 of the 1975 World Series.  A great moment that I was not yet alive to see.

4.  2011 Topps Heritage Black Adrian Beltre.  Beltre is one of my favorite One Season Wonders for the Red Sox.  He was signed as a free agent, had a great year, Boston decided to trade for Adrian Gonzalez, and Beltre was gone.  It kind of sucks that he only had one year, but what a year it was: All Star and Silver Slugger.

5.  1996 Fleer Mike Greenwell.  Greenwell was one of my first favorite players.


And next, I received a ton of stuff from Jeff over at 2x3 Heroes as part of his 'Tis the Season giveaway.  I snagged the Red Sox, Indians, and Astros, and got a bunch of doubles from Panini as well.  Here are the new Red Sox cards, my favorites obviously: 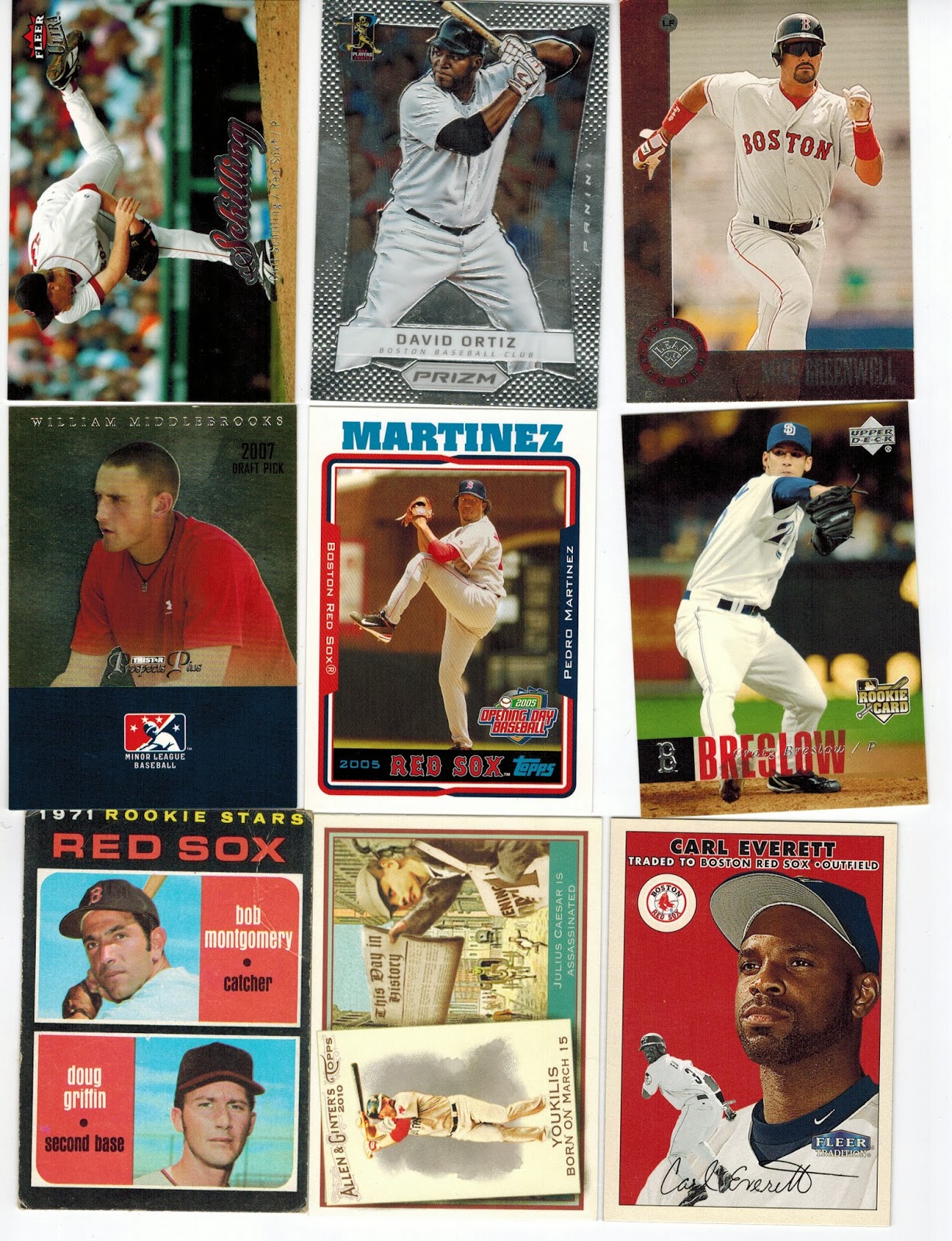 9.  2007 Ultra Retail Curt Schilling.  Schill was recently diagnosed with cancer.  Here's hoping to a speedy and complete recovery and to his eventual selection to Cooperstown.

12.  2007 Tristar Prospects Plus Will Middlebrooks.  A very early card of Jenny Dell's boyfriend.

13.  2005 Topps Opening Day Pedro Martinez.  One of the last cards depicting Pedro with the Red Sox while active.

14.  2006 Upper Deck Craig Breslow RC.  Many probably don't remember that Breslow pitched for Boston in 2006 before establishing himself as a reliable reliever.  This is his second tour of duty with the Red Sox.

15.  1971 Topps Bob Montgomery/Doug Griffin.  Monty was a backup catcher for Pudge for a long time while Griffin was a Gold Glove-winning second baseman.  Great vintage card. 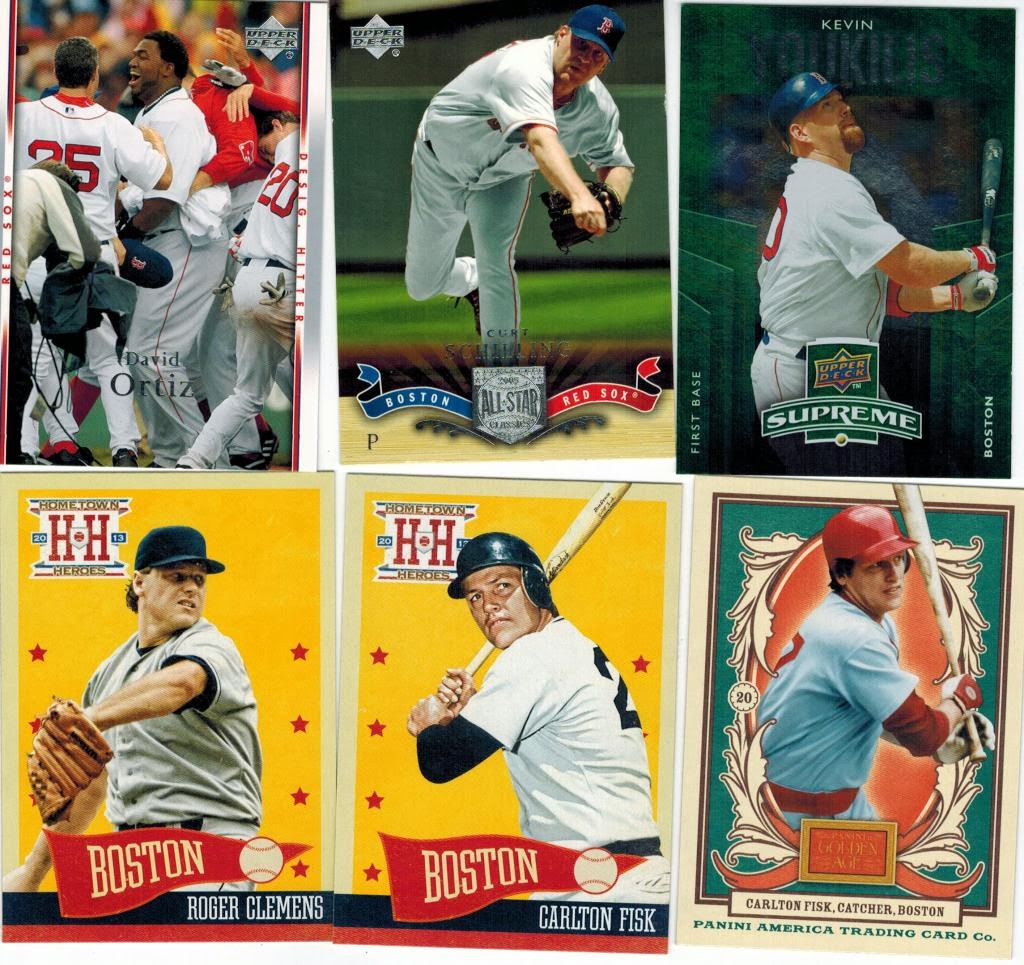 19.  2005 UD All Star Classics Curt Schilling.  Schill had one All Star season with Boston.

20.  2010 Upper Deck Spectrum Kevin Youkilis.  Unfortunately this scan did not come out well.  The card is bright green and really cool.

And now the cards from the doubles:
21.  2013 Panini Hometown Heroes Roger Clemens.  The Rocket was another early favorite player of mine.

Thanks Jeff!
Posted by Metallattorney at 9:37 PM No comments:

A Fantastic Catch Plus Some Random Stuff

I know, I know.  Very slow to post lately.

I worked out a trade with Weston from Fantastic Catch.  He contacted me to tell me that he had one of my Top Ten Most Wanted cards and wanted to work out a deal.  The cards he sent are the first four in this scan: 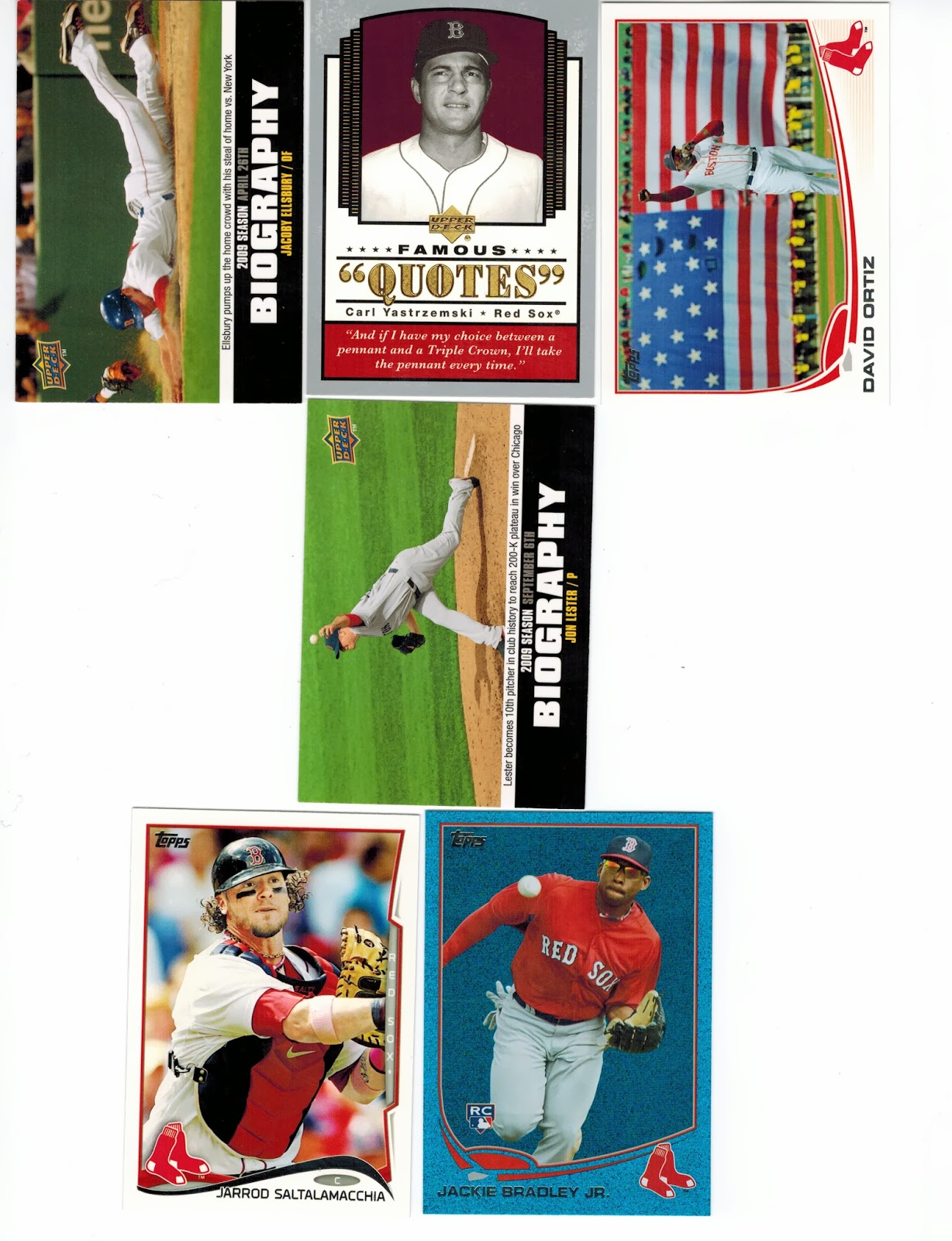 1.  2010 Upper Deck Season Biography Jacoby Ellsbury.  Commemorating his straight steal of home against the Yankees, this was one of my favorite Yankees-Red Sox moments.  Some day I should do a post about that.

3.  2013 Topps David Ortiz SP VAR.  This was THE card I wanted from last year.  Just a terrific looking card, with the American flag background.  I remember watching this moment on TV.  A terrific game too.

5.  2014 Topps Jarrod Saltalamacchia.  I bought a rack pack, this was my only Red Sox pull.

And now for the tradebait: 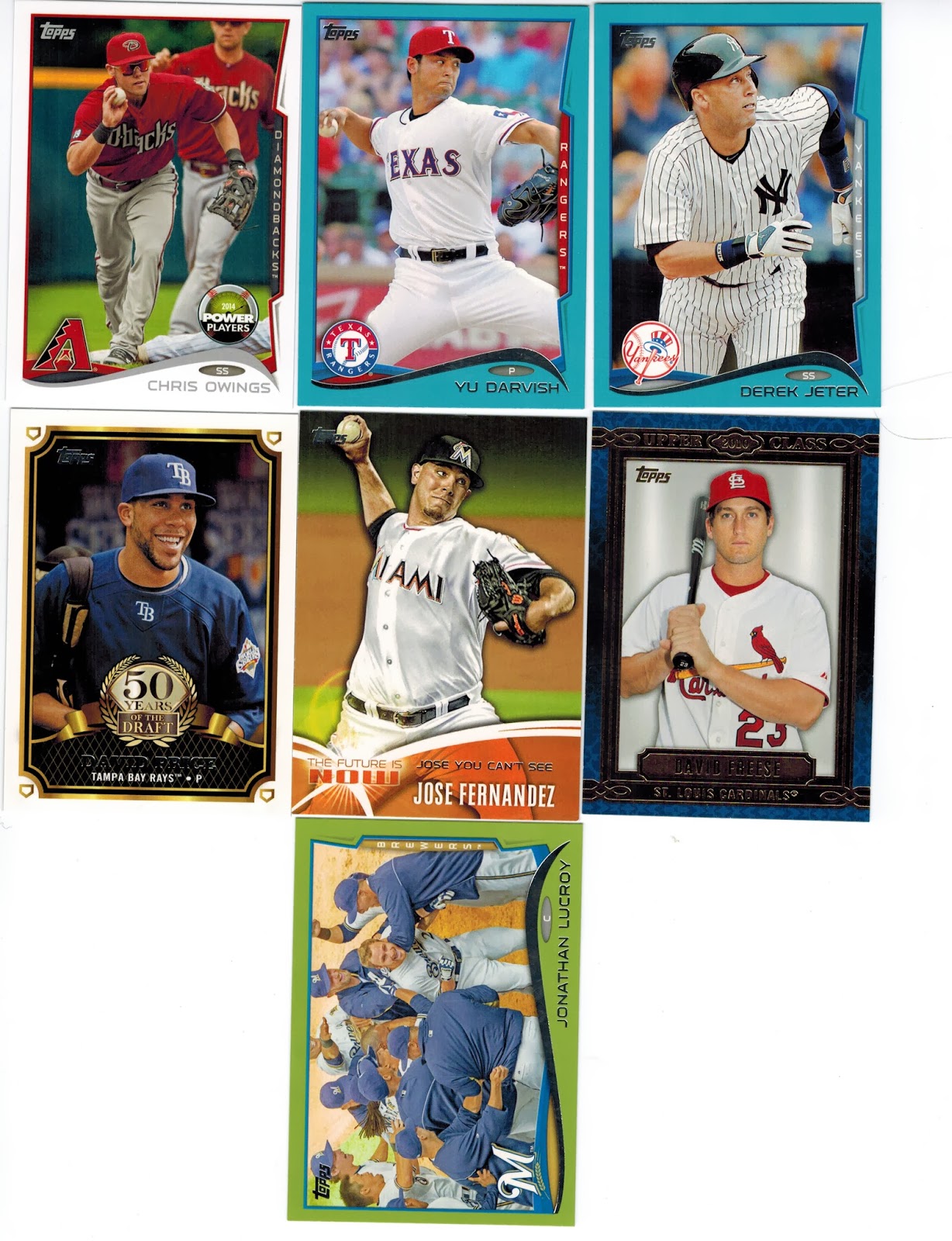