Feature: Red Sox for About 5 Minutes

Let's look at some of these surprising players, who for about five minutes, were Boston Red Sox:

ROGER PECKINPAUGH
Roger Peckinpaugh was a great shortstop during the Dead Ball Era for the Yankees. He was even the league's MVP in 1925 when he was with the Washington Senators, though that was a few years after his very brief stint with the Red Sox. Peckinpaugh had a very good 1919 for the Yankees, hitting .305/.390/.404/.794, good numbers for a middle infielder at the time. Peckinpaugh was traded to the Red Sox as one of the better pieces the team acquired when they were trading their best players to the Yankees in the early 1920's. Peckinpaugh was acquired along with Rip Collins, Bill Piercy, Jack Quinn and $100,000.00 for Bullet Joe Bush, Sad Sam Jones, and Everett Scott in 1922. It was one of the few decent deals for the Red Sox, as Quinn was the best player from that point on. It would have looked even better had the Red Sox actually kept Peckinpaugh, but two weeks later, they shipped him off to Washington for Jumpin' Joe Dugan and Frank O'Rourke. Of course a few months into the season, the Red Sox would trade Dugan, a fine player in his own right, to the Yankees.

ROLLIE FINGERS
The story of Rollie Fingers's very brief stint with the Red Sox in 1976 is well-known. The Oakland Athletics were having money problems and owner Charles Finley was attempting to purge the team to help. Finley sold Fingers, one of the league's top relievers and a future Hall of Famer, along with Joe Rudi to the Red Sox for $1 million apiece. Just a few days later, Baseball Commissioner Bowie Kuhn voided the sales as "against the best interests of baseball". Fingers and Rudi were in uniform at one game, but never appeared. If they had, perhaps things would have been different. Rudi eventually played for the Red Sox in 1982, but Fingers never did.

TOM HENKE
I remember this vividly, but I cannot for the life of me find anything about what happened. I had a newspaper article from late 1992 that stated the Red Sox had signed both Henke and Andre Dawson. But the deal must have fallen through or something and Henke later signed with the Texas Rangers. I was upset because I was only 12 and I really liked Henke with the Blue Jays and was looking forward to seeing him with the Red Sox.

MARTY CORDOVA
See above for Bob Hamelin. Cordova was the Rookie of the Year the year after Hamelin. Cordova though, at least was able to continue in a reserve role for a number of other teams after his failed tryout with the Red Sox in 2000. 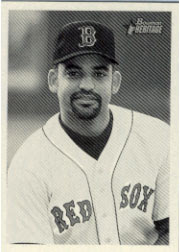 QUILVIO VERAS
The former speedster Quilvio Veras was picked up by the Red Sox in late August 2001 as a free agent after a couple of injury-plagued seasons. He played only three games in AAA Pawtucket that year due to continuing injury problems. But hey, he has a Red Sox baseball card despite not playing a single game at the Major League level with the Red Sox.

MIKE GONZALEZ
He was not a well-known player at the time, but he has had some big years out of the bullpen recently. In 2002, Gonzalez and Scott Sauerbeck were acquired by the Red Sox from Pittsburgh for Brandon Lyon and Anastacio Martinez. Sauerbeck was the big piece and Gonzalez had not yet appeared in the Majors. He was sent to AAA Pawtucket. A little more than a month later, the Pirates discovered some problems with Lyon's shoulder and the Red Sox, in order to appease them, returned Gonzalez in exchange for Lyon and Martinez as part of a larger deal that also resulted in Boston trading Freddy Sanchez and getting Jeff Suppan. This really did not work out well for Boston as Sanchez went on to become an All Star and batting champ, and neither Suppan nor Sauerbeck pitched well for Boston down the stretch. At least Lyon was included in the Curt Schilling deal.

CHARLES JOHNSON
The former All Star and great defensive catcher Charles Johnson was acquired along with Chris Narveson in a trade by the Red Sox from the Colorado Rockies for pitcher Byung Hyun Kim. It was a salary dump and Johnson was released the same day. He later found his way to Tampa Bay, but his career was basically over. 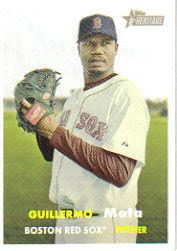 GUILLERMO MOTA and ANDY MARTE
Reliever Guillermo Mota and third-baseman Andy Marte were acquired in different trades in the offseason after 2005 and then traded away in the same deal. Mota was acquired along with Josh Beckett and Mike Lowell from Florida for Hanley Ramirez, Anibal Sanchez, Jesus Delgado, and Harvey Garcia. Marte was one of the top prospects in the game when he was traded from the Braves to the Red Sox for Edgar Renteria. Both players were packaged a short time later with Kelly Shoppach and a player to be named later for Coco Crisp, David Riske, and Josh Bard.

HEE-SEOP CHOI
Hee-Seop Choi carried a lot of hype for years in his time with the Cubs, Marlins, and Dodgers. He was supposed to be a big power hitter, but never managed to stay on the field long enough to reach his full potential. When the Dodgers tired of this, they placed him on waivers and the Red Sox took a flyer. He never made it out of AAA for Boston though.

CARLOS DELGADO
The former big-time slugger with Toronto, Florida, and New York, was signed late in the 2010 season after coming off of an injury. He began rehabbing in Pawtucket, but was injured again and never appeared in a Major League game with the Red Sox.
Posted by Metallattorney at 4:49 AM