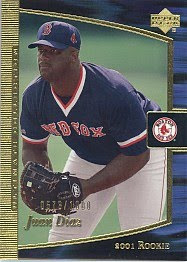 JUAN DIAZ
Juan Diaz was a Cuban undrafted free agent who signed with the Los Angeles Dodgers in 1996. After a few years in the Dodgers system, he signed as a minor league free agent with the Red Sox in 2000. He was a very large man, with big power potential. He hit 20 or more home runs in the Red Sox minor league system for three straight years. He looked like a potential star with his massive power.

But there was a problem.

After 2001, when there was a push to find accurate birth records of immigrants from Latin American countries, it was discovered that Diaz was older than originally thought. Four years older. Immediately, Diaz's prospect status was killed. A 28 year old hitting 20 or more home runs in AAA is significantly less impressive than a 24 year old.

Diaz made the Majors briefly in 2001 with the Red Sox and did hit a home run. But that was it for him.
Posted by Metallattorney at 3:10 PM