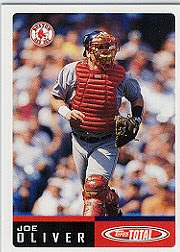 JOE OLIVER
Sometimes it's a mystery, other times it makes sense. Joe Oliver was a well-respected starting catcher in the early 1990's with the Cincinnati Reds. By the late 1990's, he was a backup. Oliver started 2001 with the Yankees and was released. He then signed with the Red Sox.

In 2001, the Red Sox suffered through a major injury to starter Jason Varitek and Scott Hatteberg was not a good option defensively. They picked up Doug Mirabelli to play a big role and then later brought Oliver up.

Joe Oliver only made it into five games with the Red Sox, with 13 at bats. He had three hits, including one double. This is the only existing card of Oliver with the Red Sox.
Posted by Metallattorney at 4:11 PM

Email ThisBlogThis!Share to TwitterShare to FacebookShare to Pinterest
Labels: oliver, one card wonder