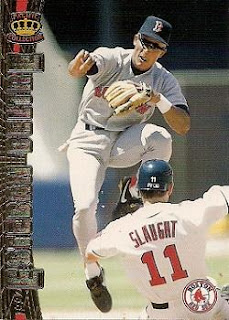 ESTEBAN BELTRE
The only card I own of Esteban Beltre is 1997 Pacific Crown Collection. Beltre played in 27 games as a backup middle infielder in 1996, hitting .258/.299/.290/.589 with six runs batted in and one stolen base. Beltre played 13 games at third base, eight at second base, six at shortstop, and one at designated hitter. He was not a particularly good defensive player and a complete zero with the bat, so it was not surprising that he was not brought back the next year.
Posted by Metallattorney at 3:20 PM

Email ThisBlogThis!Share to TwitterShare to FacebookShare to Pinterest
Labels: beltre, one card wonder