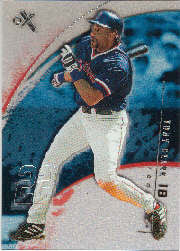 TONY CLARK
Tony Clark was an All Star in 2001, the year before he played for Boston. His home runs were down, but he had played on a bad Detroit team and his slash line was still very good. Before that, he had hit more than 25 home runs in four seasons. Nevertheless, Detroit placed him on waivers after the 2001 season and Boston snatched him up quickly. It looked like a steal, a former All Star the year before who had four seasons of more than 25 home runs under his belt.

Unfortunately, it did not work out that way. Clark was a complete waste in Boston his one season there. He hit .207/.265/.291/.556 with only three home runs and 29 RBIs in 90 games. He was done as a regular after that but was able to resurrect his career as a valuable bench player.

So what happened? My theory is that as the Players' Representative during the 2002 labor talks, Clark had too much outside stuff on his mind and was not able to concentrate on baseball. Just a theory though.

It's a good thing Brian Daubach was still around to take over.
Posted by Metallattorney at 1:16 PM