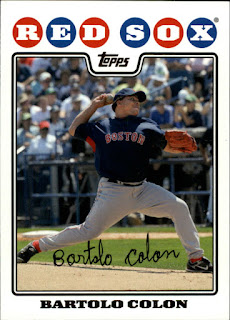 BARTOLO COLON
2005 AL Cy Young Award Winner Bartolo Colon had been experiencing some major injury problems since he won the award. In 2008, Boston took a flyer on him to see if he could help solidify the rotation. It was a low risk move. Colon was 35 and could charitably be described as hefty. He only pitched in 29 games total the previous two years.

Colon spent the first part of the year on the disabled list and rehabbing. He finally made it to Boston in the middle part of the season and pitched in only seven games for the Red Sox. Colon went 4-2 with a 3.92 ERA in those seven games, striking out 27 in 39 innings.

Colon could not stay healthy and he left the team, his Red Sox career over almost as fast as it started.
Posted by Metallattorney at 4:52 PM

Email ThisBlogThis!Share to TwitterShare to FacebookShare to Pinterest
Labels: colon, one year wonder