I'm still alive.  I'm close to being done with the big project.  I have not been picking up many cards while I have been working on things, but at least part of that has to do with the fact that I have been eagerly anticipating 2019 cards.

But there is one card that I jumped all over when it popped up, and here it is: 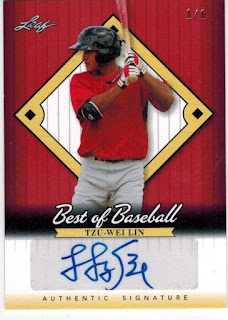 The seller tossed me another card as well: 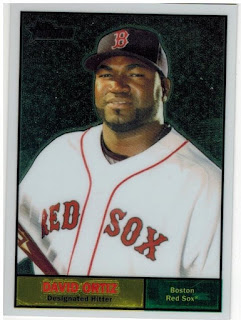 2010 Topps Heritage Chrome David Ortiz.  Hey, not gonna complain about a free Red Sox card, and it is even one I did not already own.  That is real impressive.

I should be able to start posting normally again soon.  I will have some thoughts about the Hall of Fame vote.  No Red Sox.  Damn.  And then at some point, maybe I will be getting some new cards again.
Posted by Metallattorney at 10:49 PM 3 comments:

A Lin Has Been Spotted 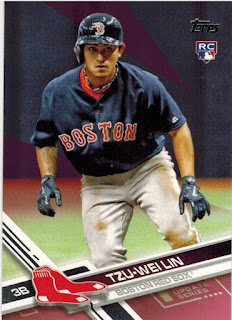 Hey look, I managed to finally find another Tzu-Wei Lin card, the first of the new year.  This is the 2017 Topps Update Mother's Day Hot Pink parallel and it is serial-numbered to 50.  I have said before and I will say again, the 2017 Topps Update parallels are kind of a focus of mine.  They have been oddly hard for me to find.  I only have the Gold, Rainbow Foil, Clear Acetate, Negative, Memorial Day Camo, and now the Mother's Day Hot Pink.  There are several still out there.

I am eagerly anticipating new card sets.  I am excited about the possibility of Lin being in some base sets again.  I know he will not be in the base set for Topps Series 1, but he does have yet another autograph.  I will be chasing those.

Hopefully Lin will make the Majors immediately coming out of Spring Training.  I thought he was a little under-used down the stretch last season and his second stint showed the contact-hitting ability he has been demonstrating in the minors the last couple of seasons.  Hopefully there is a spot for him on the Major League roster now.
Posted by Metallattorney at 8:00 AM No comments:

Finally, I managed to grab one of 2018's Red Sox Fan Favorites autos.  Though it is not the one I wanted the most, it was definitely one of the cards I focused on: 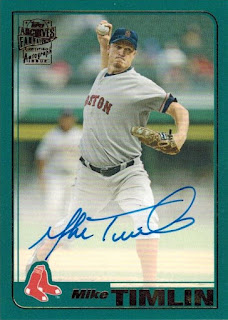 This is the Mike Timlin card.  Timlin spent six seasons in Boston, primarily as a setup man, though he was briefly the team's closer in 2005.  Timlin was a steady presence in the Red Sox bullpen, only once pitching in fewer than 50 games and generally turning in decent ERAs.  He was a part of two World Championship teams in Boston (plus two more in Toronto).  He was one of the better setup men in the game during his time with the Red Sox.

The card I wanted the most, and am still seeking is Dave Roberts.  The other note I feel like I should bring up is that I do not really care for the use of the set designs these days.  I liked it better when Topps would use set designs that were relevant to the player and the time he played for the team with whom he was depicted.  For example, 2001 Topps does not make sense with Timlin with the Red Sox.  He was with the Cardinals in 2001.  It would have made a lot more sense to put him in a 2003 to 2008 design.  Roberts and Keith Foulke are also showed with 2001 designs.  Derek Lowe is as well, but that is acceptable.  I would like to see a return to the Fan Favorites sets.
Posted by Metallattorney at 7:23 PM 1 comment:

This was actually two trades, but I received them both today and they both fit on the same scan, so here we go: 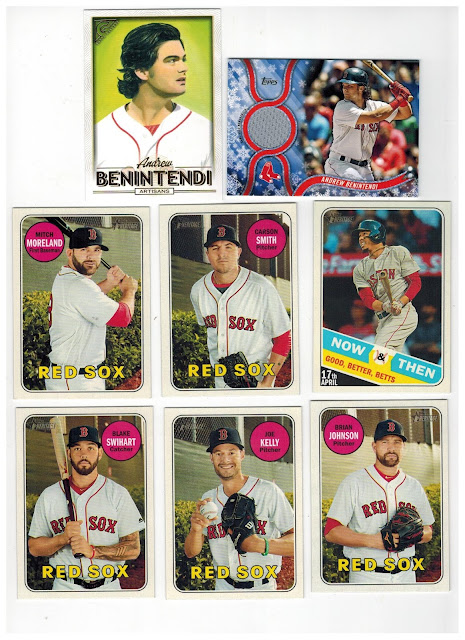 1.  2018 Topps Gallery Andrew Benintendi.  Up first is a nice short print of left-fielder Benintendi.  He had a decent year, but tended to go through some cold streaks that affected his overall numbers.

3.  2018 Topps Heritage Mitch Moreland.  In the second trade, I finished off the Heritage High Numbers team set.  Moreland had a good first half of the season, and a miserable second half, but his three-run home run in Game 4 of the World Series was HUGE.

5.  2018 Topps Heritage Now & Then Mookie Betts.  Betts hit three home runs in a game twice and hit for the cycle in another game.  He had a terrific year.

6.  2018 Topps Heritage Blake Swihart.  Swihart might be in line to take over the starting catcher position in 2019.

7.  2018 Topps Heritage Joe Kelly.  I am disappointed that Kelly left for LA after the season.  I always liked him.

8.  2018 Topps Heritage Brian Johnson.  Johnson managed to stay in the Majors for the entire season in 2018, but he will have to improve if he is going to stick with the team long-term.

So that's it for now.  I don't have much yet to receive, so it may be a few more weeks before I return full-time.  Still working on a big appeal.
Posted by Metallattorney at 9:38 PM No comments: