Mookie and the Oddballs

Dibs on the band name. 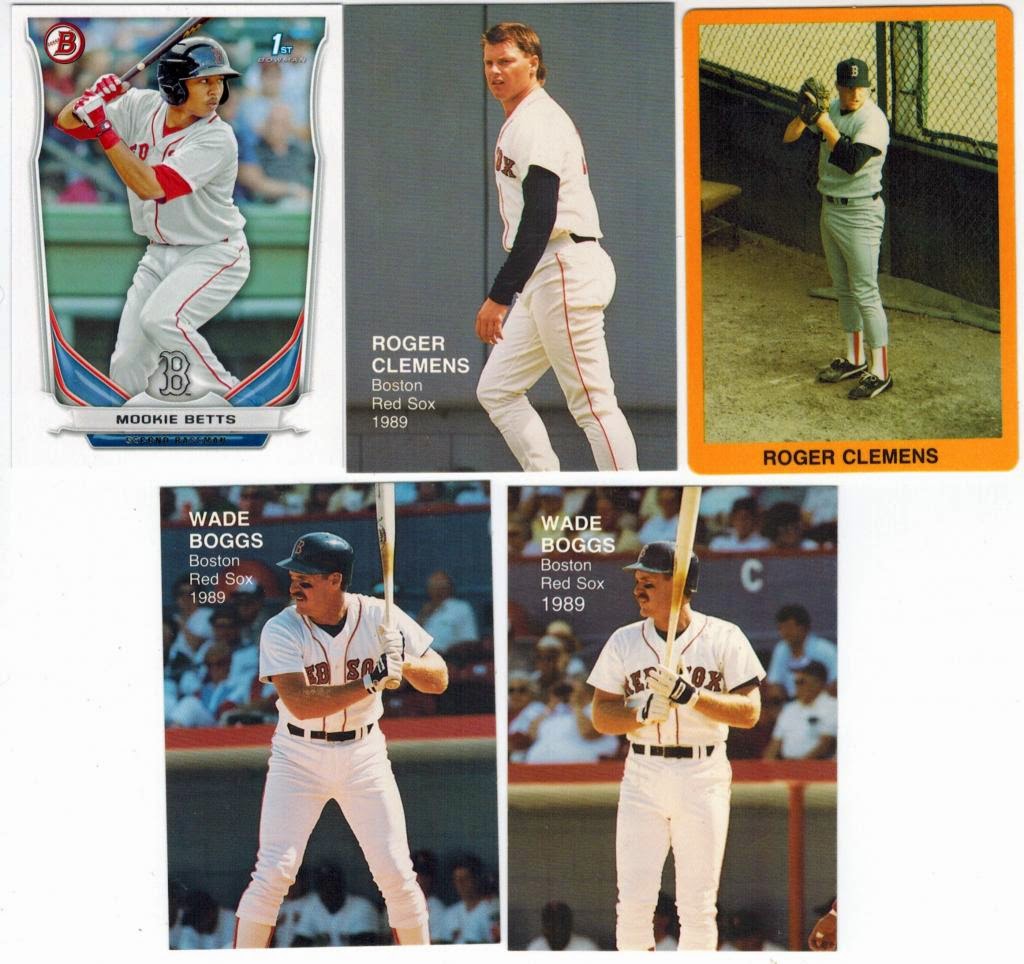 5.  1989 Baseball's Finest Stars Wade Boggs.  I get the impression there are billions of these things out there.
Posted by Metallattorney at 11:00 PM 2 comments:

One of my favorite bloggers to trade with is Zippy Zappy of Cervin' Up Cards.  I recently sent him a Hiroki Kuroda card, so he sent me one of his customized packs in response. 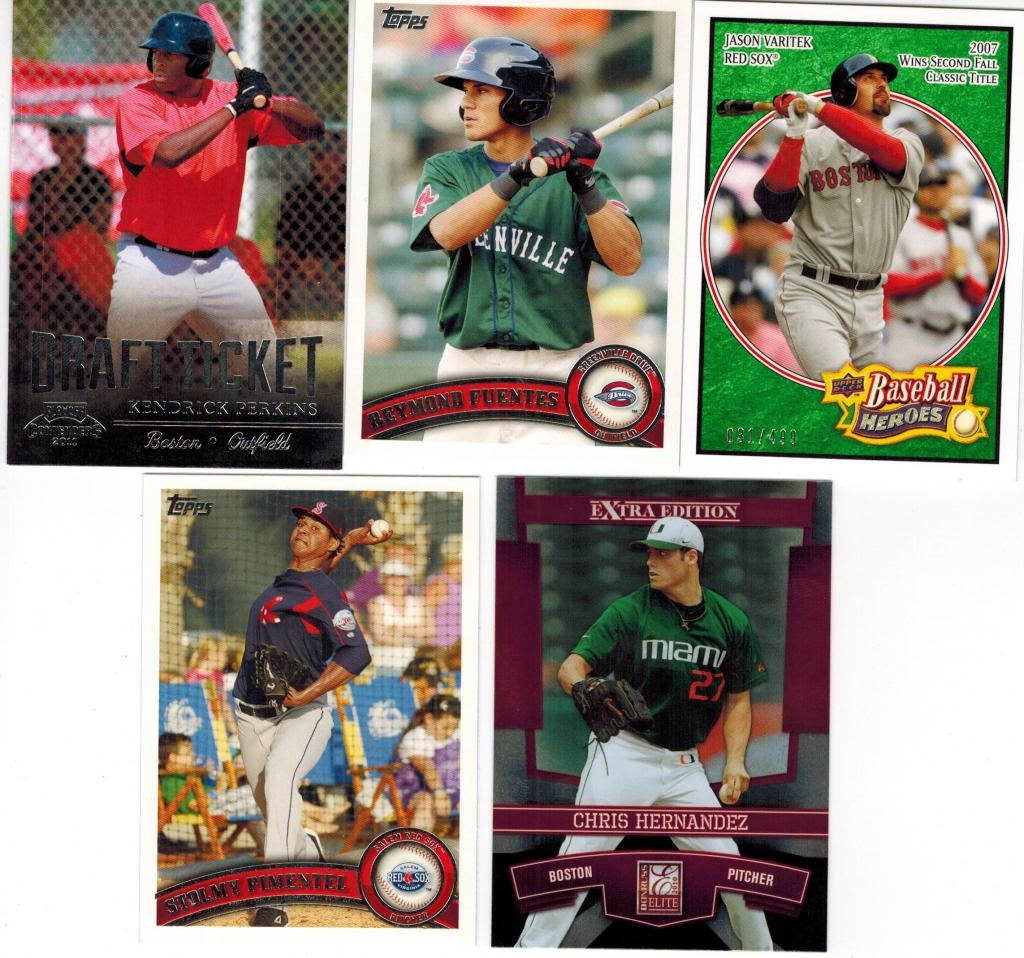 1.  2011 Playoff Contenders Draft Ticket Kendall Perkins.  Perkins is finally starting to put it together, of course he is 22 and in Single A still so he should be getting it by now.

2.  2011 Topps Minors Reymond Fuentes.  Fuentes was Boston's first round draft pick in 2009 and was traded to San Diego in the Adrian Gonzalez trade.  He has made it to the Majors briefly in 2013.

3.  2008 Upper Deck Baseball Heroes Green Jason Varitek.  Unfortunately I already had this one.

4.  2011 Topps Minors Stolmy Pimentel.  Pimentel was traded to Pittsburgh in the Joel Hanrahan trade and has made it to the Majors as well.

5.  2008 Elite Extra Edition Chris Hernandez.  Unfortunately I already had this one as well.  Hernandez has been a capable relief arm in Pawtucket and could get a call-up to Boston soon.

Thanks Kenny!
Posted by Metallattorney at 11:16 PM No comments:

He's been struggling lately but Xander Bogaerts is one of the few players who have been exciting to watch for Boston this season.  He will turn things around with his bat soon I would imagine.  He has had these issues each year in the minor leagues as well.  Recently I have worked out a couple of trades to bring in a couple of nice Xanders. 1.  2014 Donruss Rookies Xander Bogaerts.  The insert set from 2014 Donruss features a design similar to the 1988 set, which was not one of my favorite Donruss designs personally.

2.  2014 Topps Gypsy Queen Mini Red Xander Bogaerts.  I had to give up a little bit to get this one, but I think it is well worth it.  Nice photography on this one.
Posted by Metallattorney at 2:25 AM No comments:

Oddball Mailday and Some Topps Series 2

I love getting oddballs.  There is just something that draws me to the cards that are not in the mainstream.  My music tastes are the same, being a metal-head.  I love food issues most of all.  I mostly missed the days where there were cards in a bunch of food products, I had the occasional Tombstone or cereal card.  But those days were mostly over by the time I was collecting.

Recently I found a member on the forums who had recently bought a huge box of oddball cards.  I asked for a list of Red Sox (and Sandy Alomars) and picked and chose what I wanted.  He had a bunch of the Pepsi cards from 1990 and 1991 which are Red Sox-only sets that I have been chasing for awhile.  They are hard to find and the Carlos Quintana was my #2 most sought after card.  Here we go: 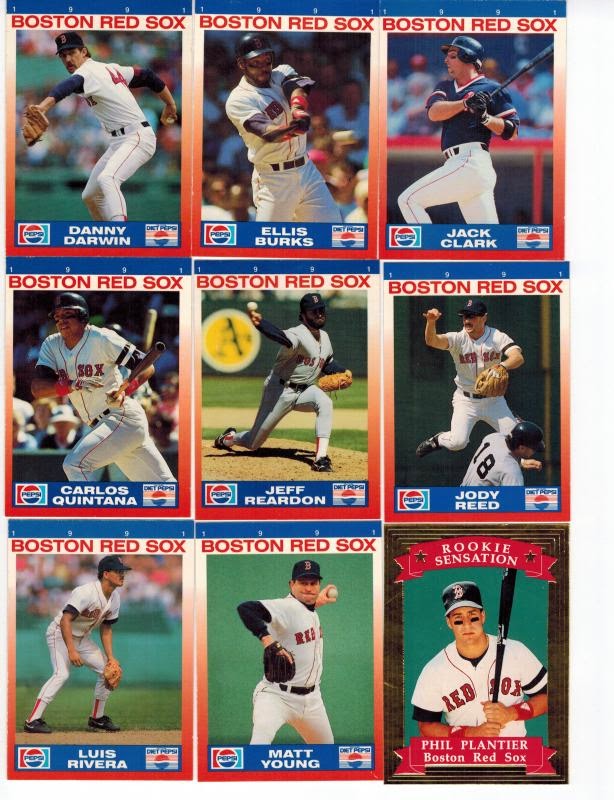 1.  1991 Pepsi Danny Darwin.  I have mentioned before that Darwin had an incredible, underrated season in 1993.  He had the best year on the team that year, a year in which Boston had Roger Clemens, Mo Vaughn, Andre Dawson, and John Valentin.

3.  1991 Pepsi Jack Clark.  Clark was signed in 1991 to be a big power hitter for the Red Sox as a right-handed power bat.  He did lead the team in home runs and RBIs that year but his numbers were not what was expected and he was terrible in 1992.

5.  1991 Pepsi Jeff Reardon.  One of the earliest Red Sox career highlights I remember was Jeff Reardon setting the saves record in 1991 when he saved his 342nd game, passing Rollie Fingers.  He did not hold the record long and he has passed by a number of people since then, so many that 342 looks quaint now, but it was a pretty big deal at the time.

6.  1991 Pepsi Jody Reed.  A great action shot of a pretty decent player.  Reed was another underrated, valuable performer in the early 1990's.

7.  1991 Pepsi Luis Rivera.  I have no idea how Rivera kept his job for so long.  He was the starting shortstop for four seasons.  He could not hit, despite having a little bit of power, and he wasn't an elite fielder.  The best I can figure is that Boston could not bring in anyone to replace him.

8.  1991 Pepsi Matt Young.  This was a huge free agent bust for Boston.  He even pitched a no hitter and lost, though it was later ruled not a no hitter because he did not go the full nine innings.

9.  1991 AAMER Sports Rookie Sensation Phil Plantier.  I have no idea what this card is.  Plantier was one of the single most-hyped players I remember in those days.  Unfortunately he did not develop in Boston then was traded in a horrible trade to the Padres for Jose Melendez where he did have a good year in 1993. 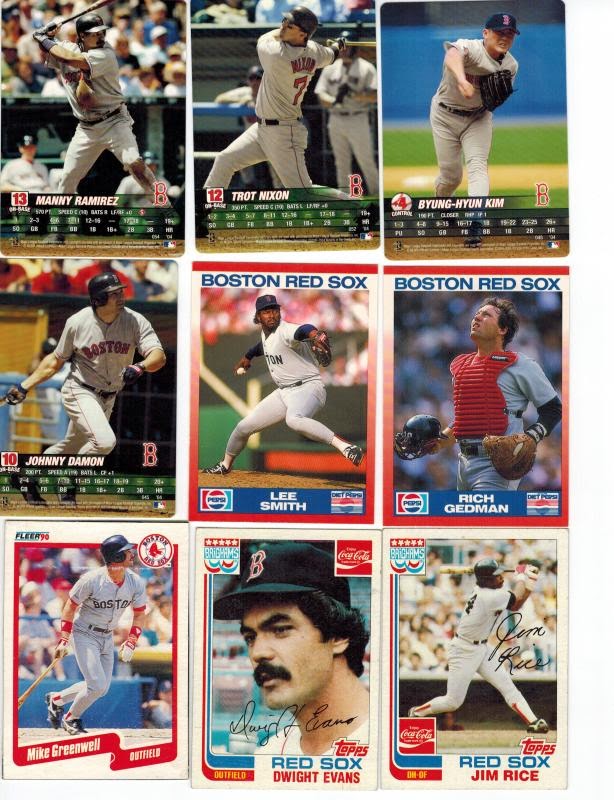 10.  2004 MLB Showdown Manny Ramirez.  I don't really get a lot of Manny cards these days.  I have a ton of them already and I am a bit disappointed with the PED issue.  But I feel like he was never really a big focus anyway.  I just never really responded well to him for some reason.

11.  2004 MLB Showdown Trot Nixon.  Nixon honestly did not live up to what he was supposed to be, but he was still a very good player for a few years.  Injuries and the inability to hit left-handers did him in.  But it was his gritty style of play caught on for years.

12.  2004 MLB Showdown Byung-Hyun Kim.  I liked his delivery more than him.  Kim kind of struggled a bit during his time with Boston and then was traded to Colorado for Charles Johnson who was promptly released.

13.  2004 MLB Showdown Johnny Damon.  At one point there was some talk about Damon being a borderline Hall of Famer.  I really do not see it.  He had some nice years, but I don't think he was ever one of the best players in the league.

15.  1990 Pepsi Rich Gedman.  Gedman's time in Boston in 1990 was also limited as he had been injury-plagued and bad for a few years and had been replaced by Tony Pena with the former first round draft pick John Marzano also ready.

17.  1982 Brigham's Coca Cola Dwight Evans.  I still think Evans belongs in the Hall of Fame.  I can't believe he was not even on the Veteran's Ballot last year.

18.  1982 Brigham's Coca Cola Jim Rice.  The last player to make it into the Hall of Fame with the Red Sox, he will likely be joined by Pedro Martinez next year. 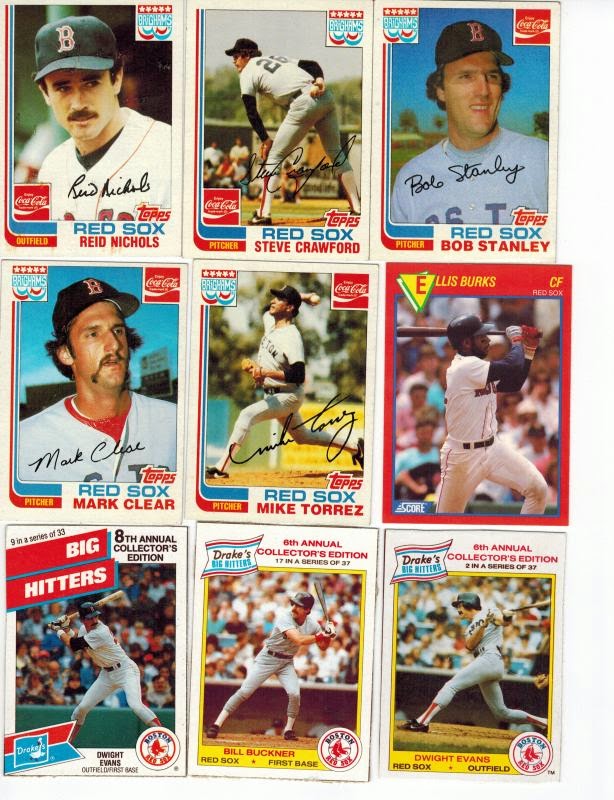 22.  1982 Brigham's Coca Cola Mark Clear.  Clear was another good reliever who paired with Stanley to have great seasons in 1982.

23.  1982 Brigham's Coca Cola Mike Torrez.  Torrez gave up the infamous homer to Bucky Bleepin' Dent in the 1978 one-game playoff.  He was never quite as good after that.

25.  1988 Drake's Big Hitters Dwight Evans.  I don't even know what Drake's was.  It may have been a regional thing we did not get in Nebraska.  But I have a bunch of the cards. 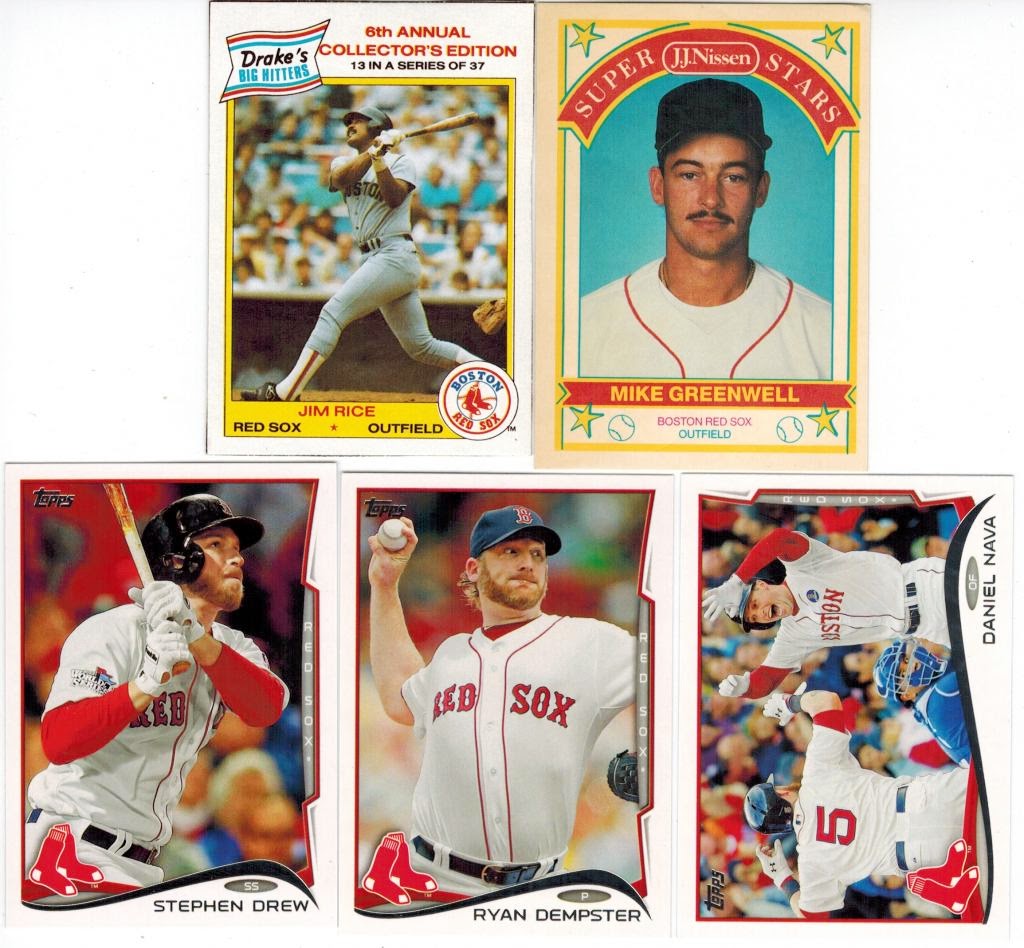 Finally, I bought my first blaster of 2014 Topps Series 2.  I got a few new Red Sox, but I have continued to be unlucky with inserts and parallels.  Just some base cards.

31.  2014 Topps Ryan Dempster.  Dempster decided to take this year off for reasons I am not clear on.

32.  2014 Topps Daniel Nava.  Nice photo.  Nava is unfortunately not having a good year.  The part of Daniel Nava 2013 is currently being played by Brock Holt.
Posted by Metallattorney at 11:51 AM 2 comments:

It's because he's camouflaged: 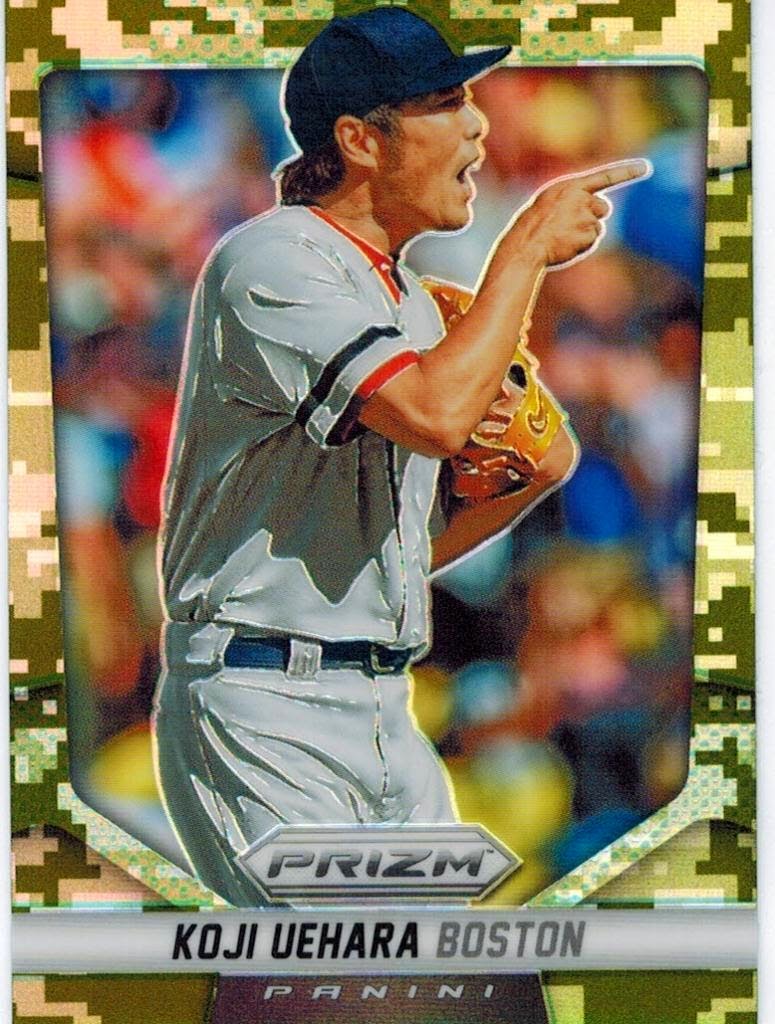 1.  2014 Panini Prizm Camo Refractor Koji Uehara.  I got this in a one for one trade for a Brewers camo refractor.   I personally much prefer the Koji.

Posted by Metallattorney at 10:23 PM 2 comments:

One of the brightest prospects in baseball right now is Boston's Mookie Betts.  He has been on fire for the last couple of seasons.  Luckily card companies have started to notice.  I got this one recently in a trade: 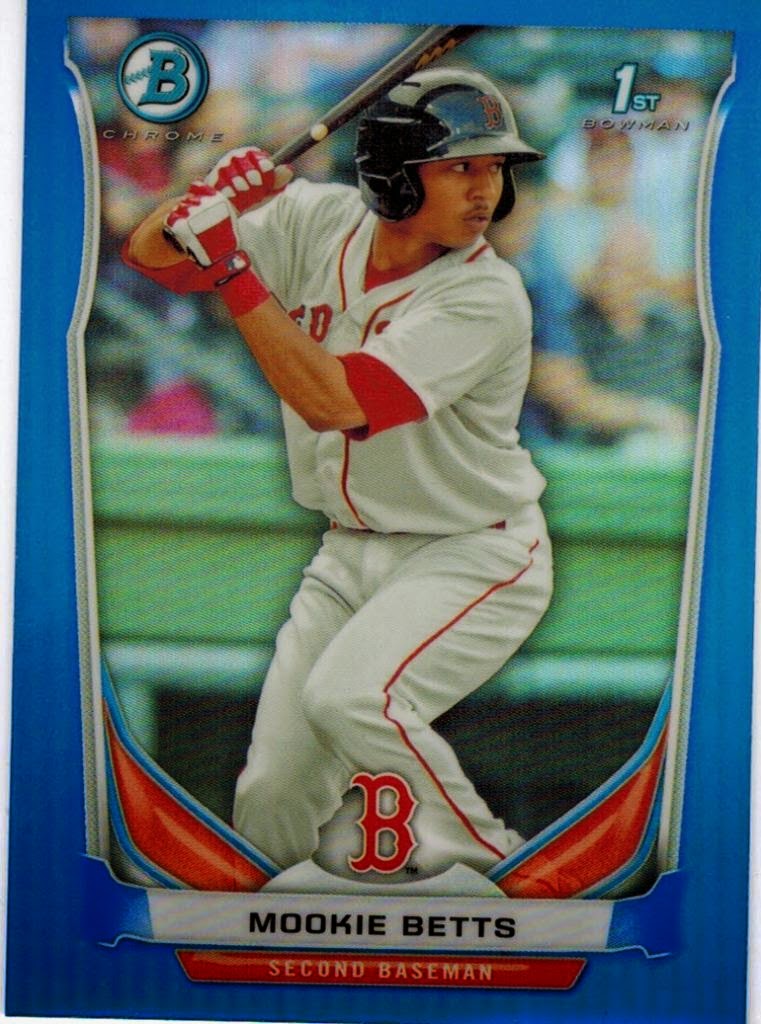 2014 Bowman Chrome Prospects Blue Refractor Mookie Betts.  This is now my third Mookie Betts card, with another one on the way soon.  Betts could get his call-up later this season, particularly if the outfield keeps underperforming.
Posted by Metallattorney at 4:16 PM No comments:

A Babe, a Petey, and a Cecchini

I really like the Topps trophy cards but they are very hard to come by for me.  I have not been wanting to spend much money lately, and I rarely have enough in trade to entice people that have them.  But when I saw this one, I knew I had to try for it: 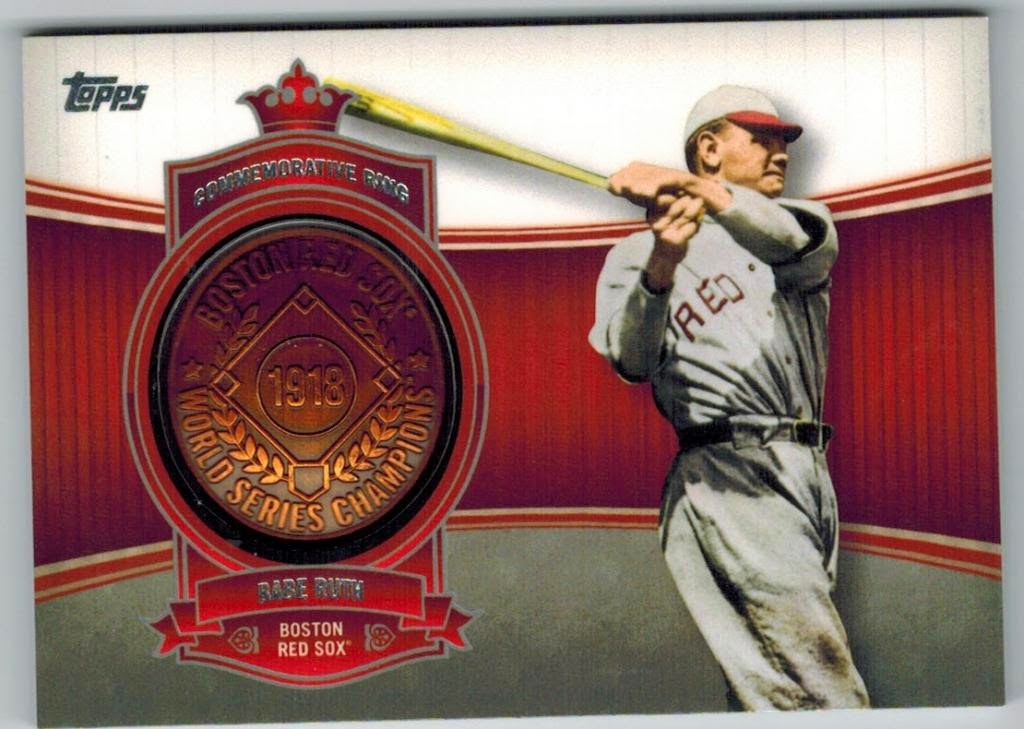 1.  2012 Topps Babe Ruth Commemorative Rings Babe Ruth.  I can not tell if the picture is photoshopped or not, I don't really care.  This is a terrific looking card and just my second Red Sox trophy card.

I picked up another Prizm blaster which got me one card, and then I received a one-card trade package here: 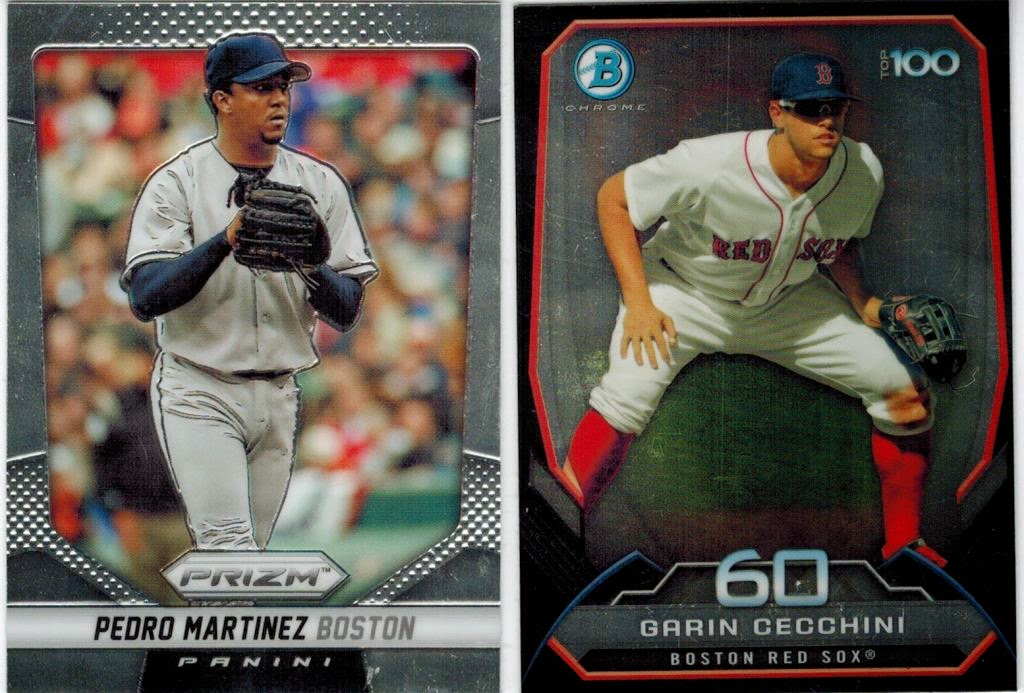 2.  2014 Panini Prizm Pedro Martinez.  Pedro is starting to show up quite a bit again lately.

3.  2014 Bowman Chrome Top 100 Garin Cecchini.  You may have missed that he made his Major League debut on Sunday and doubled, then was sent back down to the minors for Stephen Drew to be activated.
Posted by Metallattorney at 7:58 PM 1 comment:

Don Zimmer was the Red Sox manager from 1976 through 1980.  While he was not the most successful of managers in that time, he was certainly memorable.  He of course had some problems with certain players on the Red Sox team, most notably Bill Lee and Ferguson Jenkins.  Zimmer came back and was a coach for the Red Sox in 1992.  I remember him mostly as a Yankees bench coach, in particular the incident with Pedro Martinez in 2003.  Unfortunately, Zimmer died yesterday.  He was an interesting character and baseball will miss him. 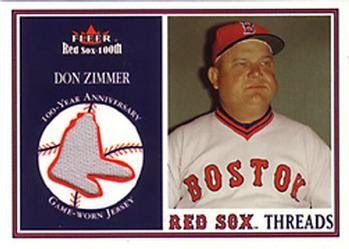