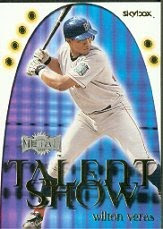 WILTON VERAS
Wilton Veras was supposed to be one of the top prospects that Dan Duquette developed. It just did not work out that way. The third baseman had power potential, could hit for a decent average, and played decent defense. At least he did in the minors.

But Veras never could make the Major Leagues for long. He spent parts of two seasons in Boston and compiled a slash line of .262/.297/.340/.637. He hit two home runs and drove in 27. He also struck out 34 times and only walked 12 times in 294 plate appearances. It was this poor strike zone judgment that ultimately cost Veras a career.

Veras jumped from AA to the Majors. He could not cut it in the Majors so he was sent to AAA to get more seasoning but he was never able to develop there either. He was out of professional baseball after the 2003 season.
Posted by Metallattorney at 8:43 PM