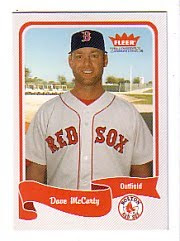 The next year, McCarty began working on pitching. He pitched a few innings during Spring Training and made the team as a pitcher/backup first-baseman. He pitched left-handed so his versatility was highly valued. He hit .258/.327/.404/.731 in 89 games with four home runs. He also pitched in three games, going 3.2 innings with four strikeouts and one earned run. His ERA was 2.45. Despite the relative success, that was the only experiment with McCarty as a pitcher.