2001 was not a great year for the Red Sox.  It started promisingly enough.  Before the season Boston signed Manny Ramirez to a massive eight-year contract with two option seasons.  Unfortunately, Nomar Garciaparra was hurt before the season due to an injury he sustained after being hit by a pitch on the wrist.  Nomar was out for all but 21 games.  Pedro Martinez would also go down with an injury early on, come back, then go back down.  Jason Varitek was lost to a season-ending elbow injury in June.  Despite all of that, Boston was playing well until completely folding in the second half, culminating in the firing of Jimy Williams and the hiring of Joe Kerrigan as manager.  There were not a ton of players to wear a Red Sox uniform who did not appear on a piece of cardboard for them. 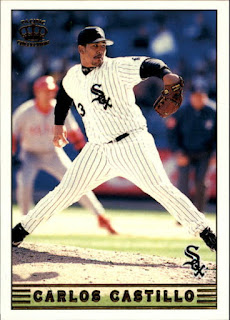 A former third-round draft pick of the White Sox in 1994, Castillo spent a few seasons with Chicago as a reliever.  He was at his best in 1998 when he appeared in 54 games and had a 6-4 record.  Castillo was never a closer, but more of a long man out of the pen.  Castillo was released by the White Sox before the 2000 season and was picked up by the Marlins, though he never appeared for them.  He was picked up by the Red Sox in June, but spent most of his stint in the Boston organization in the minors.  He finally made an appearance with Boston in 2001, but appeared in just two games.  He pitched three innings and gave up two runs for a 6.00 ERA.  He was released in September.  Castillo does appear in a minor league set with the Red Sox. 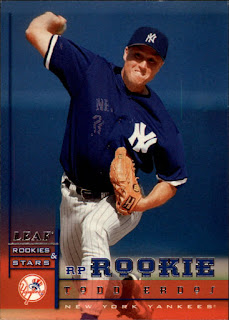 Boston tried out a ton of bullpen options over the course of the 2001 season, and a lot of them did not pan out, obviously.  Todd Erdos pitched in 36 games for the Yankees and Padres during the 2000 season with a high ERA.  It is fairly surprising then that he was given another opportunity, but Boston picked him up before the 2001 season.  He spent most of the season in Pawtucket and pitched surprisingly well.  For that he was given a chance out of the Red Sox bullpen and he made it into 10 games down the stretch.  He pitched 16.1 innings with a 4.96 ERA, striking out seven while walking eight.  He was back in the Red Sox minor league system in 2002 and then bounced from organization to organization, never making it back to the Majors.  Erdos also appears in a Red Sox minor league set. 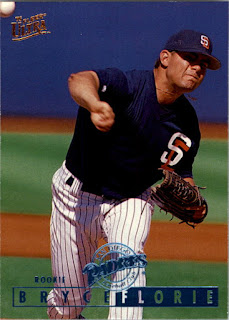 Bryce Florie was in his third season with the Red Sox, and still, no Red Sox cards.  Florie was coming off of his serious injury after taking a line drive to the face.  Florie made it into just seven games with the Red Sox in 2001, giving up 11 runs in 8.2 innings.  He struck out seven, but also walked seven.  He was released in July and was picked up by the Tigers, the team that traded him to Boston.  He never made it back to the Majors but did spend a few more seasons bouncing around from organization to organization. 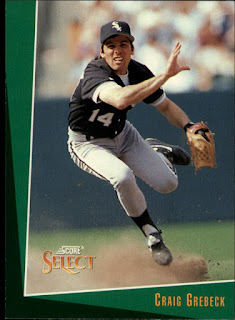 "The Little Hurt", a nickname given Grebeck by White Sox announcer Ken Harrelson, had been a longtime ChiSox middle infielder.  He was a decent contact hitter and walked quite a bit.  Combined with his impressive defense, Grebeck should have been given more chances for a starting spot.  But the White Sox had Ozzie Guillen and Joey Cora in the middle of their infield for most of Grebeck's tenure.  After leaving Chicago, Grebeck jumped from team to team.  He was brought to Boston in 2001 at the beginning of the season to cover for Nomar Garciaparra's injury.  He had just hit .294 the previous season with Toronto.  Unfortunately, Grebeck was washed up as a Major Leaguer.  Through 23 games and 43 at-bats, Grebeck only had two hits.  He scored a run, doubled, and drove in two runs, but ended up with an ugly line of .049/.093/.073.  That was it for Grebeck's career. 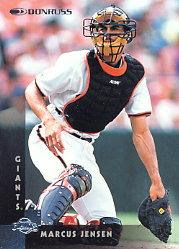 Marcus Jensen appeared in just one game for the Red Sox.  The catcher rarely even rose to the level of a backup catcher throughout his career.  He appeared in more than fifty games just once in his career, in 2000 with the Twins.  Jensen played for seven teams over the course of his seven years in the Majors.  Boston had some catching problems in 2001.  Starter Jason Varitek suffered a season-ending elbow injury in June and backup Scott Hatteberg could not throw well enough to be a starting catcher.  The Red Sox eventually solved their problem by trading for Doug Mirabelli but before doing that, they tried out Jensen in early June.  Jensen played the whole game and hit a single in four at-bats.  He was given the unenviable task of catching Tim Wakefield in that one game.  He was waived by Boston shortly thereafter and picked up by Texas, for whom he played 11 games.  Jensen does appear in a Red Sox minor league set. 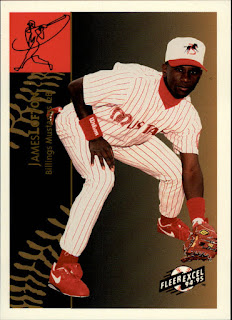 Nomar Garciaparra's injury had Boston scrambling to find a shortstop all season.  Craig Grebeck, John Valentin, and Lou Merloni all struggled in the spot.  Mike Lansing started the most games at the position.  Nomar came back very briefly, only to go back on the shelf.  James Lofton, no relation to Kenny, was given a chance late in the season and played in seven games.  Lofton batted .192/.214/.231 with a double out of five hits in 28 plate appearances.  He did steal two bases.  Lofton never had a Major League card of any type, of course he only appeared in the Majors with the Red Sox in 2001.  He does have a minor league card with the Red Sox organization. 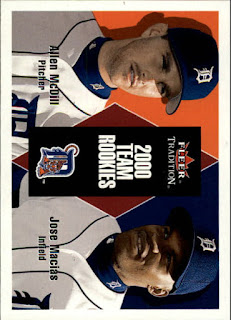 Another relief pitcher given a brief tryout by the Red Sox was Allen McDill, who had never pitched in more than 13 games at the Major League level prior to 2001.  He had just 23 games over the course of three out of the previous four seasons and had pitched for the Royals and the Tigers.  The southpaw appeared in 15 games for the Red Sox from late August to the end of the season.  He actually had decent strikeout numbers, striking out 16 versus just seven walks in 14.2 innings.  Unfortunately, his ERA was an unimpressive 5.52 on the season.  Naturally he was better served pitching only against left-handed batters.  He bounced around from organization to organization after his appearance in Boston but never appeared in the Majors again.  McDill is another player that does appear in a minor league set for the Red Sox. 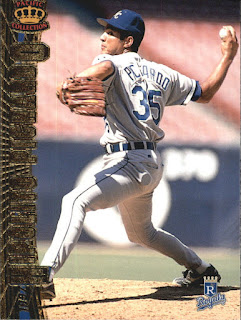 After a successful first season in the Boston bullpen in 2000, the longtime Royals reliever Pichardo was brought back to be a major piece in Boston's bullpen in 2001.  Unfortunately he was not nearly as successful.  Pichardo pitched in almost as many games, but only slightly more than half as many innings.  His ERA was a less impressive 4.93 and he had a 2-1 record.  Most of his rate stats were slightly worse in 2001 than they were in 2000 as well.  Pichardo was injured in August and did not make it back to Boston.  He signed as a free agent with Houston the next season but only appeared in one game, pitching just one-third of an inning.  Annoyingly, Pichardo has an Astros card from the Upper Deck 40 Man set, but no Red Sox cards despite appearing in 68 games for Boston over two full seasons. 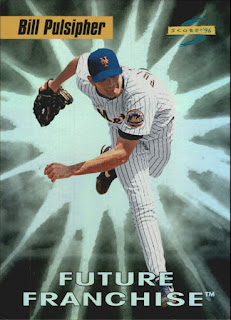 At one time Bill Pulsipher was part of a trio of great young pitching prospects for the Mets.  They were all supremely talented and heavily hyped.  Unfortunately, none of the trio, which included Jason Isringhausen and Paul Wilson, quite lived up to their expectations.  Isringhausen had some very good years out of the bullpen for the Athletics and Cardinals.  After several years of being tried out as a starter with the Mets and Brewers, the Red Sox attempted to use Pulsipher out of the bullpen.  He pitched in 23 games for the Red Sox in 2001, exclusively in relief.  His ERA was a disappointing 5.32 but he did exhibit some signs of becoming a decent reliever.  The lefty pitched in 22 innings over those 23 games with no record and 16 strikeouts versus 14 walks.  In August, Boston gave up on the experiment and placed him on waivers.  The White Sox picked him up and he finished the season in Chicago.  He did not appear in the Majors again until 2005 with the Cardinals, ironically reuniting with Isringhausen.  Pulsipher somehow has a card with the Devil Rays, despite never appearing in a Major League game with them, but none with the Red Sox.  Pulsipher does have minor league cards for the Red Sox organization.

As mentioned before, there are not a lot of 2001 Red Sox with no cards.  There really are not any glaring omissions.  Hipolito Pichardo pitched in the most games with Bill Pulsipher not too far behind him.  Craig Grebeck appeared the most amongst the position players, but nobody appeared in more than 30 games.  Bryce Florie and Pichardo had both been in Boston the previous season.  If I had to pick one player I would have liked to have seen get a card, it would probably be Grebeck.  He had an interesting career and was actually expected to help out after a pretty decent season with the Blue Jays the year before.  Grebeck also played in the no-hitter pitched by Hideo Nomo.
Posted by Metallattorney at 12:00 AM