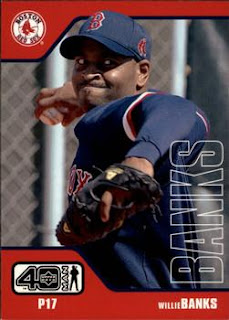 I have mentioned before how much I loved Upper Deck 40 Man.  Without it, we would never have a Red Sox card of players like Willie Banks here.  This was right at the time when very few sets were concerned about player selection.  There were a few larger sets such as Topps, Topps Heritage, and Fleer Tradition that had a bunch of cards for each teams, but unless the player was a regular or a rookie, they were not getting a card.  So, middle relievers, backup catchers, utility infielders, and short-term callups were left out in the cold.  That always bothered me because I have always liked getting a variety of players.

That brings us to Banks here.  Willie Banks was a top prospect for the Twins in the early 1990's and was a part of the Twins World Championship team in 1991, though he did not play in the postseason.  Banks had his first full-time season in 1993 and went 11-12 with a 4.04 ERA.  The next year, he was traded to the Cubs and was 8-12 with a 5.40 ERA in the strike-shortened season.  After that however, his career stalled.  He bounced from team to team for several years but never played more than 10 games until 1998.    That year, he found full-time work in Arizona's bullpen.

The next year, Banks found himself in Japan briefly before returning to the U.S.  He did not make it back to the Major Leagues until 2001 when he re-emerged briefly in Boston's bullpen.  He made it into five games late in the season with a 0.84 ERA and 10 strikeouts in 10.2 innings.  That showing was impressive enough to get him to stay in Boston for the majority of the 2002 season.  Banks was an important member of the bullpen that season, pitching in 29 games with a 2-1 record and a 3.23 ERA.  He picked up one save in a 22-4 drubbing of the Rays in which he pitched the last four innings of the game, giving up just two hits and no runs.  He was released during Spring Training of 2003 and never made it back to the Majors.

Banks had a brief stint with the Red Sox, but he was a major bullpen contributor in 2002.  If it were not for 40 Man, he would not have any cards with the Red Sox.
Posted by Metallattorney at 10:15 PM