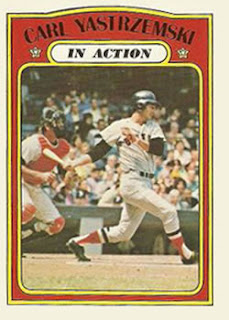 When compiling a list of the best players in Red Sox history, Carl Yastrzemski's name most likely comes up second only to Ted Williams.  There is a good reason for that, Yastrzemski's hitting numbers may not have been quite as impressive, but he was an incredible hitter in his own right and his career lasted longer than any other player in a Red Sox uniform, covering 23 full seasons and 3,308 games.

Yaz came up the season after Ted Williams retired from baseball and took over Williams's position in left field.  Though there were seasons in which he played other positions (center field, first base, designated hitter), he will likely be remembered as a left fielder more than anything else.  He was the second link in the chain of three Hall of Famers to patrol left field for the Red Sox from 1939 through 1989.

Carl Yastrzemski was not an immediate success.  He was good, but not great for the first season of his career, gradually developing into a better and better hitter.  Then, in 1963, he won his first batting title and his first Gold Glove, while also smacking 40 doubles.  He led the league in batting average, doubles, hits, and walks and was named an All Star for the first time.  He hit 20 home runs for the first time in 1965.

Then, in 1967, Yaz had the greatest season of his career, and quite possibly the greatest season of any Red Sox player ever.  In WAR, it certainly is a record, a 12.4 WAR season.  He won the Triple Crown, en route to the AL MVP and the Gold Glove in the Impossible Dream Red Sox season.  What is even better is that he was an incredible clutch hitting machine, having a terrific final couple of weeks of the season and continuing that magic stretch through the World Series by hitting .400 with three home runs.  It was an incredible offensive season and the greatest moment in a terrific career.

The next season, he again won the batting title, though with just a .301 mark, the lowest batting average to ever win the batting title in the Year of the Pitcher.  His other numbers took a tumble too, but he still had a decent season.  The next two seasons, Yaz hit 40 home runs each year.  After that point, Yaz was no longer a top offensive player, but he would still be a productive hitter and a stalwart of the Red Sox offense.

Yaz started shifting around the diamond and gradually became the starting first baseman in the 1975 pennant winning season.  Yaz had a subpar season for him but turned it on again in the World Series.  His power numbers increased the next couple of seasons as he led a powerful Red Sox offense.

During the 1980 season, Yaz collected his 3,000th hit.  He is the only Red Sox player to have 3,000 hits all with this franchise.  Yastrzemski completed his career in 1983.  He spent his entire career with the Red Sox, setting franchise records for hits, games, runs, runs batted in, and extra base hits.  He was elected to the Hall of Fame on his first ballot in 1989.
Posted by Metallattorney at 8:00 AM