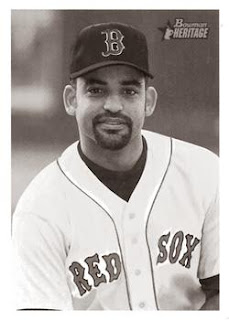 Quilvio Veras?  Yep, Quilvio Veras.  But, don't go poring over his career statistics looking for how he did in Boston.  You will not find anything.  Veras never played a single game with the Boston Red Sox.

Veras began his career with the Florida Marlins and led the league in stolen bases in his rookie season.  After a disappointing season in 1996, he was traded to the Padres where he continued to hit for a reasonable batting average while stealing a bunch of bases from the leadoff position.  After three seasons with the Padres, he was traded again to the Braves.  He spent about a season and a half in Atlanta where he was plagued by injuries.  He was released by the Braves in early August of 2001.

Shortly after his release, Veras was snatched up by the Red Sox and continued to rehab.  He ended up playing three games in Pawtucket and never saw action with the big league club.  He was allowed to leave as a free agent to the Dodgers after the season, but never saw Major League action again.
Posted by Metallattorney at 2:00 AM

Email ThisBlogThis!Share to TwitterShare to FacebookShare to Pinterest
Labels: one card wonder, veras