It's About Damn Time

Three cards arrived in my mail box today.  For those that don't know, I get my cards mailed to my office address so I get stuff right away in the morning, instead of having to wait until I get home at night.  That way it can be a nice pick-me-up before heading into work.  Today, I received three cards, but one in particular was a card I had been eagerly anticipating for quite some time.

Up first was a one-card trade that brought me a pink refractor of Brian Johnson who, to this point, has only pitched one game for the Red Sox: 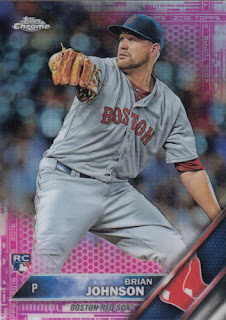 Johnson has dealt with some hardships this year.  He was car-jacked at gunpoint last October and has been dealing with anxiety issues stemming from the incident.  He has been pitching well of late and a return to the Majors could be in the cards in the near future.

Up next is a Topps Now card commemorating Mookie Betts and Daniel Murphy being named their league's respective Players of the Month Awards: 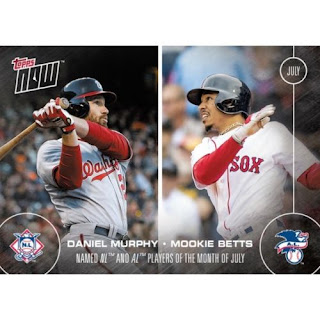 Mookie has emerged as a potential MVP candidate as he has made it to 30 home runs and is closing in on 100 RBIs.  He also plays terrific defense and has 21 stolen bases.  Betts is a five-tool player.

And finally, the card I am very excited about: 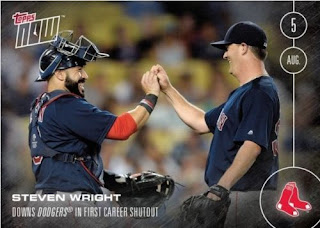 This is the very first card of Steven Wright with the Red Sox.  Wright was initially acquired in a minor trade with the Indians for Lars Anderson in 2012 and made his Major League debut with the Red Sox in 2013.  He has pitched in 49 games to date in the Majors over the past four years, and yet, this is his very first card of him with the Red Sox.  The knuckleballer has been extremely impressive this season, being named to the All Star Game and winning 13 games to date.  He also pitched this complete game shutout of the Dodgers.  I expect Wright to be in Topps Update later this year, and you can bet I will be seeking out every single card of him.  He is one of my favorite stories of the season.
Posted by Metallattorney at 2:00 AM