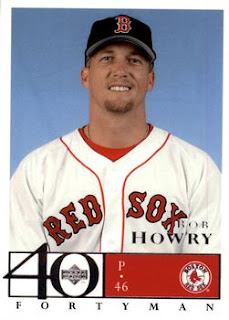 Like Willie Banks, Bob Howry is a reliever who would not have a Red Sox card were it not for Upper Deck 40 Man.  Howry had been the White Sox closer in 1999, saving 28 games as a 25 year old in his second season.  Despite this, he did not return to that role.  Maybe some White Sox fans have a better idea of what happened with that.

In 2002, Howry was traded to the Red Sox at the trading deadline for minor league pitchers Byeong-Hak An and Frank Francisco.  Francisco would go on to a 10 year Major League career, mostly with the Rangers.  He was a closer for a few seasons himself.  Howry was expected to help out in the bullpen, but he ended up 1-3 with a 5.00 ERA.  He did have 14 strikeouts as compared to just 4 walks in 18 innings, but he was definitely not the bullpen savior Boston had hoped for.

In 2003, Howry was one of the players expected to fill out the disastrous bullpen-by-committee experiment at the beginning of the year.  But after four bad outings in which he blew a save on April 1 and had a 12.46 ERA before being hurt.  He did not make it back to the Majors with the Red Sox.

Howry's career continued for several seasons with five more teams.  He never had a chance to close again but he did not have a few productive seasons, particularly with the Cubs.
Posted by Metallattorney at 7:37 PM

Email ThisBlogThis!Share to TwitterShare to FacebookShare to Pinterest
Labels: howry, one card wonder