In this series, I will look at my first team set: 1991 Topps. This was the set I started my baseball card collection with. 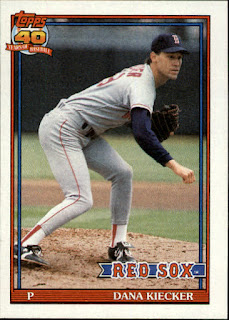 One of the strengths of the 1990 Red Sox team was the pitching staff, which helped lead Boston to the AL East division title.  Roger Clemens and Mike Boddicker came into the season as the clear favorites to lead off the rotation, but after those two, it was not settled who would make up the rest of the starters.  But Boston lucked out and benefited from surprisingly strong seasons by Greg Harris, Tom Bolton, and Dana Kiecker.

Kiecker was the biggest surprise as the 1983 8th round draft pick was 29 years old in 1990 and had never played in the Majors.  He made his Major League debut on April 12 out of the bullpen and pitched four innings.  By mid-May, Kiecker had stepped into the starting rotation and he stayed there for the better part of the season.  He finished the year 8-9 with a 3.97 ERA, solid numbers for a back of the rotation starter.  He struck out 93 and walked 54 in 152 innings.

Kiecker started one game in the ALCS against the Athletics, pitching 5.2 innings in Game 2, giving up just one earned run.  He struck out two and walked one.  Unfortunately the bullpen gave up the tie-breaking runs and the Red Sox lost.  They were swept in the ALCS.

1991 was Kiecker's second, and final, season in the Major Leagues.  Injuries and ineffectiveness ended his career just as quickly as he started.

This Dana Kiecker card was my third Red Sox card, ever.  It came in the second pack of cards I ever bought.  My first pack included both Dennis Lamp and Tom Bolton.
Posted by Metallattorney at 8:00 AM