2000 saw more of the same from card companies.  Smaller sets, with very few exceptions.  Unless you were a regular player, you were not likely to get a card.  Boston had a number of veteran players with long histories show up very briefly in 2000.  Many of those players did not appear in a Red Sox uniform on cardboard. 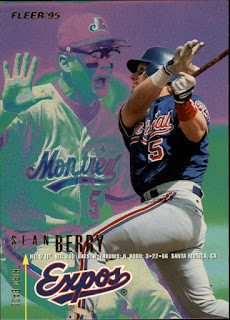 Boston might have been able to make it to the postseason in 2000 if it were not for the fact that they had virtually no production at all from the third base position.  The incumbent John Valentin played in just 10 games, top rookie prospect Wilton Veras was a bust, and the team was left with a number of retreads and never-weres like Lou Merloni, Manny Alexander, and Ed Sprague.  Sean Berry was another name on that list.  The former Expos and Astros third-baseman had had some good years in the past, but was basically done by 2000.  He started the season with the Brewers, but was not hitting and was released in June.  Boston picked him up to help with their third base problems, but he ended up playing in just one game for them.  In four at-bats he failed to get a hit and struck out twice.  He was released a couple of weeks later. 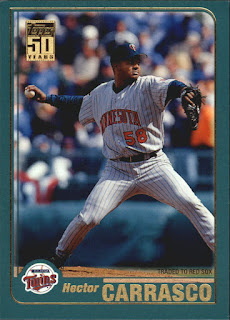 One of the most frustrating aspects of being a fan during the Dan Duquette regime was the fact that the team simply was not able to produce very many of its own players.  A lot of the reason for this is the fact that Duquette made so many trades involving a lot of prospects.  Duquette was not afraid to make deals when the team needed something.  The bullpen was a problem in 2000, so Duquette spent time trying to upgrade it.  One deal involved acquiring Hector Carrasco from the Twins.  To get him, Duquette gave up Lew Ford, a five tool player who would play five years for the Twins and was a pretty good player in 2004 when he hit 15 home runs and stole 20 bases.  Carrasco, on the other hand, pitched in just eight games for the Red Sox in 2000, going 1-1 with a 9.45 ERA.  He struck out seven in 6.2 innings, but also walked five.  After the season, he left as a free agent.  It is safe to say the Twins won that trade. 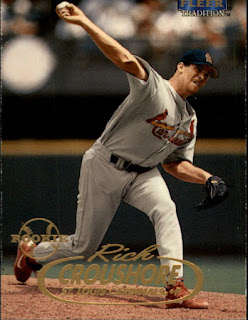 A very unpopular trade among the players in the clubhouse in 2000 was the trade of Jeff Frye, among others, to the Rockies.  Frye was a popular player to the team, and Nomar Garciaparra in particular was outraged.  That deal was mostly made in order to improve the team's pitching.  Along with Frye, Brian Rose and John Wasdin were shipped to the mountains in exchange for starting pitcher Rolando Arrojo, infielder Mike Lansing, and reliever Rich Croushore.  Croushore was more of a throw-in in the deal and only pitched in five games for the Red Sox.  He was 0-1 with a 5.79 ERA in five games.  He walked more than he struck out and was traded to the Mets before the 2001 season for Frank Graham. 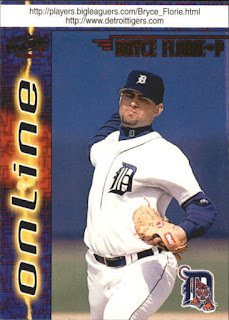 In his first full season with the Red Sox, after being acquired in a midseason trade from the Tigers in 1999, Florie had his career-defining moment.  Unfortunately that moment was being struck in the face with a line drive, causing multiple broken bones and eye damage.  Florie had been a fairly reliable bullpen arm until that moment.  He was 0-4 on the season with one save in 29 games.  He struck out 34 and walked 19 in 49.1 innings.  Florie had been a starter at times earlier in his career so he was often use for more than one inning in relief.  Florie is an annoying example of a player without any Red Sox cards because he spent parts of three seasons with Boston and appeared in 50 games and 88 innings. 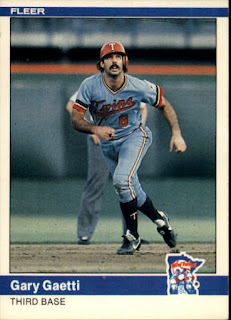 The longtime Minnesota Twins fan-favorite third-baseman was at the end of his career in 2000.  He had bounced around a little bit in previous seasons, from the Angels to the Royals to the Cardinals to the Cubs, but was still capable of hitting for some power.  Boston decided to bring him in as a right-handed platoon partner for Brian Daubach at designated hitter after an impressive Spring Training.  Unfortunately, it was pretty clear that Gaetti was done.  He started the season 0 for 10 with just one RBI and three strikeouts.  To his credit, Gaetti realized he was done.  He voluntarily retired after just five games. 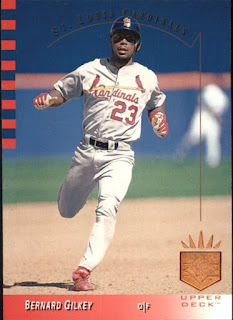 Another longtime star approaching the end of his career to show up in Boston in 2000 was Bernard Gilkey, who had some impressive seasons with the Cardinals and the Mets in the early to mid 1990's.  Gilkey had been released by the Diamondbacks in June of 2000 after a disappointing stint in which he hit just .110.  Boston gave him a shot and he made it into 36 games in the second half.  He hit .231/.327/.341 with a home run, five doubles, a triple, and nine RBIs.  Not bad numbers for a fourth outfielder, really, and he was acceptable in the field as well.  Gilkey played enough that he could have been included in an extended set, or in early sets from the next season.  He was let go as a free agent after the season and returned to the Cardinals, the team he started his career with before bouncing around.  He last appeared in the Majors with the Atlanta Braves. 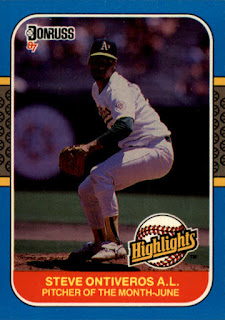 To say that Steve Ontiveros had an uneven career would be an understatement.  He made his Major League debut in the mid 1980's with the Oakland Athletics and looked to be a decent starting pitcher after winning 10 games in 1987.  Unfortunately injuries started to take their toll and he pitched in just a handful of games over the next three seasons.  He was out of baseball for the entire 1992 season due to injuries before re-emerging in Seattle in 1993.  He shockingly led the league in ERA and WHIP for Oakland in 1994, despite pitching in more games as a relief pitcher than a starter.  In 1995, he was an All Star, winning nine games for a bad Oakland team.  Then he spent four seasons in the minor leagues before showing back up in Boston late in the 2000 season.  He made one start, giving up six runs in just one inning, then pitched out of the bullpen for two more games.  He was 1-1 with a 10.13 ERA.  He pitched in the minors for two organizations the next season then retired. 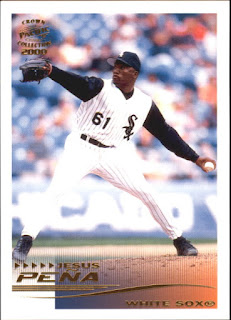 Left-handed relievers who throw hard are a valuable commodity.  It was with that in mind that the Red Sox executed a minor deal with the White Sox to acquire Pena despite a 5.40 ERA in 20 games and walking nearly as many hitters as he struck out.  Pena made it into just two games for the Red Sox in 2000, pitching three innings, walking three, and striking out just one.  His ERA was 3.00.  He spent the entire season in 2001 in Boston's minor league system but was not brought back to the Majors.  He bounced around for a couple of seasons after that, but his very brief stint in Boston was his last Major League action.  Pena does appear in a minor league set with the Red Sox. 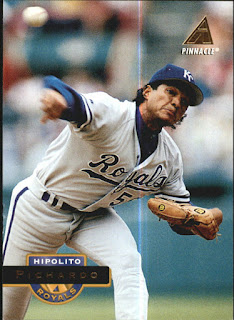 Like Bryce Florie, Hipolito Pichardo spent a large amount of time in Boston's bullpen in 2000.  He was tied for fifth-most games for a Boston pitcher in 2000 (38) and also started a game.  Pichardo had been a reasonably effective reliever for several seasons with the Kansas City Royals after arriving in the Majors as a starter at the age of 22 in 1992.  He was injured the entire 1999 season and sought to resurrect his career with the Red Sox in 2000.  He was largely successful, finishing with a record of 6-3, though he lost the game that he started.  His ERA was a very impressive 3.46 and he even picked up a save.  Pichardo returned to Boston in 2001, pitching in 30 games that season exclusively out of relief.  He finished the season 2-1, but with a 4.93 ERA.  The next season he pitched for Houston, but struggled and was done in the Majors. 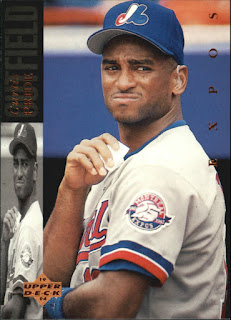 Curtis Pride was in his second stint with the Red Sox in 2000, after a very brief two at-bats in 1997, which included a home run.  Pride was somewhat renowned for making it to the Major Leagues despite being born deaf.  He spent a little more time with the Red Sox in this stint, but that is not saying much.  Pride played in nine games with 21 plate appearances.  He hit .250/.286/.300 with only a double as an extra base hit.  After the season, he returned to Montreal, where he started his career, and continued to bounce between the Majors and Minors, coming up when a team needed a bat off the bench. 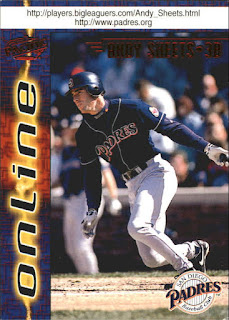 Never really known for his bat, Andy Sheets typically had a job because he was versatile and steady in the field.  He was brought to Boston mostly to serve as the backup shortstop to Nomar Garciaparra but also played a game at first.  Unfortunately, he was completely inept at the plate in 2000, hitting just .095 in 21 at-bats before being sent to the Minors.  Sheets played for the Mariners, Padres, Angels, Red Sox, and Devil Rays in his seven-year career.  He just could not get anything going in his very brief time in Boston.  Sheets does appear in a minor league set with the Red Sox. 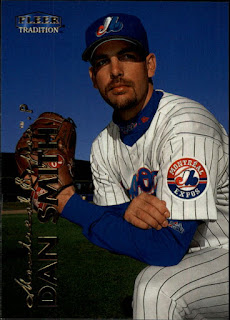 Like Jesus Pena, Dan Smith's career with the Red Sox consists of just two games.  The former Expos right-hander pitched just 3.1 innings while giving up three runs, walking three, and striking out just one.  He had been a starter the year before in Montreal, but pitched in relief for Boston.  Smith spent the next season in the minors before returning to the Expos in 2002 where he actually pitched well out of the bullpen.  He spent another season in the Montreal bullpen in 2003 but was not nearly as impressive and was out of the Majors for good after the season.  Smith does appear in a Red Sox minor league set. 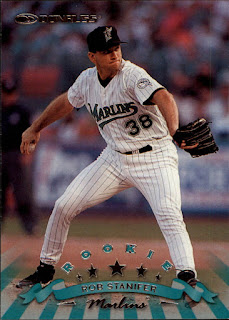 After spending a considerable amount of time in the Marlins bullpen in 1997 and 1998, Rob Stanifer found himself in the minors for the entire 1999 season before making it to Boston early in 2000.  Unfortunately, he did not pitch very well and was sent back down to the Minors where he actually had some good numbers.  It is surprising he was not given another chance in the Majors after that.  Stanifer pitched in just eight games for the Red Sox and was 0-0 with a 7.62 ERA in 13 innings.  Stanifer does appear in some Red Sox minor league sets.

A lot of these players played for just a handful of games for the Red Sox, with a few exceptions.  Hipolito Pichardo, Bernard Gilkey, and Bryce Florie all appeared for a significant chunk of the season and probably should have been given a card by someone.  Gary Gaetti was probably my favorite player that did not get a card.  I always liked him when he played for the Twins, Angels, and Royals.
Posted by Metallattorney at 3:47 PM