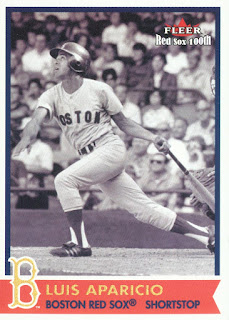 Luis Aparicio is one of a number of players who spent just a short amount of time with the Red Sox.  Aparicio was at the end of his career when he joined the Red Sox.  He spent three seasons with Boston and was released prior to the season in 1974.  That was the end of his Major League career.

"Little Looie" was well-known for his time with the Chicago White Sox and Baltimore Orioles.  He had been an All Star seven times with those two teams and led the league in steals nine times in a row to start his career.  He was the Rookie of the Year in 1956 and won the Gold Glove nine times.  He was second in the MVP vote with the White Sox in 1959.  It was Aparicio's legs and his defense that led him to the Hall of Fame.

In 1970, Boston's middle infield was made up of Rico Petrocelli and Mike Andrews, but management decided to go for a more defensive-minded middle infield, sacrificing some power.  Andrews and Luis Alvarado were sent to the White Sox to acquire Luis Aparicio.  Petrocelli was consulted and agreed to move to third base to make room for Aparicio.  Boston also acquired Doug Griffin to take over at second base.  And thus Boston had a new middle infield.

Aparicio was definitely past his prime in Boston but put up a couple of decent seasons.  He was an All Star in both 1971 and 1972 and even picked up some MVP votes in 1972.  He had his best season for the Red Sox in his final Major League season.  Aparicio never had much power, his career high was 10, and he only hit seven home runs over his three seasons with Boston, and none in his last season.  He did steal nearly as many bases as he had in previous seasons, his high with Boston was 13.

Unfortunately, his time in Boston is remembered for more ignominious moments, both of which occurred in 1972.  That season he went 44 at-bats without a hit, one at-bat away from the record.  In what would have been the record-tying at-bat, he hit a grand slam.  Then, late in the season Aparicio stumbled trying to score on an extra base hit by Carl Yastrzemski and had to return to third.  Yaz was also arriving at third and was tagged out.  Boston lost that game and lost the division by half a game in a strike-shortened season.

Aparicio was at the end of his career with Boston.  The three seasons he spent with them were his last in the Majors.  He still had decent seasons, but nothing quite like the seasons that got him into the Hall of Fame with the White Sox and Orioles.
Posted by Metallattorney at 8:00 AM