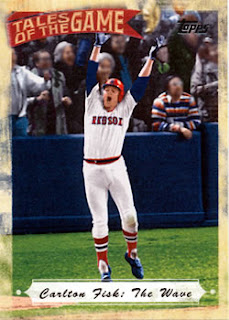 One of the most iconic moments in Boston Red Sox history is the image of Carlton Fisk waving his arms, desperately trying to will the ball he hit in the bottom of the 12th inning of the sixth game of the 1975 World Series to stay fair.  It did, and thus ended one of the greatest World Series game ever played.  It was a moment so unforgettable that it helped lead to Fisk's Hall of Fame plaque depicting him in a Red Sox cap, despite playing 350 more games with the White Sox.

Fisk was a 1st round draft pick by the Red Sox in the 1967 draft and made his Major League debut in 1969.  He played in just two games that year and was hitless in five at bats.  He did not play in 1970 but arrived in the Majors for good in late 1971.  1972 was Fisk's official rookie season and he was unanimously selected as the AL Rookie of the Year after a terrific season that saw him hit .293 with 22 home runs and lead the league in triples.  He was also very impressive defensively and won the only Gold Glove Award of his career.  He also finished fourth in the AL MVP vote.

Fisk's batting average decreased the next season, but his power numbers actually increased.  Unfortunately injuries started interrupting his career in 1974 and 1975.  When he was healthy, Fisk was easily one of the best players in the league.  1975 saw him play in the only World Series of his career and of course, he had his career-defining moment in Game Six.

Healthy again in 1976, Fisk had a tough season.  He hit just .255, but did contribute 17 home runs.  He had a terrific season in 1977, hitting a career high, to that point, 26 home runs and 102 RBIs.  He batted .315 that year, terrific numbers for a catcher.  Fisk continued to play with the Red Sox through the 1980 season.  He is still the team's offensive leader in a number of statistical categories and appeared in seven All Star Games with the Red Sox.

Unfortunately, due to a colossal blunder, Boston management did not mail Fisk a contract by the deadline and he became a free agent.  Contract talks were fairly acrimonious in the first place, but to lose such a great player to a mistake is embarrassing.   Fisk left to join the White Sox and spent the rest of his career there.  Fisk was elected to the Hall of Fame in 2000 and, as mentioned, wears a Red Sox cap on his plaque.
Posted by Metallattorney at 7:00 AM