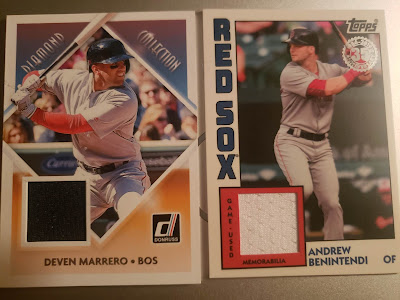 Today's post is a couple of relics of former first round draft picks of the Red Sox.  Neither player is still with the team.  One of them was markedly better than the other.

1.  Deven Marrero.  I remember watching the draft on TV the year Marrero was Boston's first pick and being wholly unimpressed with the pick.  Marrero was a good-fielding, but light-hitting shortstop.  Nevertheless, Marrero made it to the Majors in 2015.  He spent parts of three seasons with the Red Sox and lived up to his reputation.  In those years, he hit just .208/.259/.309 with five home runs, 30 RBIs and seven stolen bases in 109 games.  He was good defensively though.

2.  Andrew Benintendi.  The seventh overall pick in the 2015 Draft looked like he was going to be a star.  He rocketed through the minors and made it to Boston by second half of the 2016 season.  He finished second in the Rookie of the Year vote in 2017 after hitting .271/.352/.424 with 20 home runs, 90 RBIs and 20 stolen bases.  He started off the 2018 great but cooled off considerably in the second half.  He was never the same again in Boston.  He ended up playing through the 2020 season in Boston before being traded to the Royals.  His stats with Boston ended up being a line of .273/.353/.435 with 51 home runs, 53 stolen bases and 260 RBIs.  Certainly decent, but not quite what was expected of him.  He is a free agent this offseason after being traded to the Yankees at the trading deadline.  It will be interesting to see where he ends up next.

Posted by Metallattorney at 9:44 PM